Explainer: Brexit reversed - What is the path back from Brexit?

By Guy Faulconbridge LONDON (Reuters) - To leave, or not to leave: More than two and a half years since the United Kingdom voted to exit the EU, that is still the question. The crisis in Prime Minister Theresa May's government over her draft Brexit divorce deal has stirred interest in the possibility that the United Kingdom could change its mind, or 'regrexit'. 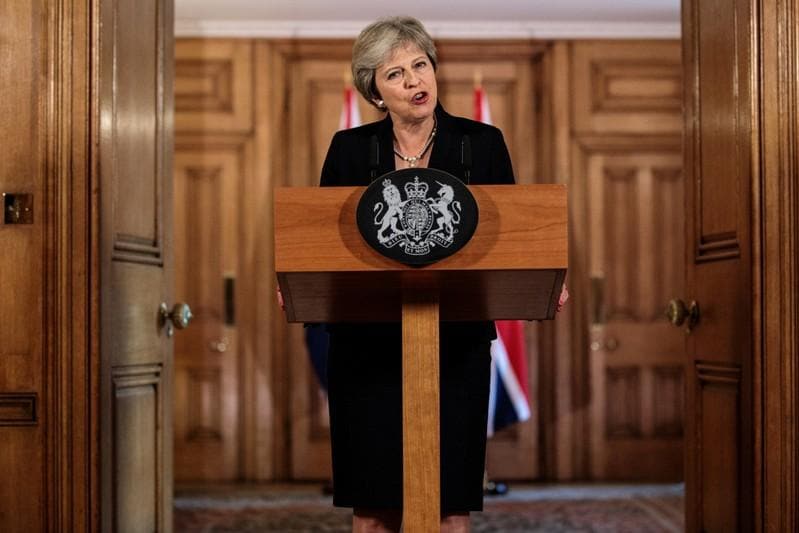 LONDON (Reuters) - To leave, or not to leave: More than two and a half years since the United Kingdom voted to exit the EU, that is still the question.

The crisis in Prime Minister Theresa May's government over her draft Brexit divorce deal has stirred interest in the possibility that the United Kingdom could change its mind, or 'regrexit'.

But ever since, opponents of Brexit have been exploring ways to hold another referendum.

May has repeatedly said there will not be another referendum on membership and the leader of the main opposition party, Jeremy Corbyn, has indicated he is also not in favour.

So what is the path to a second vote?

The first step, according to campaigners, is that parliament rejects May's draft divorce deal.

To leave the EU on the terms of her deal, May would need the backing of parliament.

The size of the rebellion inside her Conservative Party and the anger of her allies in the Northern Irish Democratic Unionist Party indicate she would have trouble passing the deal, even with significant support from Labour Party lawmakers.

"I suspect it will get to parliament and parliament will vote it down and once that happens it will be game on for a People's Vote," said Hugo Dixon, deputy chair of the People's Vote campaign group, which wants another referendum.

"Voting down a deal does not mean we crash out no deal at all; it means we are highly likely to move to a People's Vote with an option to stay in the EU," Dixon said. "The no deal scenario is not likely,"

The collapse of May's deal would thrust the United Kingdom deeper into crisis.

Three of the four former British prime ministers still alive - John Major, Tony Blair and Gordon Brown - have said a second referendum is the way to resolve the crisis.

"I still believe it is possible that Brexit is stopped," Blair told Reuters last month.

The opposition Labour Party, which is also divided over Brexit, has indicated it would seek to trigger a national election if May failed to get parliamentary approval.

But to secure an election, two thirds of the 650 lawmakers in parliament would have to vote for one.

If there is no vote of confidence in that new government, then a new election must be held within about 17 working days, according to the Institute of Government.

Brexit campaigners think Labour would fail to trigger an election.

After what would have been weeks of crisis and the failure of various other options - an election, a new prime minister, attempts to renegotiate with the EU - parliament would finally demand a new referendum.

The exact mechanism is unclear but lawmakers could vote for a motion calling for a new referendum as a way out of the deadlock. That would have to be backed up by legislation calling a referendum.

4) ASKING THE EU FOR TIME

Holding a referendum would take months so the European Union would have to be asked for more time as the United Kingdom is currently on course to leave at 2300 GMT on March 29, 2019.

Key to asking for more time is the question of whether the United Kingdom could withdraw Article 50 of the Treaty of Lisbon nearly two years after May invoked it.

As the clause has never been used before, lawyers have a diverse range of opinions on its reversibility or not.

But the British diplomat who drafted the clause, John Kerr, has repeatedly argued that it can be reversed.

Judges at the European Union’s highest court will hear a case on the Brexit process on Nov. 27, reviewing whether Britain could unilaterally withdraw its decision to leave the EU.

5) WHAT WOULD THE PEOPLE SAY?

Many supporters of Brexit say that holding such a vote would thrust the United Kingdom into its biggest ever constitutional crisis, and possibly even provoke disorder.

While polls and academic research show that the country remains divided, a survey of 20,000 voters published this month showed it would vote to stay in the EU. https://uk.reuters.com/article/uk-britain-eu-poll/regrexit-british-voters-would-now-back-staying-in-the-eu-poll-shows-idUKKCN1NA2KL

Many surveys ahead of the vote incorrectly predicted that Britain would vote to stay in the club it joined in 1973. But a vote to leave in a second referendum would surely mean the country would have to leave.

6) WHAT WOULD BE ON THE BALLOT PAPER?

It's not clear, of course. Jo Johnson, younger brother of Boris, resigned from the government earlier this month, calling for another referendum.

People should be asked "whether they want to go ahead with Brexit now that we know the deal that is actually available to us, whether we should leave without any deal at all, or whether people on balance would rather stick with the deal we already have inside the European Union", he said.

Supporters of Brexit say having two options for Brexit and one for remain would be unfair as it would split the vote for Brexit.

The prospect of the world's fifth largest economy returning to the fold would surely be welcomed by most EU leaders.

European Council President Donald Tusk said this week that the EU is prepared to cancel Brexit.

Opponents of the idea of a second referendum say it would not solve anything even if voters chose to stay in the EU.

Supporters of Brexit would then demand a third, decisive referendum to resolve the question that has haunted the United Kingdom since it lost its empire: Should it go it alone or partner with the European project?