In a first, three baby chimpanzees have been kidnapped from an animal sanctuary in the Democratic Republic of Congo (DRC).

The kidnappers have demanded a six-figure ransom to free the three baby chimps– Monga, César and Hussein, reported The New York Times (NYT).

“This is the first time in the world that baby apes were kidnapped for ransom,” Franck Chantereau, co-founder of the sanctuary where the kidnapping took place, told CNN.

The sanctuary – Young Animals Confiscated in Katanga (shortened to  JACK in French) in Congo’s Lubumbashi – houses 40 chimpanzees and 64 monkeys of 14 species that have been rescued from Congo’s illegal wildlife trade, notes NYT.

How did the kidnapping take place and why were the chimps targeted?

As per CNN, the kidnappers broke into the sanctuary around 3 am on 9 September and took away three of the five baby chimpanzees rescued by Franck this year.

His wife Roxane Chantereau, co-founder of the sanctuary, received three texts and a video on WhatsApp showing two baby chimpanzees moving across a dirty floor covered with tumbled furniture, as per NYT.

As the video panned across the room, the third chimp was seen standing on a dresser with her arms tied over her head.

“They told us that they had planned to kidnap my children because they were supposed to come here on vacation. But they didn’t come so the kidnappers took these three babies hostage and demanded a large amount of ransom from us,” Franck was quoted as saying by CNN.

The kidnappers claimed to have drugged the chimpanzees and threatened to hurt the hostage animals if their demand was not fulfilled. A few days later, Roxane Chantereau again received texts from the kidnappers warning that they will decapitate one of the baby chimpanzees and sell the other two to Chinese traffickers, Franck told NYT.

He stated they have not heard from the abductors for two weeks now which is “worrying” them.

He stated the authorities have taken the case “very seriously” and “consider the robbing of these babies as a security threat for the country,” NYT reported.

Franck said the sanctuary is unable to pay the ransom money, adding that if they heed the demand, this incident is likely to occur again in the coming months. Expressing apprehension, he told CNN there is no guarantee if the chimps will be returned even after the kidnappers are paid.

The authorities are also not in favour of paying the ransom.

Calling the abduction “inhumane and unnatural”, Michel Koyakpa, media adviser to DRC’s environment minister, told CNN, “we will not give in to this kind of demand”.

Koyakpa said the search is on to find the stolen baby chimpanzees.

Notably, Congo, which has a rich biodiversity, offers sanctuaries the same legal protections as national parks.

In 2006, months after the sanctuary was opened, a group of people had broken in and torched the baby chimps’ sleeping place, leading to the death of two of the five apes that were there then, reports CNN.

While in September 2013, the sanctuary’s education center was targeted and set ablaze by miscreants, however, there were no fatalities.

Illegal wildlife trade is not rare in Congo. It is the only country in Africa where all four great apes– chimpanzees, bonobos, western gorillas and eastern gorillas–  are found.

Congo has become a hotspot for wildlife trafficking.

The illegal trade of ivory, rhino horn, pangolin scales, and poaching of live baby chimpanzees, gorillas and bonobos has become rampant in Congo amid increase in demand for primates in China, Pakistan, Egypt and the United Arab Emirates, Franck told NYT. 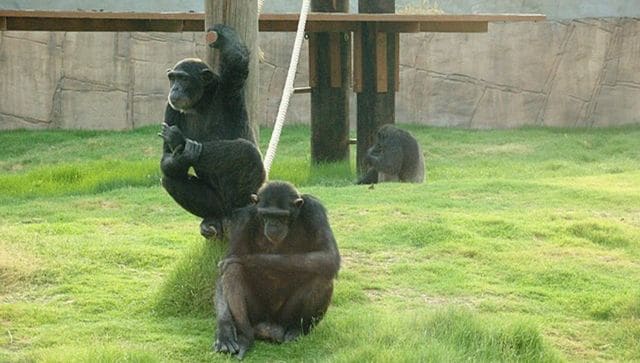 This is the first time that an ape has been kidnapped from a sanctuary in Africa for ransom. Wikimedia Commons (Representational Image)

However, this is the first time that an ape has been kidnapped from a sanctuary in Africa for ransom.

Franck said the buyers of these exotic animals are mostly rich people. He added that they do not understand the consequences of their action as to capture one baby, an entire family of up to 10 adults is killed by poachers.

Experts fear that if the kidnappers are not punished, there can be more kidnappings for ransom. “If they get away with this, these cases are going to happen over and over again,” Adams Cassinga, founder of Conserv Congo, a nonprofit group battling wildlife trafficking in DRC, told NYT.

He said the Congo government and global community must come together and send a stern message that such incidents will not be “tolerated”.

After the incident took place, the main gate of the zoo was immediately closed and the chimp was wandering around inside the zoo

Chimps aren’t just famous for imitating humans but also adapt very quickly to what they witness and experience.

This model will help in tracking endangered animals and those that have a high risk of being trafficked.