Explained: The historical significance of Westminster Abbey where Queen Elizabeth’s funeral was held

One of the most iconic landmarks in London, the Westminster Abbey is steeped in royal family history. This over 700-year-old church was a witness to Queen Elizabeth II's coronation as well as her wedding. It is where she ends her journey as a funeral service is held

The coffin is placed near the altar at the State Funeral of Queen Elizabeth II, held at Westminster Abbey. AP

After a long reign of 70 years, Queen Elizabeth II’s time will come to an end today as her funeral will be held inside Westminster Abbey in London.

Around 2,000 people are expected to attend, including members of her family — like Prince William and Prince Harry — and world leaders, like US President Joe Biden.

It has been 70 years since the death of the previous monarch, Queen Elizabeth II’s father George VI. The Queen’s funeral, taking place in the digital age, will be incomparable in scale and much more accessible.

The man in charge of the operation, the Earl Marshal, the Duke of Norfolk, said the state funeral will “unite people across the globe and resonate with people of all faiths”, and pay a “fitting tribute to an extraordinary reign”. 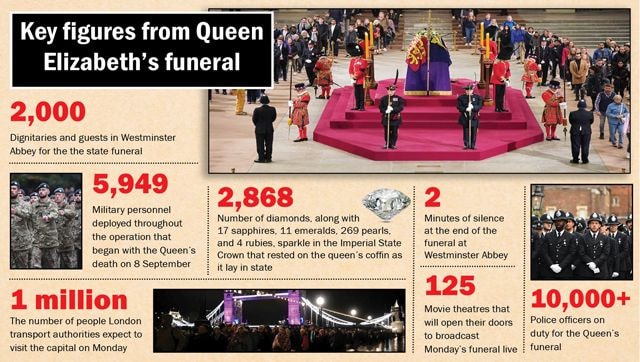 Westminster Abbey — an architectural masterpiece — one of the most iconic landmarks in London, is steeped in royal history; since the coronation of William the Conqueror in 1066, all coronations of English and British monarchs have occurred in Westminster Abbey. Also, it has been the site of royal weddings as well as the burial site of past monarchs.’

Also read: Explained: What is the Royal Vault, where the Queen will be laid to rest? Who else is buried there?

But if you’ve ever wanted to know more about the Abbey, from its slightly doomed history to how it is part of British monarchy, read on…

The origins of Westminster Abbey (or the Collegiate Church of St. Peter, Westminster to give it its correct title) can be traced back to the 1040s, when King Edward (later St. Edward the Confessor) established his royal palace by the banks of the river Thames on land known as Thorney Island.

Nearby a small Benedictine monastery founded under the patronage of King Edgar and St. Dunstan around 960 AD.

This monastery Edward chose to re-endow and greatly enlarge, building a large stone church in honour of St. Peter the Apostle. This church became known as the “west minster” to distinguish it from St. Paul’s Cathedral (the east minster) in the City of London. Unfortunately, when the new church was consecrated on 28 December 1065, the King was too ill to attend and died a few days later. His mortal remains were entombed in front of the High Altar. The Western Towers at Westminster Abbey are gothic in style. AP

The abbey of Edward’s vision survived for two centuries until the middle of the 13th century when King Henry III decided to rebuild it in the new Gothic style of architecture.

Under the decree of the King Henry III, Westminster Abbey was redesigned to be more than a monastery and place of worship, but also a place for the coronation and burial of monarchs.

This church was consecrated on 13 October 1269. But, once again, another king died before the nave could be completed.

The older structure of Edward the Confessor stood attached to the Gothic building of Henry III for many years.

Two centuries later, the western towers were finally completed in 1745, to a design by Nicholas Hawksmoor. Inside the abbey, one of the first significant areas is called the nave. That’s where the tomb of an unknown British soldier who died in France during World War II is located. Westminster Abbey also presents a unique pageant of British history – the shrine of St Edward the Confessor, the tombs of kings and queens, and countless memorials to the famous and the great. AP

Located inside the nave is also the Scientists’ Corner, where some of the greatest British scientific minds have been laid to rest as well as the Poets’ Corner, where more than 100 writers and poets, including William Shakespeare and Jane Austen, have been memorialised.

The abbey that stands before us was almost destroyed during World War II when firebombs rained down on London.

Although the abbey wasn’t directly hit, parts of its roof were consumed by flames started by German firebombs in 1941. According to the BBC, Winston Churchill — who was prime minister at the time — said “the abbey must be saved at all costs”.

Since its construction, the abbey has been part of history for the monarchy. Since 1066, all British monarchs except two (Edward V and Edward VIII) have been crowned at the Abbey. The ancient Coronation Chair can still be seen in the church.

It is also the final resting place of 13 kings, four queens regnant, 11 queens consort (those married to a king) and two other queens buried in the Abbey making a total of 30. The first royal to be buried here was Edward the Confessor whose magnificent shrine stands at the centre of the church.

Queen Elizabeth II’s mother, Queen Elizabeth I is also buried here, along with her half-sister, the Catholic Queen Mary I. On the floor beside their tomb is the inscription: “Remember before God all those who divided at the Reformation by different convictions laid down their lives for Christ and conscience sake.” Princess Diana’s funeral was held at Westminster Abbey and on her wish she was buried at her family home at Althorp. Image Courtesy: westminster-abbey.org

There are also other notable figures such as Jane Austen, Isaac Newton, Charles Darwin, Sir Winston Churchill who are buried at the Abbey.

The funeral of Princess Diana, mother of princes William and Harry, in 1997 also took place at Westminster Abbey and by her own wish she was buried at her family home at Althorp.

The architectural wonder has also been the scene of royal weddings — most of them since World War I.

The first was when King Henry I married princess Matilda of Scotland on 11 November 1100.

And Queen Elizabeth II married Philip Mountbatten in the abbey in 1947, bringing some royal colour to the post-World War II recovery years. Westminster Abbey also served as the site where Queen Elizabeth married Prince Philip, the Duke of Edinburgh in 1947. AFP

Queen Elizabeth’s sister, Princess Margaret, and her children Princess Anne and Prince Andrew all got married in the abbey.

The last royal wedding was that of Charles’ eldest son Prince William, who wed his university sweetheart Kate Middleton in 2011. 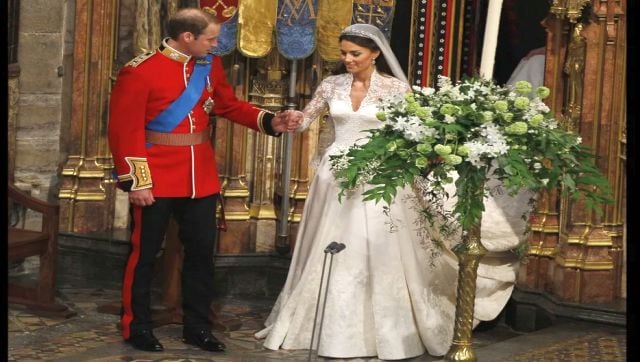 Queen’s mark on the Abbey

The Westminster Abbey has played a major role in Queen Elizabeth II’s life. Key milestones in her life have been marked here.

The late monarch’s wedding to Prince Philip, the Duke of Edinburgh, on 20 November 1947 took place at the Westminster Abbey. The ceremony was broadcast on the radio to millions of listeners, and there were 2,500 guests at Westminster, including six kings and seven queens.

On 2 June 1953, she ascended the crown at the Abbey in a ceremony, which was televised to millions. Elizabeth II was crowned at the abbey on 2 June 1953, more than a year after becoming queen. AFP

Queen Elizabeth’s record reign is also celebrated in a stained-glass window unveiled in September 2018. Designed by David Hockney, it represents the Yorkshire countryside in the spring.

Queen Elizabeth II’s funeral at the Abbey is also a break in traditions. This is the first funeral service for a monarch to take place at Westminster Abbey since the ceremony for King George II in 1760, as they were later held at Windsor. However, the funerals for both Princess Diana and the Queen Mother took place here in 1997 and 2002 respectively.

It is thought the move was chosen by the Queen herself, according to reports, as the venue can hold more people and the London location is better to accommodate crowds.

20 November historical events: Check some major incidents that took place on this date

On 20 November 1995, the famous interview of Princess Diana with Martin Bashir was aired on BBC. The episode was special and is remembered for Diana's confessions on everything including her marriage, Charles' affair, and her own extramarital relationships