Hijab, travel restrictions and more: How Iranian women's freedom has been curtailed since 1979 Islamic Revolution

Mahsa Amini, a 22-year-old Kurdish woman, died after being detained by the morality police in Iran reportedly for not wearing her hijab properly. Her death has sparked protests in Iran, where freedom for women is curtailed. But this was not always the case

Hijab is mandatory for women in public after the 1979 Islamic Revolution. AFP File Photo

The death of Mahsa Amini, a 22-year-old Kurdish woman, has once again catapulted Iran’s conservative rules on dress code under global scrutiny.

Amini was detained by the morality police in Tehran last Tuesday for not wearing the hijab (Islamic headscarf) properly, which is compulsory for Iranian women. She slipped into a coma and died while in police custody.

While the police have claimed she died of a heart attack, her family has alleged Amini was beaten up during her detention.

Amini’s death has witnessed Iran explode with anger with demonstrators demanding a probe into the case and the dismantling of the morality police.

Some women posted clips of themselves chopping off their hair and burning their hijabs on social media to express their anger and protest the government. 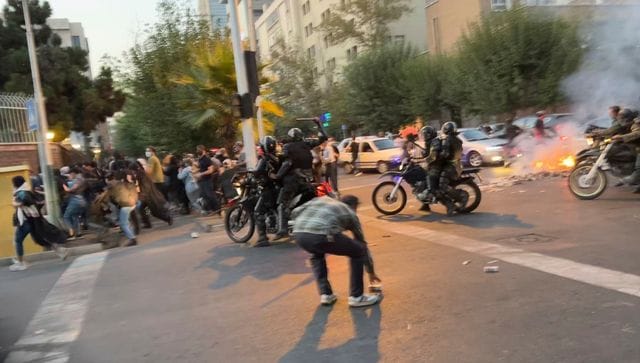 However, Iran did not always have such stringent dress rules for women.

Before the 1979 Islamic Revolution, women in the country enjoyed similar rights to their male counterparts.

Let’s see what changes have the Iranian women witnessed since the revolution:

Before the 1979 Islamic Revolution, the hijab was still prevalent in Iran. However, women could wear Western-style clothes including tight-fitting jeans, dresses, miniskirts and short-sleeved tops in public, as per BBC.

Afterwards, men were no longer seen in hair salons for women, a common sight during the monarchy.

Women were also forced to cover their hair as soon as they step out.

“Nowadays you wouldn’t see a man inside the hairdressers – and women would know to cover up their hair as soon as they walked out the door. Some people may also operate secret salons in their own homes where men and women can mix,” baroness Haleh Afshar, a professor of women’s studies at the University of York, was quoted as saying by BBC.

The hijab was made mandatory for Iranian women in the early 1980s. The morality police is in charge of enforcing the dress code and other restrictions.

The force has come under fire several times for its harsh treatment of young women.

Women are also mandated to wear a coat to cover the body when out in public.

Those who do not adhere to the dress code can be subjected to two months in prison, fined up to 500,000 rials and up to 74 lashes, as per The Iran Primer.

As per a 2019 US state department report, women activists who have opposed the strict hijab law have been sentenced to harsh punishments by the courts.

Among such cases was one of human rights attorney Nasrin Sotoudeh — sentenced to 38 years in prison and 148 lashes in 2018 for extending legal defence services to women prosecuted for not wearing hijab.

As Khomeini came to power, the modern lifestyle in Iran was replaced with orthodox beliefs.

However, the Iranian parliament raised the age to 13 for marriage in 2002, notes The Iran Primer.

Married women cannot leave the country or even obtain a passport without their husband’s written permission, while single females need their father’s approval. A man has the choice of where his family lives and can forbid his wife from taking certain jobs if he considers them against “family values”, according to The Iran Primer.

“A woman can reach high positions in her career. Yet, a married woman cannot travel without her husband’s permission. This leads to interesting paradoxes,” writes Shirin Ebadi for The National.

Men could now easily divorce their wives by a verbal utterance, while women have to approach courts to get a divorce.

In 2002, the parliament amended the law to let a woman file for divorce if her husband was imprisoned, mentally ill, physically abusive or an addict, as per The Iran Primer.

Moreover, polygamy is permitted for men. An Iranian man can marry up to four women while a woman can have one husband.

A woman has custody right over children under seven.

For offspring above seven, the court will decide which parent will be granted custody of the child.

If a divorced woman remarries, she will lose custody even if her husband is deceased.

When Family Protection Law was in force, men did not automatically gain custody of the children.

Sports is another arena that has seen a drastic change since the 1979 revolution.

Even though there is no official ban on women, they are often refused entry where men are playing. Before this, the World Cup qualifier three years ago was the last men’s match they had seen, as per BBC.

WATCH: How Iranians are 'striking' at the regime with time-tested 'hartal'

Locals have shut shops across Iran as part of a strike. According to the People's Mojahedin Organization of Iran, 640 people have been killed & more than 30,000 arrested by the security forces over the protests

Taslima Nasrin writes: Why Islamic fundamentalists use hijab as a political tool to crush women’s rights and freedom

There may be major differences between Shias and Sunnis but there are hardly any contradictions in their fundamentalist nature, with their common target being women