Explained: As floods wreak havoc in Pakistan, will India extend a helping hand?

India is reportedly holding high-level talks and mulling the possibility of providing humanitarian assistance to Islamabad amid devastating floods that have claimed more than 1,000 lives and affected over 30 million Pakistanis

India is likely to extend assistance to Pakistan amid devastating floods. AP

After three years of a trade ban imposed by Pakistan following the abrogation of Article 370, the nation is likely to resume commercial relations with India amid one of its worst floods in recent history.

Let’s find out the developments surrounding the major move and why was the trade ban imposed:

As per Indian Express report, discussions are being held at the topmost level to extend aid to India’s neighbour. However, top officials are yet to decide.

If it comes to fruition, this will be the first time since the Narendra Modi-led NDA government assumed power in 2014 that India will extend aid to Pakistan in the wake of a natural disaster.

Pakistan has not approached India formally for help even though one of its ministers backed the idea of Islamabad importing food materials from New Delhi, as per NDTV.

Prime Minister Narendra Modi on Monday, in his first reaction to the floods in Pakistan, said he was “saddened” and “hoped for an early restoration of normalcy”.

“Saddened to see the devastation caused by the floods in Pakistan. We extend our heartfelt condolences to the families of the victims, the injured and all those affected by this natural calamity and hope for an early restoration of normalcy,” Modi said in his tweet.

Saddened to see the devastation caused by the floods in Pakistan. We extend our heartfelt condolences to the families of the victims, the injured and all those affected by this natural calamity and hope for an early restoration of normalcy.

“We will open duty-free import, make it easier and I also want to say that we will consider importing through the land border with India because these prices [of vegetables] are not sustainable,” Pakistan media quoted Ismail as saying, as per The Hindu. 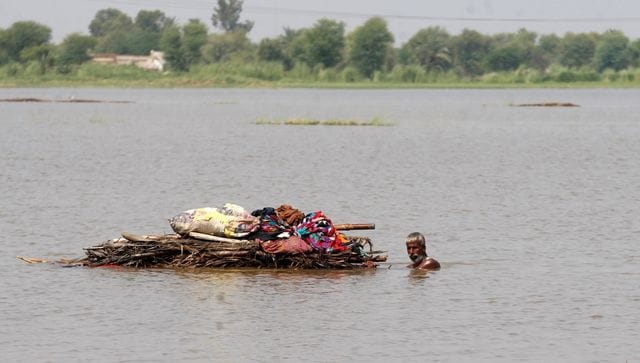 Floods in Pakistan have claimed over 1000 lives and affected 33 million people. AP

Earlier, when the Congress-led UPA government was in power, India had extended aid to Pakistan during the 2010 floods, and after the earthquake in 2005.

On 19 August, 2019, Pakistan had called off trade ties with India under the leadership of then prime minister Imran Khan as a protest against the abrogation of Article 370, which provided special status to Jammu and Kashmir.

There were only a few exceptions to this trade ban; during the outbreak of the COVID-19 pandemic, Pakistan allowed import of pharmaceutical products in May 2020.

Islamabad also opened its land route for India to ship 50,000 tonnes of wheat as humanitarian aid to Afghanistan in June.

After Shehbaz Sharif came to power in April, the Pakistan government appointed trade counsellor to its High Commission in Delhi, however, denied reports of any change in the trade policy, as per Dawn.

In spite of a trade ban, India’s exports to Pakistan had more than doubled to $142 million in the April-May period as compared to the previous year’s figure of $70 million, as per Business Standard report in July.

As per the report, Pakistan imported 282 products from India, including 67 pharmaceutical items during the first two months of the financial year 2023. The other items India exported comprise textiles, mineral fuels, organic chemicals, coffee, tea, spices, rubber, fruits and vegetables, iron and steel, among others.

The deluge in Pakistan has affected 110 of the 150 districts, hit 33 million people – one in seven Pakistanis– and destroyed livestock, homes and crops. Pakistan’s prime minister Shahbaz Sharif has declared an emergency and sought international aid to tackle the crisis.

The United Nations (UN) on Tuesday appealed for $160 million in emergency funding for Pakistan, BBC reported. 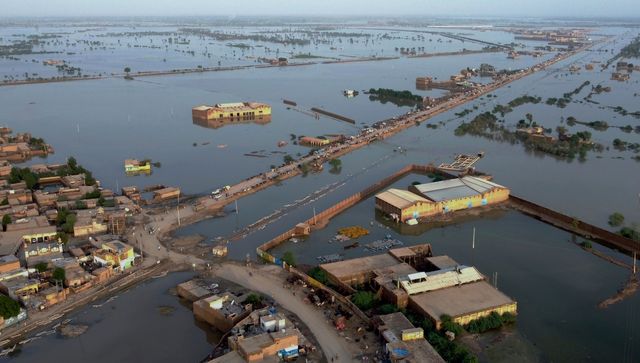 UN secretary general has said that Pakistan is facing ‘a monsoon on steroids’. AP

UN secretary-general Antonio Guterres has said that Pakistan is facing “a monsoon on steroids”.

“Let’s stop sleepwalking towards the destruction of our planet by climate change. Today, it’s Pakistan. Tomorrow, it could be your country,” Guterres said in a video message.

The country’s planning minister has said that as per estimates, the floods have caused damage of at least $10 billion.