By Jonathan Landay and Phil Stewart WASHINGTON (Reuters) - Secretary of State Mike Pompeo is accelerating a plan to cut up to half of the workforce at the U.S. 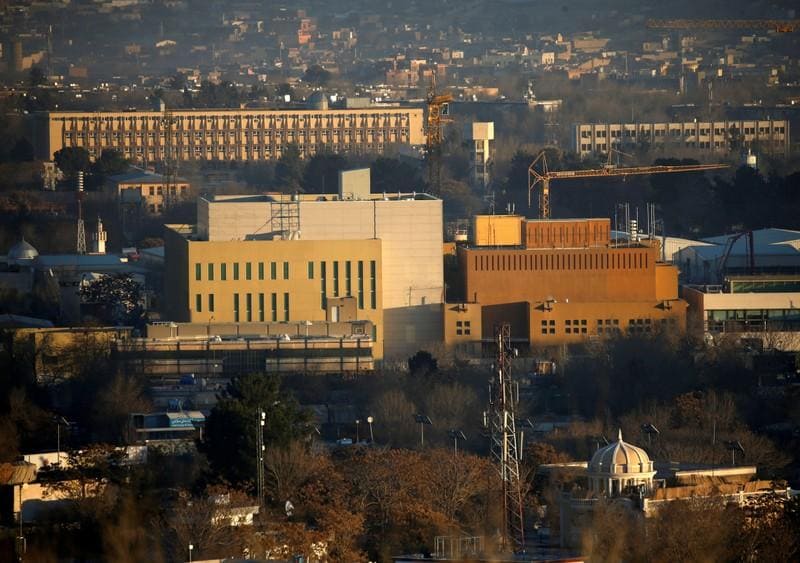 By Jonathan Landay and Phil Stewart

WASHINGTON (Reuters) - Secretary of State Mike Pompeo is accelerating a plan to cut up to half of the workforce at the U.S. embassy in Kabul starting at the end of next month, sparking concern it will undermine the fragile Afghan peace process, U.S. officials and congressional aides said.

Pompeo’s order for the largest U.S. diplomatic mission comes about a year earlier than expected, a surprise development given the meager progress in U.S. talks with Taliban militants on an agreement that would pave the way for a U.S. troop withdrawal and an end to America's longest war.

The Taliban, their negotiating leverage bolstered by U.S. President Donald Trump’s public impatience to end the war, could dig in further because they would regard a large embassy drawdown as more confirmation of his eagerness to reduce the U.S. role in Afghanistan.

The Kabul embassy is a testament to the size of America's investment in Afghanistan since it went to war there in 2001 after the September 11 attacks. With a workforce of about 1,500, the heavily fortified compound underwent an $800 million expansion four years ago and now includes 700 beds for staff.

One U.S. official said the reduction should be seen as part of a global redistribution of U.S. diplomats required by the Trump administration's national security strategy shift from emphasizing counter-terrorism to confronting renewed "great power" rivalry with Russia and China.

But a drastic embassy workforce cut - which State Department officials briefed key congressional committees about last week in advance of a formal notification - will likely reverberate throughout Afghanistan.

It could erode a strained U.S. relationship with Afghan President Ashraf Ghani's government a month after the allies publicly clashed over Kabul's exclusion from the negotiations with the Taliban in Doha, Qatar.

Ghani "would see this as another step in a betrayal," said Thomas Lynch, a U.S. National Defense University fellow focused on Afghanistan and former adviser to the U.S. military's Joint Chiefs of Staff.

U.S. officials and congressional aides said that among the concerns about a major drawdown was the risk that it could alarm NATO allies, already at odds with Trump over a host of issues, and ordinary Afghans.

A State Department spokeswoman said in an email when asked about the planned embassy cuts that the department "regularly reviews our presence at our overseas missions to reflect changing circumstances and our policy goals."

Trump's priorities are "ending the war in Afghanistan through a sustainable peace settlement and focusing on counterterrorism," she said, adding that Washington will maintain "a robust" presence in Afghanistan.

She did not explain why Pompeo moved up the embassy staff reduction plan.

U.S. negotiator, Zalmay Khalilzad, has reported some progress toward an accord on a U.S. troop withdrawal and on how the Taliban would prevent extremists from using Afghanistan to launch attacks as al Qaeda did on Sept. 11, 2001.

The insurgents, however, so far have rejected U.S. demands for a ceasefire and talks on the country's political future that would include Afghan government officials.

News that Washington was examining a workforce cut in Kabul first was reported by National Public Radio in February. Foreign Policy magazine reported earlier this month that the State Department was preparing to reduce personnel by half in 2020.

Now, the reduction "is starting as soon as May 31 and they want to have it done by September," said one congressional aide.

Four other sources, including three U.S. officials, confirmed the plan to reduce the embassy staff by up to half. One said it would be achieved by not filling posts that regularly go vacant.

Pompeo's order was not accompanied by a justification, such as cost-cutting, said a U.S. official and a congressional aide.

"You have to have some parameters, some guidelines, and there weren’t any," said the U.S. official, adding that Pompeo’s directive triggered "shock and stupefaction" in the State Department when it was issued about two weeks ago.

The congressional aide said that when asked to justify the drawdown in congressional briefings last week, State Department officials said,

India says it may allow some foreign flights to resume after U.S. criticism

By David Shepardson WASHINGTON (Reuters) - India's ministry of civil aviation said on Tuesday it was considering allowing some international carrier flights to resume after Washington accused India of "unfair and discriminatory practices." The Indian ministry said in a statement posted on Twitter that as "we move from controlled and managed aviation evacuation of our citizens in different parts of the world and foreign nationals from India, we are now looking at the possibility of establishing bilateral arrangements." The U.S. Transportation Department issued an order Monday to require Indian air carriers to apply for authorization prior to conducting charter flights beginning in 30 days. The department sought "to restore a level playing field for U.S.

By Devik Jain and Medha Singh (Reuters) - Wall Street's three major indexes rose on Tuesday as improving economic data and the prospect of more stimulus bolstered hopes of a swift recovery, while a jump in technology shares powered the Nasdaq to another record high. White House advisor Larry Kudlow said tax rebates and direct mail checks are on the table in the next coronavirus relief bill.