By Orhan Coskun and Humeyra Pamuk ANKARA (Reuters) - The surprise deal to suspend Turkey's military offensive against Kurdish-led forces in Syria hinged on President Tayyip Erdogan's demand that Washington agree a time limit on any ceasefire, a senior Turkish official said on Friday. U.S. Vice President Mike Pence announced the five-day pause in Turkey's cross-border assault after more than four hours of talks on Thursday at Erdogan's presidential palace in Ankara - a meeting that began inauspiciously with stony faces and few smiles. 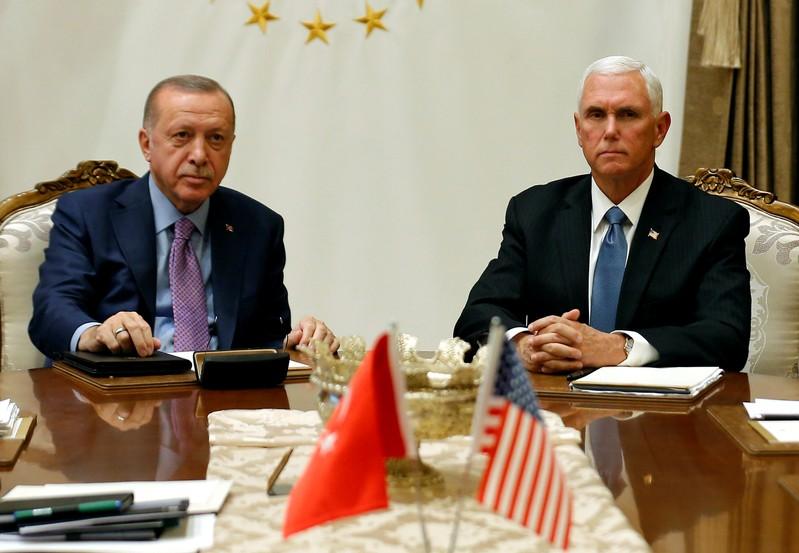 By Orhan Coskun and Humeyra Pamuk

U.S. Vice President Mike Pence announced the five-day pause in Turkey's cross-border assault after more than four hours of talks on Thursday at Erdogan's presidential palace in Ankara - a meeting that began inauspiciously with stony faces and few smiles.

Despite the sombre start, officials from both sides say a draft accord had already been sketched out ahead of the meeting, but crucial obstacles remained ahead of a deal to halt the latest battle in Syria's ruinous eight-year civil war.

The goal was to stem a fresh humanitarian crisis which has put 200,000 civilians to flight in northeast Syria and ease a security scare over thousands of Islamic State captives guarded by the Kurdish militia targeted in Turkey's assault.

Also in the balance were fractious ties between Turkey and the United States, two NATO allies whose disputes over Syria policy and Russia led U.S. President Donald Trump to announce sanctions and threaten to "obliterate" Turkey's economy.

"It was obvious that Pence's talks in Turkey would not be easy," the official told Reuters.

Even before his plane landed in Ankara, Turkey had rejected Pence's call for a ceasefire unless Kurdish YPG fighters, whom it considers terrorists because of their links to guerrillas waging a deadly insurgency in southeast Turkey, agreed to withdraw from a 20-mile deep "safe zone" along the border.

"There were many disagreements" in the talks, the senior official said, declining to be named because of the sensitivity of the matter. But the central issue was Turkey's insistence that there could be no open-ended truce.

"The make-or-break point in the meeting was when Erdogan demanded a deadline if they wanted the operations to be paused," he said. "Erdogan said it could be 24 or 48 hours. Pence said it was a very short frame and he couldn't make that decision by himself."

With the Turkish president refusing to give ground, the issue was taken up in a second, expanded meeting.

"Following discussions, a deadline of 120 hours was agreed on. Once this was settled, there was fast progress on other issues," the official said.

A senior U.S. administration official said: "At one point, Erdogan asked how long it would take (the) YPG to pull out and we (the U.S. delegation) took that as a glimmer of hope that the Turks were open to a deal."

Pictures of the start of the meeting between the U.S. vice president, an evangelical Christian, and the Turkish president who leads a party with Islamist roots, suggested an awkwardness between the two men.

But early in the conversation Pence told Erdogan that Trump "liked, respected and valued" him, according to the Turkish official, an introduction which he said "warmed the atmosphere".

At another point in the talks, when Turkish officials cited their battle casualties in the week-old military operation, Pence told them there were military veterans in the U.S. delegation and his own son was in military service.

He conveyed U.S. condolences to those killed and to their families, a gesture which the U.S. official said appeared to move a Turkish general in the meeting.

Those personal connections may have helped ease some of the tensions in a relationship frequently characterised by uncompromising rhetoric from both sides.

The agreement has de-escalated tensions in the north of Syria, but there are signs the temporary truce remains fragile.

On Friday morning, shelling could be heard near the Syrian town of Ras al Ain close to the border with Turkey, although Reuters journalists in the area said the bombardment subsided by mid-morning.

And there was confusion over how big the "safe zone" is that Turkey intends to secure. Erdogan said the swathe of land ran 440 km from east to west, but U.S. special envoy for Syria, James Jeffrey, said the accord covered a smaller area.

On the eve of Thursday's talks, the White House released a letter Trump sent to Erdogan warning him on Oct. 9 - the day Turkish troops crossed into northeast Syria: "Don't be a tough guy" and "Don't be a fool", and repeating a warning that Trump could destroy Turkey's economy.

"It's really strange to talk to somebody like Erdogan in this tone, and expect him to accept this," a second Turkish official said.

The tone of the letter was a particular surprise in Ankara, since Turkish officials have repeatedly said that the two presidents have a strong personal bond.

"Trump and Erdogan would have made a deal sooner if it was up to Trump," the second official said. "But Pence made a massive contribution."