Exclusive: Pentagon presses ahead with Afghanistan troop drawdown despite law barring it

By Jonathan Landay and Idrees Ali WASHINGTON (Reuters) - The U.S. military has not halted a U.S 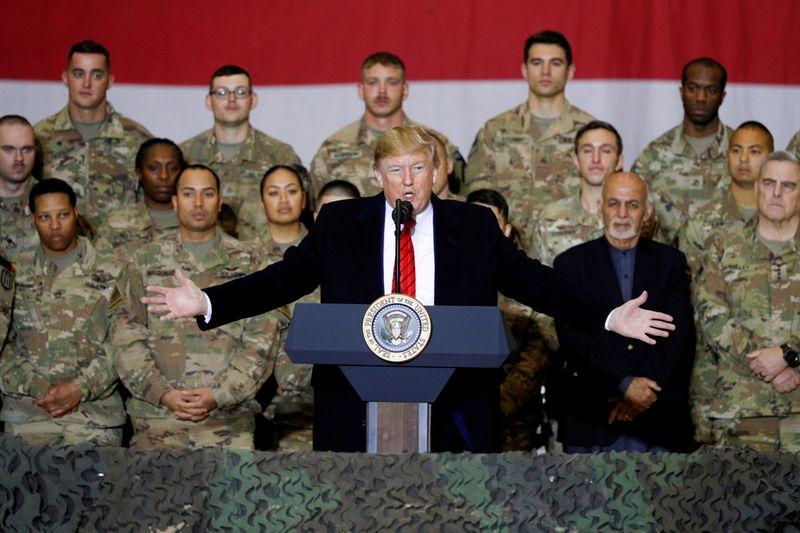 By Jonathan Landay and Idrees Ali

WASHINGTON (Reuters) - The U.S. military has not halted a U.S. troop withdrawal from Afghanistan, the Department of Defense told Reuters on Monday, despite a new law prohibiting further reductions without the Pentagon sending Congress an assessment of the risks.

"Currently, no new orders have been issued which impact the progression of the conditions-based drawdown expected to reach 2,500 (troops) by Jan. 15, 2021," it said in a statement.

The Pentagon's action will likely anger Republican and Democratic lawmakers opposed to further troop cuts and renew concerns about the outgoing Trump administration's disdain for Congress, even in its waning days.

"If they are continuing the drawdown, that would be a violation of the law," said a congressional aide, speaking on the condition of anonymity.

Halting the drawdown could jeopardize the U.S.-backed Afghanistan peace process as a February 2019 agreement with the Taliban calls for a complete U.S. troop withdrawal by May in return for the insurgents fulfilling security guarantees.

In November, the Pentagon said it would reduce the number of U.S. forces in Afghanistan from 4,500 to 2,500 by mid-January.

But this month Congress enacted a defense policy bill - overriding a veto by President Donald Trump - that bars using funds appropriated for fiscal years 2020 and 2021 to pay for a drawdown below 4,000 U.S. troops until acting Secretary of Defense Christopher Miller submits to Congress a "comprehensive, interagency assessment of the risks and impacts."

It is unclear how many troops have been moved out of Afghanistan since the law passed.

One defense official, speaking on condition of anonymity, said the U.S. troop level already is close to 3,000.

The legislation also requires a risk assessment before the number of U.S. troops can be reduced below 2,000.

The Pentagon said it was "evaluating" the impact the legislation would have on U.S. troop strength in Afghanistan.

The legislation gave Trump emergency waiver power to continue the drawdown. But it said that he must tell Congress why a waiver is "important" to the national interest and provide a detailed explanation as to why.

The congressional aide said the White House has provided no such waiver communication.

Some U.S. military officials urged Trump not to cut the force amid a surge in violence in Afghanistan and what they said was the Taliban's failure to end cooperation with al Qaeda as required by the February 2020 agreement with the insurgents.

Another U.S. official said the drawdown was already under way when the law went into effect, and it was not something that could be changed "at a drop of a hat."

The official did not rule out the law slowing down the withdrawal before Trump leaves office on Jan. 20, when he is succeeded by Democrat Joe Biden, the winner of the Nov. 3 presidential election.