Exclusive: Nearly a fifth of enrollees in Pfizer, BioNTech COVID-19 vaccine study are Black or Latino

(This August 21 story corrects in fourth from last para, corrects percentages of people with fever in trial) By Julie Steenhuysen and Michael Erman CHICAGO/NEW YORK (Reuters) - Nearly a fifth of 11,000 people enrolled so far in a 30,000-volunteer U.S. trial testing a COVID-19 vaccine from Pfizer and German partner BioNTech are Black or Latino, groups among the hardest hit by the coronavirus virus pandemic, a top Pfizer executive said. 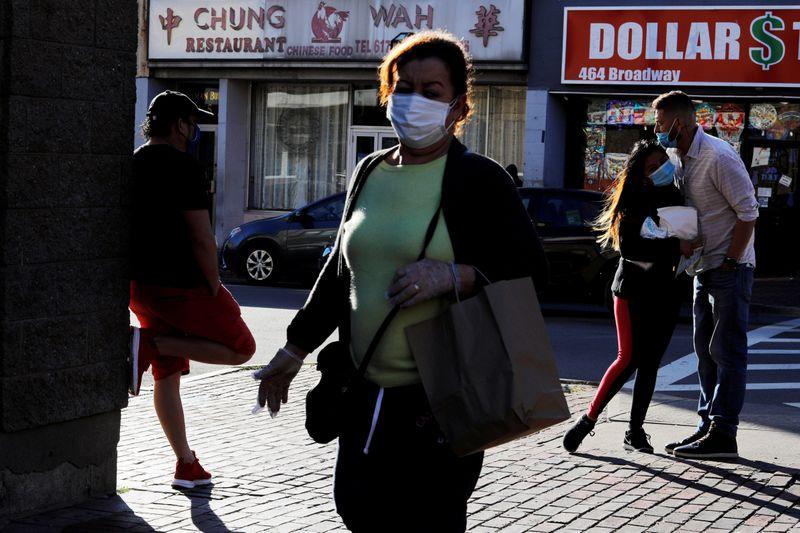 (This August 21 story corrects in fourth from last para, corrects percentages of people with fever in trial)

By Julie Steenhuysen and Michael Erman

CHICAGO/NEW YORK (Reuters) - Nearly a fifth of 11,000 people enrolled so far in a 30,000-volunteer U.S. trial testing a COVID-19 vaccine from Pfizer and German partner BioNTech are Black or Latino, groups among the hardest hit by the coronavirus virus pandemic, a top Pfizer executive said.

"Between Latinx and Black or African American populations, we're running at about 19 percent or so," Dr. Bill Gruber, Pfizer’s senior vice president of vaccine clinical research and development, told Reuters in an interview.

"We're trying to push even higher than that."

Black and Latino Americans are infected with COVID-19 at more than twice the rate of white Americans, with Native Americans infected at even higher rates, research has shown. The groups are historically underrepresented in clinical trials.

The companies' vaccine has quickly advanced into late-stage testing, with some participants already getting their second of two doses.

Physicians and scientists have been urging companies testing coronavirus vaccines to include Black, Latino and indigenous Americans in COVID-19 vaccine trials in hopes of building trust among at-risk populations.

"We have a lot of campaigns to reach out to those communities because they are overrepresented in terms of COVID-19 illness, so we are very keen to have those individuals as part of our trial," Gruber said on Thursday. "They have higher attack rates and they are most likely to benefit."

According to a Reuters/Ipsos poll in May, only half of Black Americans said they were somewhat or very interested in taking a COVID-19 vaccine.

Gruber did not disclose the number of Native Americans enrolled in the trial, but said Pfizer plans to draw on ties from its Prevnar 7 pneumococcal vaccine tests in the southwestern United States.

"I'm hopeful we'll be able to make further inroads in that community as well," he said.

Pfizer and BioNTech expect to have data sufficient for an emergency use authorization (EUA) or to start a full submission in October, according to Gruber.

The company does not need to finish recruiting the full 30,000 patients planned for the trial in order to have enough data to support an EUA, he said.

The U.S. Food and Drug Administration (FDA) has said COVID-19 vaccine trials need to have a safety database of at least 3,000 individuals for each of the younger and elderly populations in which it is tested.

Ultimately, the speed with which the vaccine can be approved depends on how quickly patients in the placebo arm become infected with the virus, starting about a week after the second dose is administered. That began this week.

"We won't really know until we get a little farther," Gruber said.

"We're following the rules that assure rigor," he added, saying the company was taking no short cuts.

"I can't tell you what will happen politically," Gruber said, when asked about concerns the Trump administration might pressure companies and regulators to announce progress before the November election.

Gruber said the companies were now in talks with the FDA about how to begin testing the vaccine in children, a group the regulatory agency itself is eager to gather data on.

Roughly 17% of adults between the ages of 18-55 in Pfizer's most recent trial had fevers after being given the vaccine, most of them mild, compared with 8% among those aged 65-85.

There is a risk those reactions could be even more heightened in younger populations, he added.

“Younger children - maybe that's not going to be tolerated. Maybe we're going to have severe fevers," he said. "That's why we're adopting a very thoughtful, graduated approach. Children are not just small adults."

Gruber said the company is submitting safety data to the FDA and working out a testing plan for children, which he expects to start soon.