By Khalil Ashawi IDLIB CITY, Syria (Reuters) - Russian-backed Syrian government forces will be able to advance all the way to the Turkish border if they pierce rebel defences in the northwest, a top opposition official said, urging Turkey to do more to shield the area from a major attack. 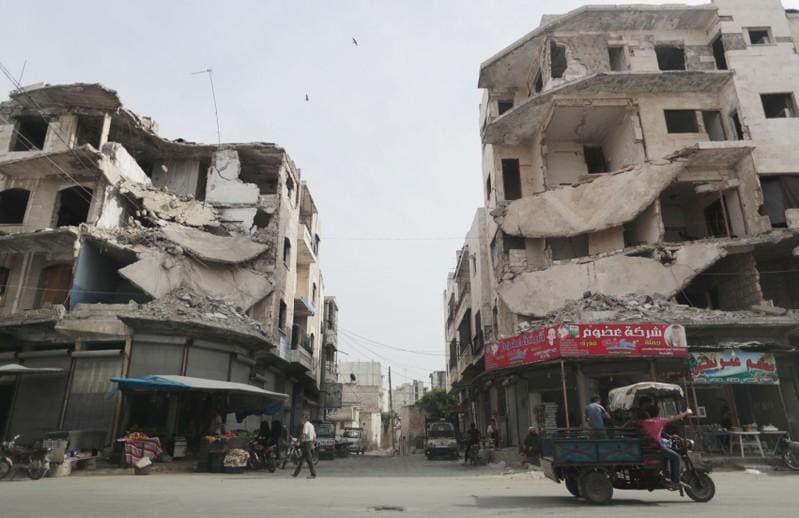 IDLIB CITY, Syria (Reuters) - Russian-backed Syrian government forces will be able to advance all the way to the Turkish border if they pierce rebel defences in the northwest, a top opposition official said, urging Turkey to do more to shield the area from a major attack.

The month-long onslaught is the most serious escalation of the war between President Bashar al-Assad and his enemies since last summer. Syrian government air strikes and barrel bombing backed by Russian air power have uprooted around 250,000 people in the territory, the last significant rebel stronghold.

Fawaz Hilal, head of the "Salvation Government" that runs Idlib province, expressed confidence that opposition fighters gathered in the Idlib region from all over Syria would be able resist the onslaught.

"This ferocious attack is a bone-breaking battle. If the regime is able to break our defensive lines in northern Hama and southern Idlib it will not stop until it reaches the borders," Hilal told Reuters in an interview.

His government, backed by the powerful Tahrir al-Sham jihadist group, had called on its employees to help shoulder the "military burden" through building sandbag defences, manning front lines, financial support or any other help.

"We are all concerned with repelling this attack," he said.

The bombardment has killed 229 civilians and injured 727 since April 28, according to The Union of Medical Care and Relief Organisations (UOSSM), a U.S.-based medical NGO.

Hilal spoke at his office in Idlib city, the provincial capital where life has continued as normal as the offensive has mostly targeted front-line areas to the south.

"We are optimistic despite this military campaign. If we weren't, we would not be here today," Hilal said.

The streets are busy with cars and pedestrians, and before sunset street vendors come out in large numbers to sell food to Muslims observing the daytime fasting for Ramadan.

Hilal noted Idlib's defences had been boosted by rebels forced from other parts of Syria such as Ghouta, Homs and Deraa when Assad took their towns and villages.

"Those lads have great combat doctrine," he said.

Tahrir al-Sham is the most powerful insurgent group in the region. It was formerly known as the Nusra Front, al Qaeda's Syrian wing, until it broke away and renamed itself in 2016. The United Nations designates it a terrorist group.

Other rebels taking part in the defence of the area include Turkey-backed groups. Senior opposition and rebel sources said on Saturday Turkey had sent fresh supplies of weaponry to these groups to help them repel the assault.

Turkey has been working with Russia for several years to de-escalate or contain Syria's conflict in the northwest. One of its aims is to avoid another refugee influx: Turkey already hosts 3.6 million Syrians.

But many of those recently displaced are sheltering at the border calling on Turkey to open the frontier.

Much of the recent shelling has hit an area that was declared a demilitarised "buffer zone" last year by Russia and Turkey. Under the agreement, heavy weapons and jihadists were supposed to leave the zone.

The Syrian government says it is responding to Nusra Front violations and attacks on government-held areas.

Turkey has a dozen military bases in the Idlib region, also established in agreement with Russia. One of these was hit earlier this month in shelling from Syrian government-held territory, with two Turkish soldiers wounded.

Hilal said the Turkish positions had been allowed to be established in the hope their presence would provide protection for the people. "But the reality says that these positions are not able to protect themselves today," he said.

"We hope that the Turkish side will ... defend these positions they set up and the areas they entered and prevent Russian and Syrian jets from flying in the areas where they are present, and the shelling of surrounding areas," he said.

"When these positions and the areas around them are shelled with Turkish soldiers wounded it raises a number of question marks," he said, adding that Ankara should clarify "their role and what they want from these positions."

(Writing by Tom Perry in Beirut; Editing by Mark Heinrich)