ADDIS ABABA (Reuters) - Trucks and excavators are going onto the site of the Ethiopian Airlines plane crash, causing concern that vital evidence may be lost or crushed, two diplomatic sources said on Friday. 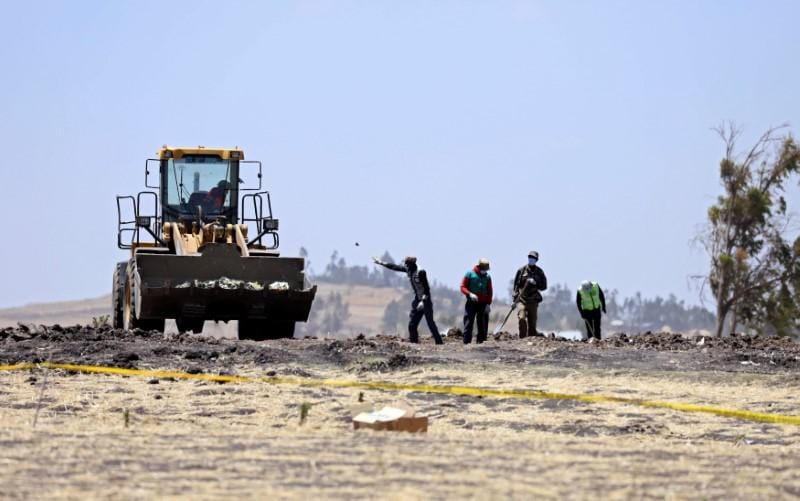 ADDIS ABABA (Reuters) - Trucks and excavators are going onto the site of the Ethiopian Airlines plane crash, causing concern that vital evidence may be lost or crushed, two diplomatic sources said on Friday.

Some policemen have also been taking selfies inside the yellow tape lines demarcating the scene, witnesses said.

The crash five days ago killed 157 people, brought a global suspension of Boeing 737 MAX aircraft and left a charred, debris-strewn crater in an Ethiopian field.

"The handling of the site is disastrous because they are letting trucks and excavators drive over it," an Addis Ababa-based diplomat, who has visited the site and is representing some families of victims, told Reuters.

"There are concerns especially about the use of excavators. People are wondering how you can use them for recovery in such a site," said another diplomatic source in Ethiopia who has visited the site multiple times this week.

US aviation officials briefed on the investigations told Reuters they were also concerned about the integrity of the crash scene and whether the debris has been properly safeguarded.

Flight 302 crashed minutes after take-off on Sunday, leaving a hole 10 meters (33 feet) deep. The impact and fire left the plane in small fragments and destroyed the bodies of any passengers, leaving only remains.

Ethiopian Airlines did not respond to requests for comment on the handling of the site, but has assured the world it will investigate as quickly and seriously as possible.

Reuters reporters at the scene have seen excavators scooping up dirt, personal effects and bits of metal from the plane.

The debris is mostly piled at one side of the field, while rescue workers have bagged and removed what they could find of human remains.

Since Sunday, Red Cross workers and investigators have been combing the site, while grieving families have gathered to mourn and villagers have stood beyond the yellow tape watching.

On Monday, Ethiopian police who came to take over guarding the site for the evening walked under the tape and across the site as it was still being cleared. Some took selfies on their mobile phones, according to Reuters witnesses.

The airline has sent the black boxes to Paris where French and U.S. experts have joined an Ethiopian-led investigation.

One airline industry source said Ethiopian government authorities had told him there were no current plans to do DNA identification. He also complained that authorities were excavating the crash site without proper procedure.