(Reuters) - A former Florida police officer was sentenced to 25 years in prison on Thursday for fatally shooting a black motorist who was awaiting a tow truck in October 2015. Nouman Raja, 41, was fired from the Palm Beach Gardens Police Department shortly after he killed Corey Jones, 31, while on plainclothes duty, and was convicted last month by a jury of manslaughter and first-degree murder. 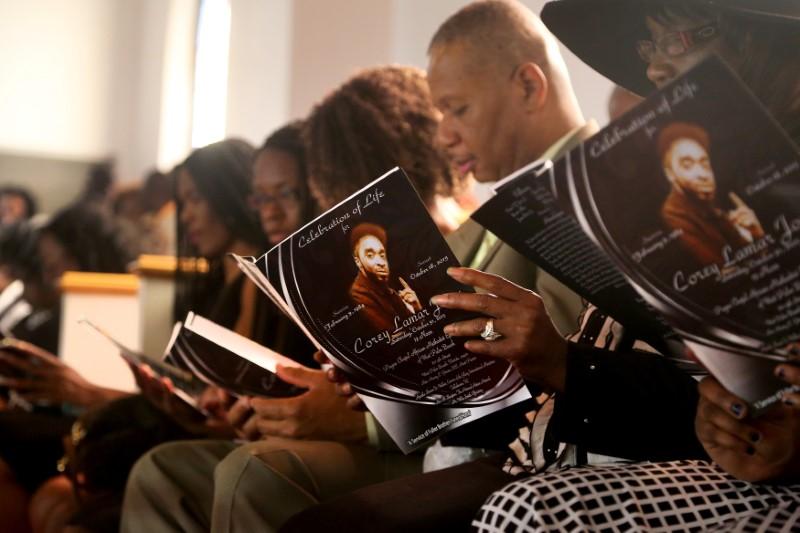 (Reuters) - A former Florida police officer was sentenced to 25 years in prison on Thursday for fatally shooting a black motorist who was awaiting a tow truck in October 2015.

Nouman Raja, 41, was fired from the Palm Beach Gardens Police Department shortly after he killed Corey Jones, 31, while on plainclothes duty, and was convicted last month by a jury of manslaughter and first-degree murder.

The conviction was unusual in a country in which police officers kill roughly 1,000 people each year, a disproportionate number of them black men, usually without facing prosecution, according to a Washington Post database on police shootings.

Jones' relatives asked Judge Joseph Marx to give Raja the maximum sentence of life in prison during the sentencing hearing. The judge said it was a "heartbreaking" case before handing down the sentence of 25 years, the minimum required under state law, for both counts, to run concurrently.

Police said Raja was in plainclothes and driving an unmarked van when he encountered a car he thought was abandoned on a West Palm Beach highway exit ramp on Oct. 18, 2015, a few hours before sunrise.

Jones was in the car, waiting for a tow truck. Prosecutors said Raja never identified himself as a police officer and that the officer acted aggressively in a way that likely led Jones to mistake him for a robber.

Police said Jones pulled out a handgun that he had legally purchased three days earlier before Raja fired at him six times within 13 seconds. Raja hit Jones three times and Jones died of a gunshot wound to his chest.

Raja's defence team has argued that their client feared for his life when Jones drew his gun.

Raja's wife and other relatives pleaded for leniency for what they said was a bad decision in a difficult moment doing a dangerous job. His lawyers condemned the notion that Raja, as a Muslim man of Asian descent, was motivated by racial prejudice.

Sheila Banks, Jones' godmother and aunt, called Jones a "gentle soul," and choked back tears as she pictured his dying moments.

"No one was there to hold his hand, to comfort him, to save his life," she told the court. "The person we trusted to serve and protect did not."

Raja appeared in prison overalls, his head bowed and his hands clasped during testimony from both his relatives and the victim's. His lip trembled with emotion as his wife described how he had sent three letters a day from prison, one each for her and their two children.

Raja's elder brother, who continues to work as a police officer, apologised to the Jones family and complained that Raja had been unfairly treated for what he called "a bad decision."

"Yes, it has something to do with race," Anand Raja told the court. "As proud American Muslims, we're not light enough, we're not dark enough."

Raja's lawyers have appealed to have the conviction overturned.

In a news conference after the sentencing, Benjamin Crump, a prominent civil rights attorney who represented Jones' family, listed a string of high-profile shootings of black men by police in recent years in which officers were not charged.

"Today we can tell many of those families that there's hope for America," Crump said, "because a jury in Palm Beach, Florida, looked at all the evidence and said a black man killed by the police can get equal justice."