By Yadarisa Shabong and Pushkala Aripaka (Reuters) - The former head of now-defunct political consulting firm Cambridge Analytica has been banned from running limited liability companies in Britain for seven years for letting staff offer 'unethical services', a state agency said. Alexander Nix was a director of the firm and five linked companies that had marketed themselves as offering clients 'bribery or honey trap stings' and 'voter disengagement campaigns,' the UK's Insolvency Service said on Thursday. Nix had accepted the disqualification, the Service said. 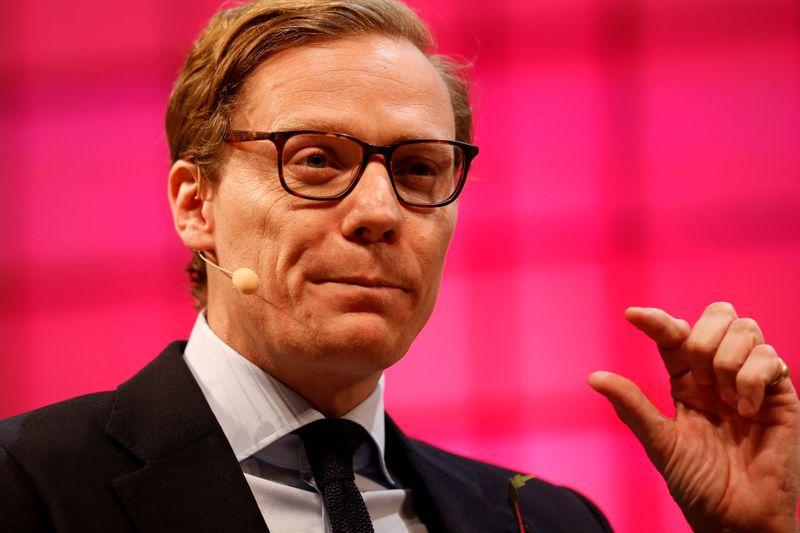 Alexander Nix was a director of the firm and five linked companies that had marketed themselves as offering clients "bribery or honey trap stings" and "voter disengagement campaigns," the UK's Insolvency Service said on Thursday.

Nix had accepted the disqualification, the Service said. Nix told Reuters he had not admitted any wrongdoing and had not been accused of breaking any laws, but had decided to bring the matter to a close to "avoid an unnecessary, lengthy and expensive court case".

Cambridge Analytica, which was hired by U.S. President Donald Trump's 2016 election campaign, closed down in 2018 following a scandal over its mining of Facebook Inc users' data. (https://reut.rs/2HuBuXl)

The firm said at the time it and its parent company SCL Elections ceased trading after suffering a sharp decline in business amid the bad publicity.

The British government's Insolvency Service said it had started an investigation into the directors' conduct after the companies went into compulsory liquidation.

"Our conclusions were clear that SCL Elections had repeatedly offered shady political services to potential clients over a number of years," Mark Bruce, the Insolvency Service's chief investigator, said in Thursday's statement.

The agency said it had found that Nix "had caused or permitted SCL Elections or associated companies to act with a lack of commercial probity".

It did not say whether the companies had ever performed any of those services for a client.

Nix, 45, was disqualified from acting as a director or becoming involved with a limited company without court permission from Oct. 5 onwards, and for a period of seven years, the service said.

Nix told Reuters: "In relation to my undertakings to the Secretary of State, I have made no admission of wrongdoing and importantly the Government did not seek to press that I had breached any laws."

The U.S. Federal Trade Commission ruled in December that Cambridge Analytica had deceived consumers about the collection of Facebook data for voter profiling and targeting.