Everyone is a victim of Mao, but no one dares to say it, says TV host in China, draws ire

Beijing: China's state broadcaster is investigating one of its hosts after a video of him insulting Mao Zedong was leaked online, causing a stir and rekindling debate on the complicated legacy of the father of communist China.

In the home video that circulated widely online before censors removed it this week, Bi sings a song about Communist Party-led soldiers battling bandits in northeastern China in the 1940s. To the laughter of guests at a dinner, Bi adds his own commentary in a speaking voice between lines. 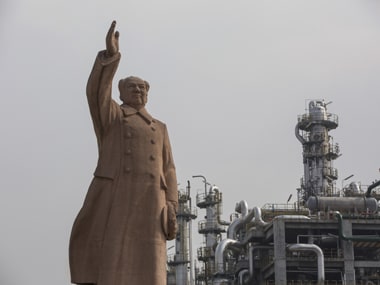 After the lyrics mention Mao, Bi refers to the revolutionary hero using a vulgar Chinese insult that includes a reference to female genitals, and says "he has ruined us all." Bi also mocks the soldiers, suggesting their battles were pointless and the song's claim of victory boastful.

The incident renewed debate both on free speech and about Mao, who many Chinese feel should be held responsible for disastrous periods such the 1959-1961 famine and the chaos unleashed by the decade-long Cultural Revolution in 1966 when Mao appealed directly to the masses to root out reactionaries.

Wang Cailiang, a Beijing lawyer, says the leaking of the private clip and its aftermath was worrisome. "When a dinner becomes a set-up, who can be free from fears?" Wang said.

Though some of Mao's policies have been officially critiqued, the ruling Communist Party can hardly renounce him because it has built much of its legitimacy upon the imagery surrounding the revolutionary leader. A huge portrait of him still hangs in the heart of Beijing.

A small but vocal slice of the population still worships Mao, while many Chinese pay lip service to him and his ideology. The cover from such pretense was blown off when Bi — a host for one of the key mouthpieces for the party's policies — made his apparently candid and irreverent remarks.

"Everyone is a victim of Mao, but no one dares to say it," said Zhang Lifan, a Beijing-based historian and independent commentator. "Yet in private settings, even those senior officials working for the system have no good word for him. This political system breeds duplicity and schizophrenia."

State-run newspapers have responded with harsh criticism of Bi, saying his comments — even if made privately — were improper for such a public figure.

"It's extremely unfitting of Bi's status that such lewd words to mock the people's leader and people's heroes should have come out of him — a Communist Party member and someone who has claimed to have served in the armed forces," wrote the state-run China Youth Daily in a Wednesday editorial.

The China Youth Daily chastised Bi for his lack of integrity. "You owe everyone in China an apology," the newspaper said in an editorial.

Bi also received some strong support online, with many people defending his right to speak his mind privately and condemning whoever leaked the video.

The anchor later apologized after the video of him insulting the founder of modern China went viral on social media sites.

While the ruling Communist Party has acknowledged Mao made mistakes, there has yet to be an official accounting for the chaos of the Cultural Revolution or the millions of deaths from starvation during the 1958-61 Great Leap Forward, Reuters report said.

In a brief statement released on its website late on Wednesday, CCTV said the remarks of its anchor Bi Fujian "had a serious social impact".

"We will seriously handle the matter in line with related regulations and based on careful investigation," it said without elaborating.

In a statement on his official microblog, Bi said he felt "extreme remorse and hurt" for the effect of his words.

"I sincerely offer my deep apologies to society. As a public figure, I will certainly learn a lesson."

However, the decision to investigate Bi has generated much anger on the Internet, with many people saying he should not be rebuked. On one Weibo poll, 80 percent of respondents said Bi should not apologize.

"Criticizing Mao in private is something that can still be hyped up? It's been done in public not only overseas but also in China," wrote prominent liberal economist Mao Yushi on his microblog.

The network is viewed by the government as an enormously influential and useful propaganda tool abroad, and at home where authorities keep a tight rein on domestic media.

Zha Jianguo, a dissident who has recounted some of the violence under Mao's reign, said Bi has done nothing wrong.

"To say a despot has ruined us all, how can that be an insult? How could that be irreverent?" Zha said.