Evacuation plan 'out the window' when fire hit California town

By Andrew Hay (Reuters) - When a 'megafire' engulfed Paradise, California, officials and residents had to abandon their evacuation plans and improvise new ways to save lives, learning lessons that could help the growing number of U.S. communities at risk to wildfires 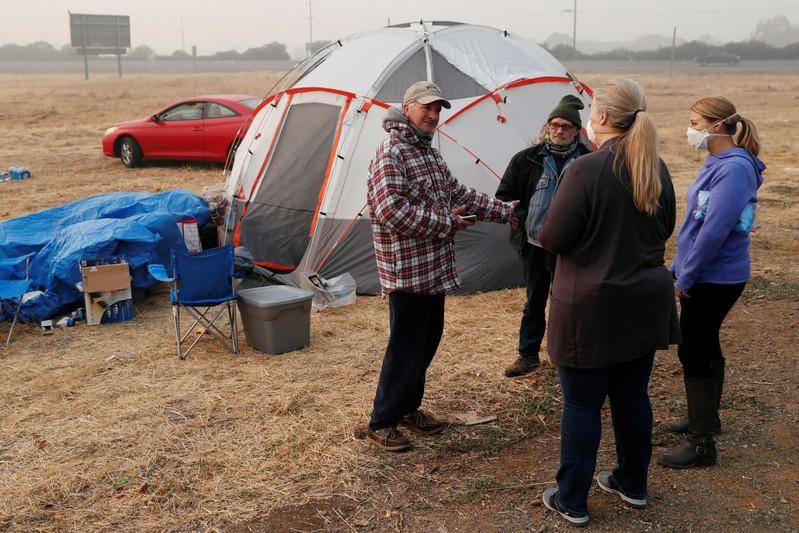 (Reuters) - When a "megafire" engulfed Paradise, California, officials and residents had to abandon their evacuation plans and improvise new ways to save lives, learning lessons that could help the growing number of U.S. communities at risk to wildfires.

As strong winds sent flames roaring into Paradise at 2 miles per minute, emergency personnel and locals realized their escape plans, crafted after a 2008 blaze, would not work.

"The lessons we had learned in the past kind of went out of the window due to the sheer speed and intensity of this fire," Paradise Emergency Operations Coordinator Jim Broshears said in a phone interview.

The small mountain town was facing the so-called Camp Fire, one of a series of recent "megafires" fueled by drought, erratic winds and overgrown forests that quickly torch over 100,000 acres.

A week after California's deadliest blaze, which killed at least 71 people, residents were critical of the town's alert system. Broshears said other towns could save lives if they taught residents to shelter from fire and got more of them to sign up for alerts.

As Paradise was engulfed around 8 a.m. on Nov. 8, officials attempted a staggered evacuation using their CodeRED alert system to target a zone at a time. They wanted to avoid the panic and chaos that ensued in 2008 as all 27,000 residents tried to flee at once.

With the fire toppling power lines and mobile towers, and residents jamming networks with calls, about 60 percent of CodeRED alerts were delivered, according to Troy Harper a spokesman for OnSolve, the company that provides the service.

Between 25 and 50 percent of residents had signed up for the optional system, Broshears said, meaning 30 percent of households, at best, got alerts.

As the town burned, officials abandoned the phased evacuation and told everyone to get out, Broshears said.

"We felt we morally couldn't do that and just had to go all out and hope for the best," said the former Paradise fire chief, who has lived in the town since 1974.

Locals like nurse Darrel Wilken said an old-fashioned siren system would have been better than CodeRED.

"People who are not connected to the internet or phone need to know there is a fire," said Wilken.

Paradise widened, paved and straightened roads after the 2008 blaze to allow for a speedier evacuation. But the Camp Fire burned across all escape routes.

The fire moved faster than anyone expected, throwing embers that reached 2 miles (3 km) ahead of the flames, Paradise Mayor Jody Jones said.

"I don't know that there's a city or town in the entire world that could evacuate their entire population all at the same time and not overwhelm their roadway structure," Jones told CNN in an interview on Saturday.

On the ground, residents fought to escape the town.

Wilken, 51, got word around 8 a.m. that the fire was 7 miles away. By 8:15 a.m. trees outside his window at the Feather River Hospital were on fire.

There was no time to gather ambulances to evacuate the 67 admitted patients as staff had trained to do.

"If your car was not on fire, you were the ambulance," said Wilken, who loaded three patients into his Subaru WRX.

His designated escape route was blocked by flames. He wove through back streets and a slalom of burning vehicles, his car exterior melting from the heat, trees and electricity poles falling on vehicles ahead, before reaching safety hours later.

As Wilken fled, firefighters and volunteers including resident Mike Boggs tried to get into town. Police had turned all exit routes into contraflows, a move that sped up the evacuation, but obstructed first responders trying to enter Paradise. Boggs went off road and drove up a ditch in his pickup, followed by a fire truck.

The 60-year-old iron worker credits a decision after the 2008 blaze with saving his and nearby homes in Butte Valley, near Paradise. He bought 40 cattle that grazed on grass that would have otherwise fed the fire.

"Everywhere I put my cows it didn't burn," said Boggs.

For Broshears, one of the biggest lesson from the Camp Fire was that residents facing a megafire might sometimes be better off sheltering in open spaces, like road intersections, than trying to outrun flames.

"It would be ugly but you'd survive," he said.