By Gabriela Baczynska BRUSSELS (Reuters) - European Council President Donald Tusk said the EU-UK divorce deal was not up for renegotiation after Britain's parliament on Tuesday voted to replace the Irish 'backstop' border arrangement contained in it with unspecified 'alternative arrangements'. 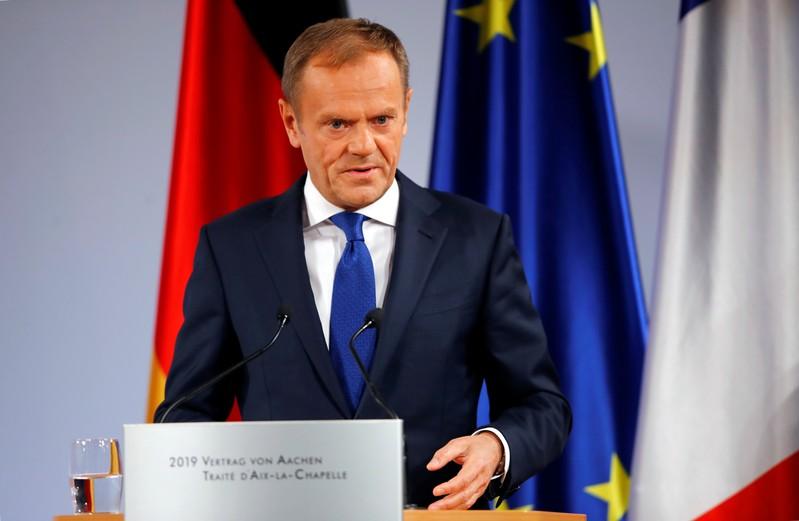 BRUSSELS (Reuters) - European Council President Donald Tusk said the EU-UK divorce deal was not up for renegotiation after Britain's parliament on Tuesday voted to replace the Irish "backstop" border arrangement contained in it with unspecified "alternative arrangements".

The backstop is aimed at keeping an open border between EU-member Ireland and British-ruled Northern Ireland after Brexit but is strongly opposed by many in Prime Minister Theresa May's Conservative Party, who say it risks trapping the United Kingdom in a permanent customs union with the European Union.

"The Withdrawal Agreement is and remains the best and only way to ensure an orderly withdrawal of the United Kingdom from the European Union," Tusk said via his spokesman.

The House of Commons also backed on Tuesday a non-binding amendment to rule out a damaging no-deal Brexit.

"We welcome and share the UK parliament's ambition to avoid a no-deal scenario. We continue to urge the UK government to clarify its intentions with respect to its next steps as soon as possible," Tusk said on behalf of the 27 EU states remaining in the bloc after Brexit.

"If the UK's intentions for the future partnership were to evolve, the EU would be prepared to reconsider its offer and adjust the content and the level of ambition of the political declaration... Should there be a UK reasoned request for an extension, the EU27 would stand ready to consider it and decide by unanimity."

Britain is due to leave the EU on March 29.

Tusk added that the EU would press on with contingency preparations as well as the ratification of the existing Withdrawal Agreement that has stalled on the UK side.

His comments were echoed by Guy Verhofstadt, the Brexit pointman of the European Parliament, which must also sign off on the Brexit deal.

"We stand by Ireland," he said. "There is no majority to re-open or dilute the Withdrawal Agreement in the European Parliament, including the backstop."

While the EU says it is open to "alternative arrangements", no workable options were found in two years of negotiations between Britain and the bloc.

One EU diplomat involved in Brexit talks laid out how they thought things would go until March 29, when Britain is due to leave the bloc.

"PM May will now come back to Brussels and be rebuffed. The House of Commons will have to vote again mid-February on Plan C. And it will have to be Plan A all over again but with even more pressure of no-deal Brexit looming."

Another diplomat agreed that Brexit would "go right down to the wire."

Diplomats and officials in Brussels speculated May could return as soon as later this week to demand changes to the deal she had agreed with the bloc in November, but which the British parliament rejected overwhelmingly in a vote on Jan. 15.