By Alicja Ptak, Emilio Parodi and Francois Murphy WARSAW/MILAN/VIENNA (Reuters) - A surge in demand for vaccines to ward off the winter flu has led to shortages in some European cities, raising the risk of a potentially lethal 'twindemic' as COVID-19 cases soar. 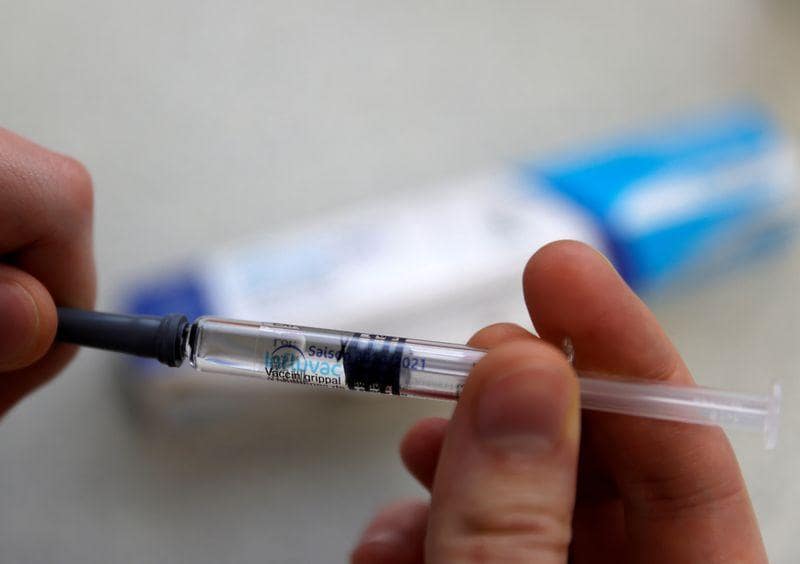 WARSAW/MILAN/VIENNA (Reuters) - A surge in demand for vaccines to ward off the winter flu has led to shortages in some European cities, raising the risk of a potentially lethal "twindemic" as COVID-19 cases soar.

Many governments boosted vaccine orders this year and launched campaigns to encourage citizens to get shots.

The aim was to inoculate earlier than usual and cover a bigger portion of the continent's 450 million population to reduce the burden on health services.

Top manufacturers such as GlaxoSmithKline, Sanofi, Abbott and Seqirus have boosted supplies to the region by an average of 30% in anticipation of higher demand. But they are operating at full capacity and cannot meet all the late extra demand, Vaccines Europe, which represents the producers, said in a statement on Wednesday.

Interviews with at least 10 city and government officials, as well as medical experts, also show systems in major cities such as Warsaw are struggling with the strong early demand, causing delays and temporary shortages.

"This year, patients come all the time and ask about vaccines, more than 10 people every day," said Grazyna Lenkowska-Mielniczuk, manager at Apteka Non Stop pharmacy in Warsaw's Wola district.

"The wholesalers tell us the same thing as we tell patients: that there are no vaccines and we have to wait."

Europe's flu season begins in October and infections typically pick up between mid-November and the start of December, according to data from the European Centre for Disease Prevention and Control.

Seasonal flu viruses cause between 4 million and 50 million infections each year and up to 70,000 Europeans die each year of causes linked to flu, particularly among older adults and at-risk groups.

There was "very limited" flu transmission in the southern hemisphere this year for that reason, Sylvie Briand, director of Global Infectious Hazard Preparedness at the World Health Organization said in a briefing last week.

Even so, surging coronavirus infections across the continent prompted EU Health Commissioner Stella Kyriakides to warn last month of the risk of a "twindemic of COVID-19 and the flu".

Medical experts are urging more people get inoculated to prevent a deeper crisis.

"There is a need to prevent a double wave of influenza plus COVID-19," said Clemens Wendtner, chief physician of infectiology and tropical medicine at the Munich Schwabing Clinic, who recommends people younger than 60 get the jab this year.

Poland's Ministry of Health said it bought 3 million doses this year and will buy more if needed - as of Tuesday it had received 1.6 million shots.

But Mylan's Influvac Tetra and Sanofi's Vaxigrip Tetra vaccines are available in only 1% of pharmacies in Poland, according to gdziepolek.pl, a Polish website that helps patients find the nearest pharmacy with a drug they are seeking.

GSK's Fluarix Tetra is not available and AstraZeneca's Fluenz Tetra is available in 5% of pharmacies, the website showed.

A spokeswoman for Mylan said that the company was able to meet supply commitments in Poland and was monitoring supply levels. An AstraZeneca spokesman said the company was not aware of supply issues.

The disruption is being felt elsewhere in Europe.

In Belgium, one-third of ordered vaccines have not yet been delivered and some will arrive later than usual, according to the country's drugs agency. The government has booked nearly 3 million vaccines this year, 10% more than last year.

In Klagenfurt, a southern Austrian city of 100,000, authorities said in a statement they had made their usual order for vaccines in January, and tried unsuccessfully to increase their quota as the pandemic hit.

"There is already a severe shortage of influenza vaccines throughout Austria and there is an acute need for action," said city councillor Franz Petritz.

The Austrian government ordered 1.25 million shots for its population of almost 9 million, 60% more than last year, the Ministry of Social Affairs said.

Doses only started arriving in mid- to-late September and are taking time to reach vaccination centres around the country, it said, adding it was unclear if more would be needed.

Given the long lead times needed for flu vaccines to be produced, manufacturers made all possible efforts to increase production in the exceptional circumstances, Vaccines Europe said. But capacity to make more now is limited.

Allocation of doses to countries typically takes place a year or more ahead of a flu season and production for the northern hemisphere starts in early March.

The company is looking to produce and distribute more for 2020 and the coming years, but demand is expected to continue to outpace manufacturing capacity, she said.

Sanofi and AstraZeneca are delivering record volumes and have made extra supply available, spokespeople for the drug makers said.

Demand for flu vaccine doses in Italy increased by more than 40% from last year to 17 million, said Massimo Scaccabarozzi, president of the Italian pharmaceutical companies' association.

But some local authorities only started ordering supplies this month.

"We have already reached the limit of our industrial possibilities," said Scaccabarozzi. "I do not know if and how much it will be possible to further increase the quantity if there were further requests."

(Reporting by Alicja Ptak in Warsaw, Emilio Parodi in Milan, Francois Murphy in Vienna, Ludwig Burger in Frankfurt and Julie Steenhuysen in Chicago; Additional reporting by Francesco Guarascio in Brussels, Caroline Copley in Berlin, Alistair Smout in London and Stephanie Nebehay in Geneva; Writing by Josephine Mason in London; Editing by Alex Richardson)