By Robin Emmott and Gabriela Baczynska STRASBOURG/BRUSSELS (Reuters) - The European Union warned on Wednesday that Britain was headed for a damaging no-deal Brexit, with London's ideas for solving the contentious issue of the Irish border still unlikely to unlock a deal just six weeks before Britain is due to leave. Addressing EU lawmakers in Strasbourg, European Commission President Jean-Claude Juncker said British Prime Minister Boris Johnson had told him on Monday that London still wanted a deal, but would leave with or without one on Oct. 31. 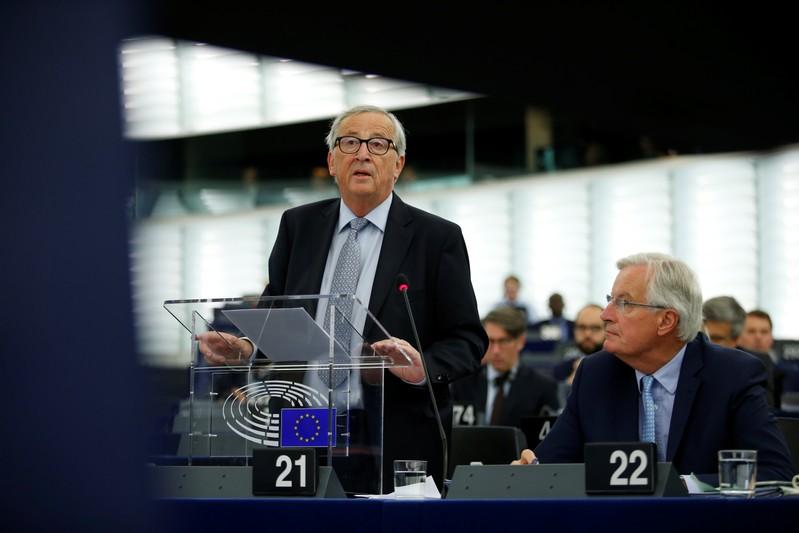 By Robin Emmott and Gabriela Baczynska

STRASBOURG/BRUSSELS (Reuters) - The European Union warned on Wednesday that Britain was headed for a damaging no-deal Brexit, with London's ideas for solving the contentious issue of the Irish border still unlikely to unlock a deal just six weeks before Britain is due to leave.

Addressing EU lawmakers in Strasbourg, European Commission President Jean-Claude Juncker said British Prime Minister Boris Johnson had told him on Monday that London still wanted a deal, but would leave with or without one on Oct. 31.

"There is very little time left ... The risk of a no-deal is very real," said Juncker, his comments weighing on sterling.

Pro-Brexit lawmakers cheered and applauded in the Strasbourg chamber.

A majority of EU lawmakers later voted for an extension to Britain's scheduled departure date in a resolution that is not binding but which has political weight.

EU leaders will meet for a make-or-break summit in Brussels on Oct. 17-18, just a fortnight before Brexit is due to materialise more than three years after Britons voted to leave.

Britain is not likely to present a complete set of detailed, written proposals of how it would want the text of the existing - but stalled - Brexit deal changed before the end of the month, UK and EU sources said.

"If that is the case, the summit will end with nothing," an EU diplomat dealing with Brexit in Brussels said. "If there is to be a deal, it must be prepared to a large extent in advance. It is too technical to leave to the leaders at the last minute."

In a worst-case scenario, a no-deal Brexit could mean severe disruption to trade, supplies of medicines, fresh foods and possible public disorder, according to the British government's contingency plans.

Such a sharp break in economic ties, ending four decades of EU membership, "might be the United Kingdom's choice, but never the choice of the EU," Juncker said, highlighting how the bloc wants to avoid blame if Britain crashes out.

Juncker said London must present realistic proposals to replace the Irish backstop arrangement in the Britain-EU divorce agreement, which former premier Theresa May agreed with EU leaders but which was rejected by the British parliament.

"I am not emotionally attached to the Irish backstop," Juncker said. "I have asked the prime minister to make, in writing, alternatives," he said, calling it a safety net to avoid a divided Ireland after Brexit.

The backstop would require Britain to obey some EU rules if no other way could be found to keep the land border between British-ruled Northern Ireland and EU member Ireland invisible.

Johnson's office said in a statement late on Wednesday that the British leader had spoken with Juncker and the president of the European Parliament to reassure them that work was underway to find an alternative to the backstop.

"The Prime Minister and President Juncker discussed the positive and constructive conversation they had in Luxembourg on Monday and their shared determination to reach a deal," a spokesperson for Johnson said.

But Juncker's pessimistic tone on Wednesday was echoed by Finland's minister for European affairs, Tytti Tuppurainen, who told the parliament that a no-deal Brexit "is a quite likely outcome." Finland holds the EU's rotating presidency.

However, many EU lawmakers warned against a no-deal, both to avoid an economic shock and because they do not want to see Britain abandon its commitments to EU social and environmental standards and become a low-tax, low-regulation rival.

"We will not accept a Singapore on the North Sea," said former Belgian prime minister Guy Verhofstadt, a liberal EU lawmaker and a member of the parliament's Brexit committee.

In an at times bad-tempered debate underscoring general weariness on the tortured issue of Britain's pending departure, senior EU lawmakers took jabs at the noisy contingent of British eurosceptic deputies in the chamber.

Manfred Weber, leader of the centre-right EPP group, called Brexit "stupid". He and Verhofstadt took aim at British plans for greater sovereignty at a time when the parliament in Westminster has been suspended by Johnson. British pro-EU deputy Julie Ward called the prime minister "disreputable".

"Brexiteers claimed Westminster would take back control, but now they shut it down," Weber, a German lawmaker, said in Strasbourg, as the Supreme Court in London continued hearing arguments on whether Johnson acted unlawfully in suspending the parliament in the run-up to Brexit.

The European Parliament formally called on Wednesday for Britain to be granted another extension to allow more time for London to agree the terms of its withdrawal. The resolution passed with 544 in favour, 126 against and 38 abstentions.

Britain's departure has already been delayed twice since March and Johnson has vowed he would not seek another extension.

The EU's chief negotiator, Michel Barnier, said a no-deal Brexit would not resolve any of the issues around the rights of EU citizens, the Irish border and British obligations under the bloc's long-term budget.

"If the United Kingdom leaves without a deal, all these questions will not disappear. They are still there," Barnier told the EU chamber. "Some three years after the Brexit referendum we should not be pretending to negotiate."