By Gabriela Baczynska and Bart Biesemans BRUSSELS/LONDON (Reuters) - The European Union is giving a 'final push' in a bid to strike a Brexit trade deal with Britain, the bloc's chief negotiator said on Tuesday. Britain is set to complete its departure from the EU when it leaves the bloc's single market and customs union on Dec. 31, meaning its current free trade arrangements expire. 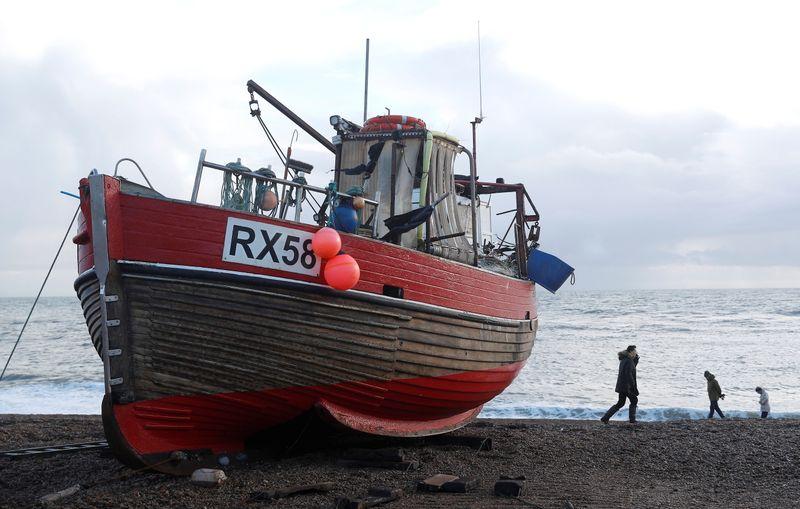 By Gabriela Baczynska and Bart Biesemans

BRUSSELS/LONDON (Reuters) - The European Union is giving a "final push" in a bid to strike a Brexit trade deal with Britain, the bloc's chief negotiator said on Tuesday.

Britain is set to complete its departure from the EU when it leaves the bloc's single market and customs union on Dec. 31, meaning its current free trade arrangements expire.

The two sides have for months been struggling to seal a new framework for their relations, going beyond trade to transport to energy. But the much-postponed final stages now coincide with a cross-Channel crisis as EU and other countries suspend most travel to and from Britain to try to curb a much more contagious variant of the coronavirus.

"We are really in a crucial moment. We are giving it a final push," said the negotiator, Michel Barnier as he arrived to update the bloc's 27 national envoys on Brexit.

Barnier told the closed-door gathering that fisheries remained a stumbling block and that the UK's latest offer on sharing out the catch from 2021 was "totally unacceptable", according to an EU diplomat who spoke on condition of anonymity.

"Barnier is walking a tightrope between London and Paris," said another EU diplomat, a reference to the small but politically prominent fishing community in northern France that would be affected by any reduction of EU catch.

EU officials and diplomats said the EU could be willing to cutting the value of its fish catch in British waters by around 25% from 2021.

But the sources said that was only one piece of the puzzle. The length of the transition on fishing rights beyond Dec. 31, as well as how the EU could retaliate if London cut its vessels out of British waters afterwards, were equally important.

Earlier in the day, EU diplomats and officials said an agreement was getting closer but also warned it might not come together in time to come into force on Jan. 1.

The UK's offer to gradually curb EU access over three years was also deemed too short for the bloc, which wants a longer-term business perspective for its fishing industry. London has said the bloc's proposal of six years is too long.

Prime Minister Boris Johnson, who campaigned for Brexit in a 2016 referendum, arguing that it would restore Britain's sovereignty, has repeatedly said it must control its waters and who fishes there.

London has hence seen the EU's effort to enshrine trade retaliation in their agreement in the event of losing access to UK waters as excessive, a disagreement that has also played out prominently in another area of trade talks related to ensuring corporate fair play on production standards and state aid.

European Commission President Ursula von der Leyen and Johnson spoke on Brexit, as well as the coronavirus, in a phone call on Monday, according to EU sources. More calls would come as needed, they said.

Britain, the world's sixth biggest economy, left the EU, a trade bloc of 450 million consumers, last January. Around $900 million in annual trade is at risk if they fail to craft a new accord by the end of this year.

A senior British minister on Tuesday ruled out prolonging Britain's transition out of the EU beyond Dec. 31.