EU to consider making good on sanctions threat against Turkey

By Robin Emmott BRUSSELS (Reuters) - EU foreign ministers will evaluate grounds for sanctions against Turkey over a Mediterranean gas dispute on Monday before the bloc's leaders decide whether to make good on their threat to impose punitive measures. 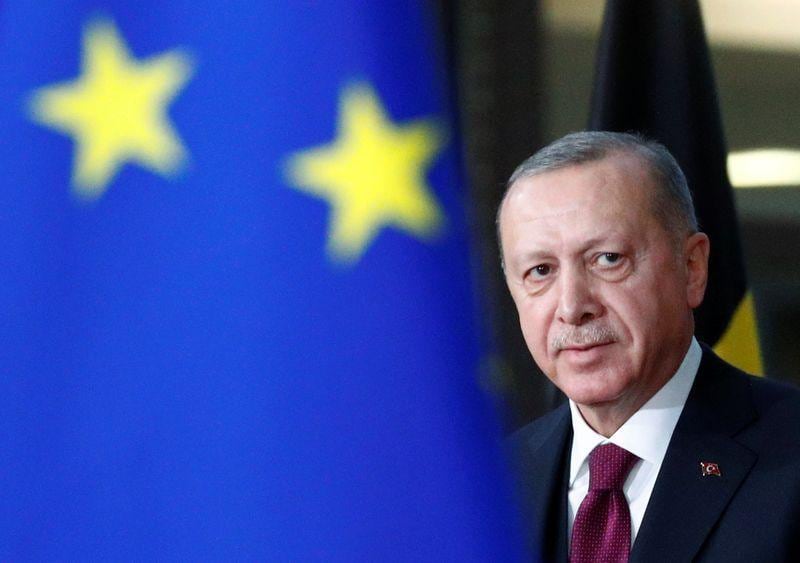 BRUSSELS (Reuters) - EU foreign ministers will evaluate grounds for sanctions against Turkey over a Mediterranean gas dispute on Monday before the bloc's leaders decide whether to make good on their threat to impose punitive measures.

Ministers will not take decisions at their meeting on Monday, leaving that to Thursday's summit of EU leaders, who in October told Turkey to stop exploring in disputed waters in the eastern Mediterranean or face consequences.

Turkey's move in late November to return a seismic exploration vessel to port has calmed tension, but EU officials and diplomats said broader issues - over Libya, Syria, Russia and authoritarianism in Turkey - have hardened EU positions.

"I'm not aware of any EU government challenging the view that the situation is worse than October and that leaders should consider the consequences," said a senior EU official. "We have been requesting a change that has not come."

The European Union says Turkish drill and survey ships have continued to work in waters contested by Greece and Cyprus, which Greece says makes formal talks with Turkey over maritime claims impossible.

Germany, current holder of the EU's six-month presidency, holds the key to whether sanctions go ahead. It had hoped to mediate between Athens and Ankara, but was angered when Turkey resumed exploration for gas off Cyprus in October after a pause.

"Putting the (Oruc Reis) exploration ship back to sea straight after the (October) summit was not taken kindly by member states that put a lot of effort in with Turkey and Greece. There are limits even to German patience," said a EU diplomat familiar with the preparations for the summit.

France and the European Parliament say it is time to punish Turkey, a NATO ally and candidate to join the EU that is seen in Brussels as fuelling the gas dispute for domestic politics.

Turkey rejects EU talk of sanctions, saying it is not constructive.

The EU parliament called for sanctions on Nov. 26, but the return of the Oruc Reis to port and Turkish President Tayyip Erdogan's call for dialogue may give the EU reasons to hold off for now.

"Sanctions are on the table, but they're not automatic," the EU diplomat said.