By Alastair Macdonald and Gabriela Baczynska BRUSSELS/LUXEMBOURG (Reuters) - European Union leaders will give British Prime Minister Theresa May a tough reception in Brussels on Wednesday, warning her to rally support at home for the Brexit deal on offer or be cut loose without one in March. May will address the other 27 EU national leaders at a summit before they sit down to dinner without her. 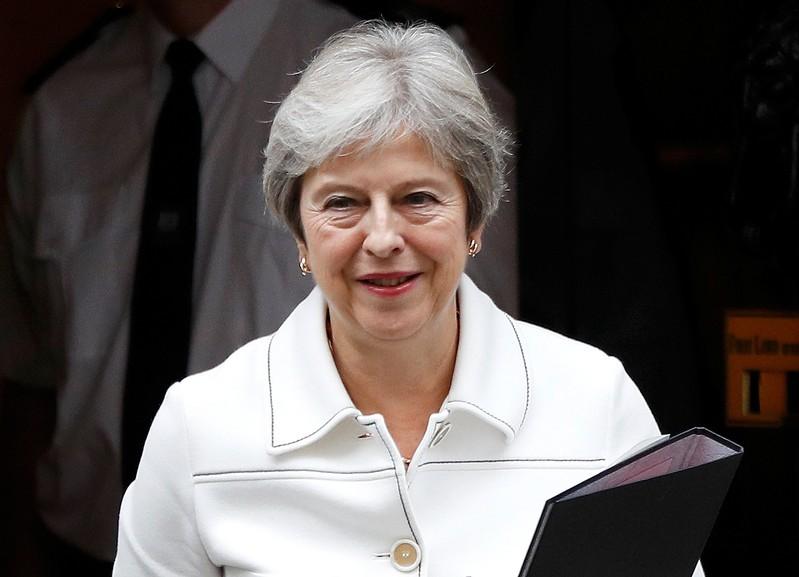 BRUSSELS/LUXEMBOURG (Reuters) - European Union leaders will give British Prime Minister Theresa May a tough reception in Brussels on Wednesday, warning her to rally support at home for the Brexit deal on offer or be cut loose without one in March.

May will address the other 27 EU national leaders at a summit before they sit down to dinner without her. Officials said they expected the leaders to tell May they have little more to offer since talks stalled on Sunday and they will step up preparations for Britain to drop out of the bloc with no deal.

Summit chair Donald Tusk warned that the risk of a "no deal" dumping Britain out of the bloc and into legal limbo and border chaos on March 29 was greater than ever. He put the onus on May to bring a "creative" solution to break the impasse over the EU-UK land border on the island of Ireland.

Tusk called it a "Gordian Knot", making clear he did not see May as a contemporary "Alexander the Great", capable of slicing through the tangle of opposition she faces in London and Belfast over her Brexit plan in order to clinch a treaty with the EU.

The "no deal" message is sincere enough. It is also a tactic to pressure a negotiating partner the EU views as weak. And it might just help May by giving her the kind of political theatre useful in persuading Britons she has fought for the best deal.

More subtly, leaders may also sound relaxed on the calendar for talks. On Tuesday, officials echoed the mantra that "the clock is ticking" to agree a treaty that parliaments can ratify in time for Brexit. But, sensing more urgency in London, senior EU officials said Brussels would "keep calm and carry on", ready to wait till December or even later to clinch a final agreement.

"For now, Britain is negotiating with Britain," Belgian Foreign Minister Didier Reynders said, referring to May's troubles with her own cabinet and supporters. "We need more weeks to see if we can get a deal. We'll work calmly."

Germany's Europe minister called on May to "take responsibility and be constructive". But some diplomats believe May could be unable to move again in negotiations until after she has steered her budget through parliament in early November.

Citing a German government document, the Frankfurter Allgemeine Zeitung newspaper reported late on Tuesday that the European Commission had offered to allow Britain - "in a good will gesture" - to remain in the EU customs union and internal market beyond an agreed transitional arrangement until the end of December 2020.

PREPARATIONS FOR NO DEAL

Leaders will decide at dinner after May has left them on Wednesday whether to firm up a tentative plan to hold a special Brexit summit in mid-November. But Tusk said they would need to believe that a deal was nearly done -- and without some new move from May in Brussels, that belief seems unlikely to come this week.

"There needs to be a much clearer, sharper messaging on the choice the UK faces," one senior diplomat told fellow national envoys after talks broke down on Sunday. The EU had gone as far as it could to address May's difficulties with her hardline pro-Brexit and Northern Irish allies, he said -- now the summit must not let May think things were just carrying on as normal.

Quite how tough the EU message is to May after Wednesday's dinner will depend on her approach, diplomats said. If she brings to Brussels the uncompromising tone they heard a month ago in Salzburg, when name-calling on both sides hit a low, then the EU warnings of impending calamity will step up a notch.

EU chief executive Jean-Claude Juncker will tell leaders after May has spoken on Wednesday evening about his European Commission's plans for a "no deal". Officials say that will include how to rush through emergency EU legislation to cope with huge disruption to transport and trade links.

The Commission had planned to release its proposals last week but held off, officials said, because Brexit negotiators did not want to sour what was an increasingly positive mood in talks behind the scenes. The brick wall those talks hit over the Irish border issue has flipped around that logic.

Some EU leaders, notably President Emmanuel Macron of France which faces questions over intensive cross-Channel trade and traffic, want much more public clarity to show that the bloc could cope with cutting Britain out of EU regulations.