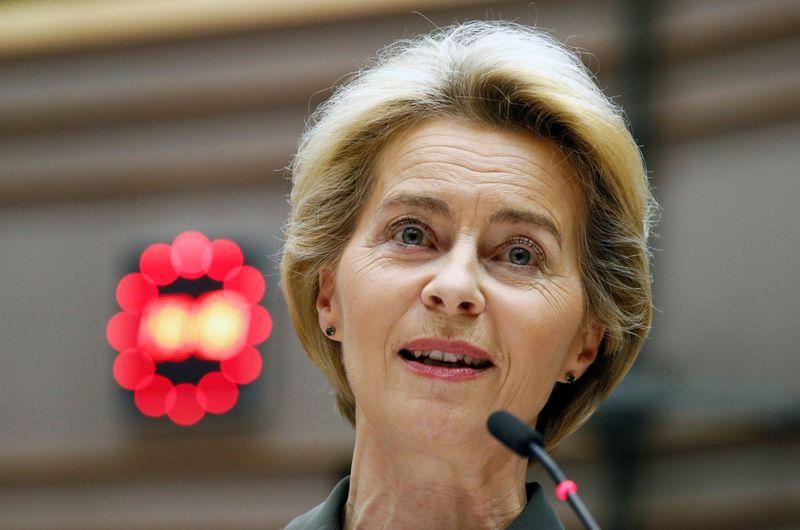 By Francesco Guarascio and Phil Blenkinsop

BRUSSELS (Reuters) - European Union leaders on Thursday will push to agree to make their bloc climate neutral by 2050, luring reluctant eastern member states with promises of extra money for their heavily-polluting economies.

The bloc's 27 national leaders will meet in Brussels from 1400 GMT, a day after the bloc's executive proposed a Green Deal to mobilise 100 billion euros worth of investment to help the bloc's economies move away from fossil fuels.

With floods, fires and droughts wrecking millions of lives around the world, the EU's new executive cast the plan as the bloc's "man on the moon moment," kindling hopes among campaigners that other big emitters may follow suit.

But coal-reliant Poland, Hungary and the Czech Republic were not on board, saying a draft decision must spell out in more detail the scale and scope of financing available, and pushing to include nuclear in the EU's fresh push to cut emissions.

Underlining divisions in the bloc on climate, EU national diplomats in Brussels on Wednesday blocked a set of new rules governing which financial products can be called "green" and "sustainable".

"It's going to be very difficult," said a second senior EU diplomat, from a country more reluctant to do more to fight climate change, about chances for agreement at the summit.

The climate discussion feeds into another difficult one the leaders will have, namely on their next long-term budget.

No agreement is expected on that after a proposal by the bloc's current president Finland to cap joint spending at 1.087 trillion euros for 2021-27 was rejected by both the frugal camp and those seeking heavier outlay. The leaders might agree, however, to hold a summit next February to seal a deal.

"We're getting near the time when we have to sit in the sauna and sweat it out," said another senior EU diplomat.

Over dinner on Thursday, the leaders are also expected to support extending for six months from February the bloc's economic sanctions on Russia over its annexation of Crimea from Ukraine and support for rebels in the east of the country.

The summit will be notable for the absence of British prime minister Boris Johnson, staying at home for a national election he is fighting on a promise to get Brexit done.

After partial results come in through the night, the 27 other leaders will meet again on Friday to discuss Brexit.

Should Johnson's Conservatives win a parliamentary majority, the 27 will reaffirm their support for a divorce deal that would take Britain out of the bloc at the end of January.

They will state their aim for "as close as possible" future ties with Britain and embark on preparations for trade talks "based on a balance of rights and obligations" to "ensure a level playing field", according to their latest draft decision.

Eyes will be on two more leaders at the Brussels talks: Finland's new Prime Minister Sanna Marin - the world's youngest at 34 - and Malta's Joseph Muscat, who will be stepping down amid a crisis over the murder of journalist Daphne Caruana Galizia.