Ethiopia's Sidama vote on autonomy in test of nationalist passions 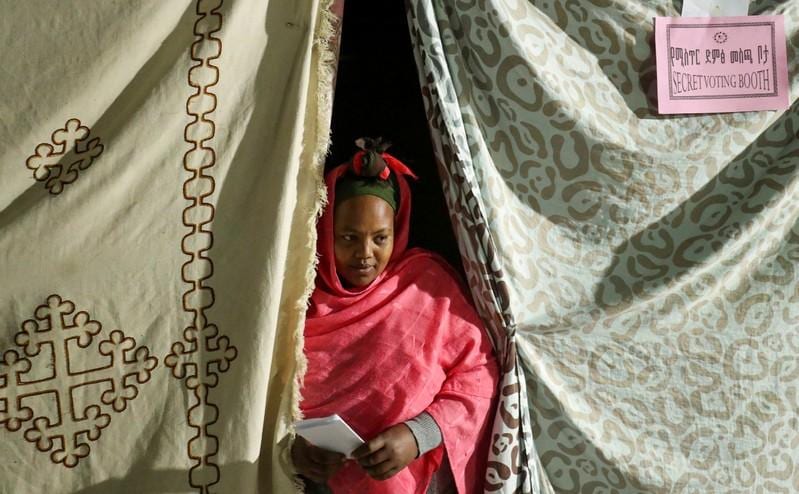 HAWASSA, Ethiopia (Reuters) - Members of Ethiopia's Sidama minority lined up before dawn to vote in a self-determination referendum on Wednesday, a test of Ethiopia's ability to peacefully manage ethnic demands and political change after more than a year of sweeping reform.

Sidama voters described the referendum as the achievement of a lifetime and culmination of decades of struggle for autonomy.

"I consider witnessing this day as if I were born again," said Yerusalem Kawiso, 48, who stood in a queue in Hawassa, the lakeside provincial city the Sidama hope to make their capital, waiting to vote in a pink dressing gown.

"We lived our whole life under oppression. As a child I remember chopped heads of Sidama people displayed at the market. I will never forget the head of my brother in law," she said.

Ethiopia's constitution grants the right to seek autonomy to its more than 80 ethnic groups. More than a dozen groups are debating whether to demand such powers, amid reforms to create a more open society under Prime Minister Abiy Ahmed, who took office last year and won the Nobel Peace Prize last month.

Shortly after polls opened, the prime minister tweeted: "The Sidama referendum is an expression of the democratization path Ethiopia has set out on. As citizens go out to vote today, I call upon all to engage peacefully throughout the process."

The vote would carve an autonomous region for the Sidama, who comprise about 4% of Ethiopia's 105 million people, out of the Southern Nations, Nationalities and Peoples region, the most ethnically diverse part of Ethiopia. Other groups who share the region now are wary of disenfranchisement or violence.

At least 17 people died in clashes in July between security forces and Sidama activists after the government delayed the poll by five months. [L8N24L09S]

At a polling station in the Hiteta neighbourhood in Hawassa, women carried babies to vote. Elders queued up wrapped in white, handwoven blankets called gabis, and young men wore traditional Sidama scarves tied around their heads.

Many waved their voting cards in celebration as they waited to cast their ballots when polling stations opened at 6 a.m. (0300 GMT).

"I arrived early to vote as I want my own region," said Emnet Telahun, 22, holding her one-year-old daughter Mirtinesh.

If the referendum passes as expected, the Sidama will control local taxes, education, security and laws in what would become Ethiopia's tenth region.

Since Abiy took office in one of Africa's most tightly controlled states, changes have brought a more open society and a weaker ruling coalition, emboldening politicians advocating for more rights for their ethnic groups.

The 43-year-old prime minister has also moved to open up one of Africa's fastest growing economies, and to make peace with neighbouring Eritrea.

However, the openness has also brought a surge of long-repressed rivalries between ethnic groups, forcing more than 2 million people out of their homes and killing hundreds, according to the United Nations and monitoring groups.

Dukale Lamiso, head of the Sidama Liberation Front, an activist group, said if the voting were unfair or the referendum should fail to bring autonomy, "that would be a danger for Ethiopia itself because of course there will be violence."

About 2.3 million voters are registered at nearly 1,700 polling stations, the national electoral board said. Polling stations close at 6 p.m. (1500 GMT). Preliminary results are due on Thursday.

The vote will also be closely watched for its tone in the run-up to a general election next year, which Abiy has promised will be free and fair. Previous elections going back to 2005 were marred by irregularities and violence.