By Gustavo Palencia and Sofia Menchu TEGUCIGALPA/GUATEMALA CITY (Reuters) - The remnants of Hurricane Eta unleashed torrential rains and catastrophic flooding on Central America, with fatalities sharply up on Thursday as streets turned into rivers and dozens more were feared to be buried in their homes by mudslides. 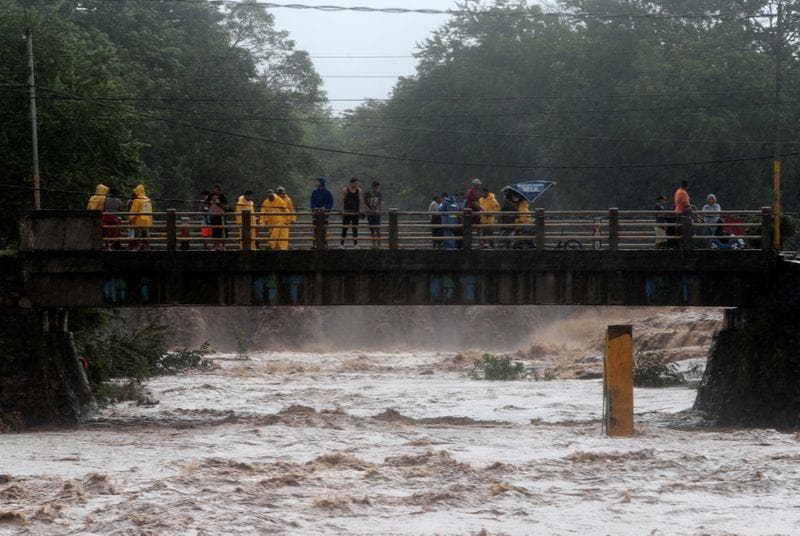 By Gustavo Palencia and Sofia Menchu

TEGUCIGALPA/GUATEMALA CITY (Reuters) - The remnants of Hurricane Eta unleashed torrential rains and catastrophic flooding on Central America, with fatalities sharply up on Thursday as streets turned into rivers and dozens more were feared to be buried in their homes by mudslides.

In Guatemala, the death toll shot up past 50 over the course of the day, according to President Alejandro Giammattei, who said mudslides around the town of San Cristobal Verapaz had swallowed about 25 homes.

"Right now, we're trying to get there on foot because there's no other way," said Giammattei, referring to flooded out roads near the town, located about 120 miles (193 km) north of the Guatemalan capital.

Hundreds of people were left stranded on roofs in Honduras as frantic rescue efforts played out, which were credited with taking around 500 people to safety.

"The situation is serious, it's shocking and needs to be dealt with professionally, fast," Honduran President Juan Orlando Hernandez told HCH television earlier in the day.

Damage and destruction had spread across the "vast majority" of Honduras and speedboats and helicopters would be sent to rescue people in inaccessible areas, Hernandez added.

One of the fiercest storms to hit Central America in years, Eta struck Nicaragua as a Category 4 hurricane on Tuesday with winds of 150 miles per hour (241 kph) before weakening to a tropical depression as it moved inland and into neighboring Honduras.

By Thursday, authorities confirmed seven deaths in Honduras. Media in Nicaragua also reported two miners had died in a mudslide.

Giammattei had already declared a state of emergency in nearly half of the country's 22 departments.

In both Guatemala and Panama, several people have been reported missing as water levels continue to rise.

There was better news in Honduras, where 60 fishermen who disappeared at sea on Tuesday returned after taking shelter on cays until they were rescued, said community leader Robin Morales.

Calling their survival a "miracle," Morales said a man among them presumed dead from a heart attack also made it back.

"Our friends are alive, thank God," he said.

Eta was moving northwest through Honduras toward the Caribbean, at eight miles per hour (13 kph) on Thursday, the U.S. National Hurricane Center (NHC) said. Heavy rains continued and the storm's top winds edged up to 35 mph (56 kph).

One unidentified woman made a desperate plea for help on Honduran television from La Lima, a municipality southeast of San Pedro Sula.

"I've got five children on the roof of my house and nobody's helping me to get them down," she said.

Eta is forecast to return to sea and regain momentum as a tropical storm, possibly reaching the Cayman Islands, Cuba and southern Florida in the coming days, the NHC said.

By Shaina Ahluwalia and Geert De Clercq PARIS (Reuters) - France reported 35,879 new coronavirus cases on Wednesday, taking the total to 1.86 million, overtaking Russia and making France the worst affected country in the European region. With a total of 1,865,538 confirmed cases, France is the fourth-worst affected country in the world for novel coronavirus infections, according to a Reuters tally.

By Jessie Pang and Sharon Tam HONG KONG (Reuters) - Hong Kong's pro-democracy opposition lawmakers said on Wednesday they would resign in protest against the dismissal of four of their colleagues from the city assembly after Beijing gave local authorities new powers to further curb dissent. The Chinese parliament earlier adopted a resolution allowing the city's executive to expel lawmakers deemed to be advocating Hong Kong independence, colluding with foreign forces or threatening national security, without having to go through the courts

SANTIAGO (Reuters) - Chilean authorities have accused a Colombian man of murdering at least seven people, including several who were homeless on the streets of the capital Santiago. Police arrested Diego Ruiz Restrepo, 30, on Monday after using surveillance camera images to identify him, the regional prosecutor's office said on Twitter.