By Orhan Coskun and Nevzat Devranoglu ANKARA (Reuters) - Tayyip Erdogan and his ruling AK Party took a comfortable lead in Turkey's presidential and parliamentary elections on Sunday, according to preliminary partial results, boosting the president's hopes of extending his 15-year rule. The initial results had been expected to give Erdogan and his Islamist-rooted party a strong lead and it was expected to shorten as more votes are tallied across the nation of 81 million people. But an AK Party official said the party expected Erdogan to win more than the required 50 percent to avoid a second round runoff 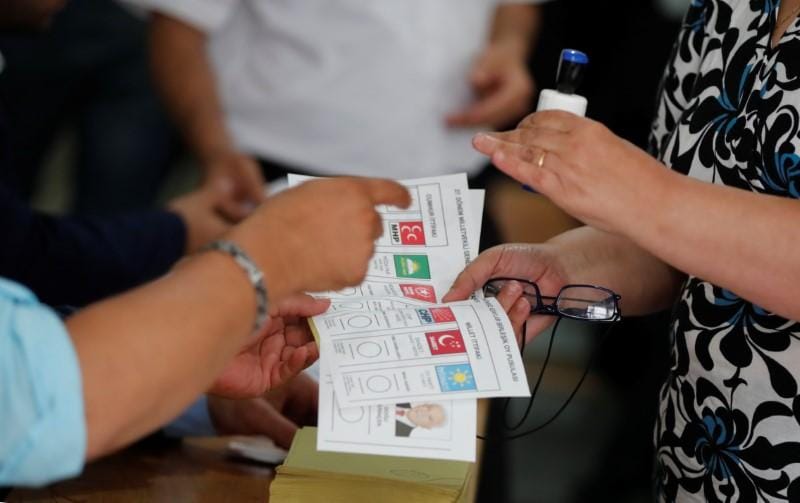 By Orhan Coskun and Nevzat Devranoglu

ANKARA (Reuters) - Tayyip Erdogan and his ruling AK Party took a comfortable lead in Turkey's presidential and parliamentary elections on Sunday, according to preliminary partial results, boosting the president's hopes of extending his 15-year rule.

The initial results had been expected to give Erdogan and his Islamist-rooted party a strong lead and it was expected to shorten as more votes are tallied across the nation of 81 million people.

But an AK Party official said the party expected Erdogan to win more than the required 50 percent to avoid a second round runoff. An unexpectedly strong showing by the AK Party's alliance partner, the nationalist MHP, could also mean Erdogan securing the parliamentary majority he seeks to govern freely.

Sunday's vote ushers in a powerful new executive presidency long sought by Erdogan and backed by a small majority of Turks in a 2017 referendum. Critics say it will further erode democracy in the NATO member state and entrench one-man rule.

With 70 percent of votes counted in the presidential race, Erdogan had 55 percent, ahead of his closest rival, Muharrem Ince, of the main opposition, secularist Republican People's Party (CHP), on 29 percent, broadcasters said.

However, an opposition election platform which is doing its own vote tally based on results gathered by its observers at polling stations gave Erdogan only 43.5 percent and Ince 33.9 percent, based on nearly 12 percent of overall votes cast.

In the parliamentary contest, the AK Party had 45 percent and its MHP ally nearly 12 percent, based on 61 percent of votes counted, broadcasters said. The CHP had 21 percent and the pro-Kurdish Peoples' Democratic Party (HDP) 9.7 percent.

Both the AK Party official and an HDP lawmaker said they expected the HDP to exceed the 10 percent threshold to enter parliament.

Turnout nationwide was high at around 87 percent for both contests, the state broadcaster said.

CHP party spokesman Bulent Tezcan criticised state media coverage of the election results, saying they were trying to manipulate the public's perception of the results in order to demoralise Erdogan's opponents and encourage election monitors to stop scrutinising the counting of votes.

Tezcan said the CHP's own voting tally suggested that support for Erdogan remained below the 50 percent required to win the presidency in the first round.

Opposition parties and NGOs have deployed up to half a million monitors at ballot boxes to ward against possible electoral fraud. They have said election law changes and fraud allegations in the 2017 referendum raise fears about the fairness of Sunday's elections.

Erdogan said there had been no serious voting violations.

"Turkey is staging a democratic revolution," he told reporters after casting his own vote in Istanbul on Sunday.

"With the presidential system, Turkey is seriously raising the bar, rising above the level of contemporary civilisations."

Erdogan, the most popular but also divisive leader in modern Turkish history, argues the new powers will better enable him to tackle the nation's economic problems - the lira has lost 20 percent against the dollar this year - and crush Kurdish rebels in southeast Turkey and in neighbouring Iraq and Syria.

Investors would welcome the prospect of a stable working relationship between the president and the new parliament, although they also have concerns about Erdogan's recent comments suggesting he wants to take greater control of monetary policy.

Erdogan has declared himself an "enemy of interest rates", raising fears he will pressure the central bank to cut borrowing costs after the election despite double-digit inflation.

He brought forward the elections from November 2019, but he reckoned without Ince, a former physics teacher and veteran CHP lawmaker, whose feisty performance at campaign rallies has galvanized Turkey's long-demoralised and divided opposition.

Turkey held Sunday's elections under a state of emergency declared after a failed military coup in July 2016. This state restricts some freedoms and allows the government to bypass parliament with decrees. Both Erdogan and Ince have said they will lift the state of emergency as president.

Erdogan blamed the coup on his former ally, U.S.-based Muslim cleric Fethullah Gulen, and has waged a sweeping crackdown on his followers in Turkey, detaining some 160,000 people, according to the United Nations.

The president's critics, including the European Union which Turkey still nominally aspires to join, say Erdogan has used the crackdown to stifle dissent.