By Jonathan Landay, Andy Sullivan and David Lawder WASHINGTON (Reuters) - Joe Biden became the 46th U.S. president on Wednesday in a barricaded city, guarded by more than 25,000 troops and emptied of the spectators who usually throng to the quadrennial ritual 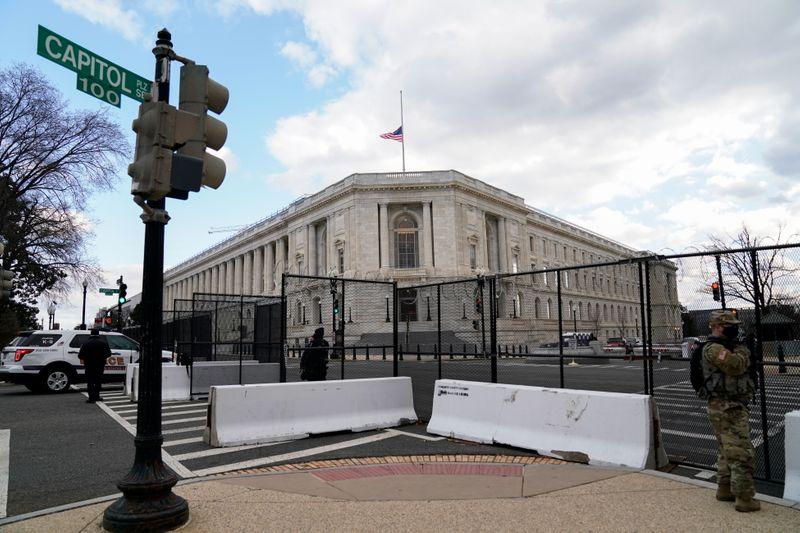 WASHINGTON (Reuters) - Joe Biden became the 46th U.S. president on Wednesday in a barricaded city, guarded by more than 25,000 troops and emptied of the spectators who usually throng to the quadrennial ritual.

The unprecedented precautions, which fenced off much of downtown Washington, ensured that Biden and Vice President Kamala Harris took their oaths of office at 11:48 a.m. EST (1648 GMT) free of incident.

"This is the day when our democracy picks itself up, brushes off the dust and does what America always does -- goes forward as a nation," Democratic Senator Amy Klobuchar said as the ceremony began.

Some right-wing extremist groups had vowed to disrupt Biden's inauguration in the wake of a Jan. 6 attack on the U.S. Capitol that left five people dead, including a Capitol Police officer. Analysts said few signs of an organized plot had emerged, though the threat of violence by radicalized individuals remained a concern.

Earlier on Wednesday morning, outgoing President Donald Trump left the White House for the final time, his helicopter flying over thousands of American and state flags planted in the National Mall. The banners stood in for the hundreds of thousands of people who gathered for past inaugurations to watch the proceedings on big-screen televisions.

A handful of visitors lingered outside Union Station, the city's normally bustling train terminal. "I'm looking forward to some change and cautiously optimistic," said Victor Duran, 22, a student from Dallas.

A small group of protesters stood outside the perimeter. "If Joe Biden wants to take America to hell, go right ahead!" one shouted through a bullhorn.

Dennis Pluchinsky, a former State Department terrorism analyst, said any protests would not disrupt the event. "All they are trying is to fly their flag and poison the inauguration," he said.

Two demonstrations that had been planned along the parade route between the Capitol and the White House have been canceled, according to the National Park Service.

The security precautions, along with a coronavirus pandemic that has prompted many to avoid public gatherings, left city streets largely empty in the nation's capital.

"It's, frankly, painful to see this, the whole city shut down," former Republican Senator Jeff Flake told reporters as he arrived at the Capitol.

On Tuesday, Pentagon officials said a dozen National Guard members had been removed from inauguration duty after troops were screened for potential ties to right-wing extremism and troubling text messages.

Bridges between Virginia and downtown Washington have been closed, as were downtown Metro stations.

Some intercity bus services and passenger trains were been suspended.

With inaugural balls and other parties previously canceled due to the coronavirus pandemic, the event has taken on a somber tone in Washington.

After Twitter and Facebook suspended accounts calling for violence, organizing activity has been pushed onto unmoderated channels such as 8kun.

"The FBI appears to be taking these threats seriously, but disciplined lone wolf actors, regardless of ideology, are extremely difficult to track," said Daniel Jones, president of Advance Democracy, a nonprofit research group.