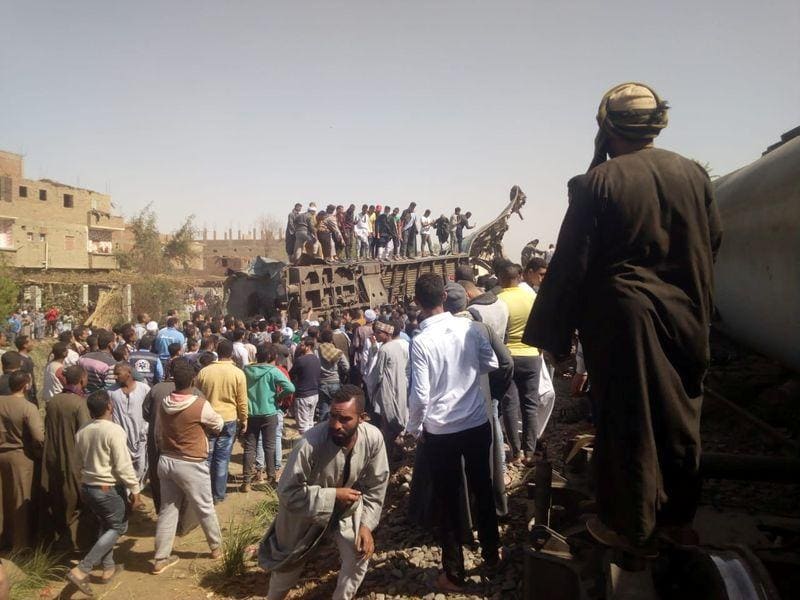 "Unknown individuals" triggered the emergency brakes on one of the trains causing it to stop, the rail authority said. The second train, which was travelling in the same direction, crashed into the first from behind, it added.

Pictures showed train carriages derailed, several of them badly damaged, above a channel of water, as crowds looked on.

Some of the injured would need to be airlifted to the capital Cairo for treatment, officials said.

The public prosecutor's office said it had ordered an investigation into the crash, which took place close to the Nile-side town of Tahta, about 365 km (230 miles) south of Cairo.

Egypt has one of the oldest and largest rail networks in the region and accidents involving casualties are common. Egyptians have long complained that successive governments failed to enforce basic safeguards.

In the country's worst train disaster, a fire tore through seven carriages of an overcrowded passenger train in 2002, killing at least 360 people.

"(The rail network) has witnessed decades of neglect and no development or maintenance to a very dangerous extent," Prime Minister Mostafa Madbouly said after heading to the site of the crash with several ministers.

"We have thousands of kilometres of rail lines, control and management systems dependent on manual labour and cars that are very old and past their period of service by many years."

The government was investing billions in modernising the rail network but still had much work to do, he added.

President Abdel Fattah al-Sisi said those responsible would be punished, asked the government to double the normal financial compensation for casualties in public transport accidents.