By Patricia Zengerle, Matt Spetalnick and David Brunnstrom WASHINGTON (Reuters) - A push in the U.S. Congress for legislation to support pro-democracy protests in Hong Kong and pressure China to refrain from a violent crackdown faces an array of obstacles, raising questions about the prospect it will ever become law. The fate of the legislation could depend in part on whether lawmakers who represent states with companies heavily invested in the Chinese market can overcome concerns about Beijing's retaliation against U.S. 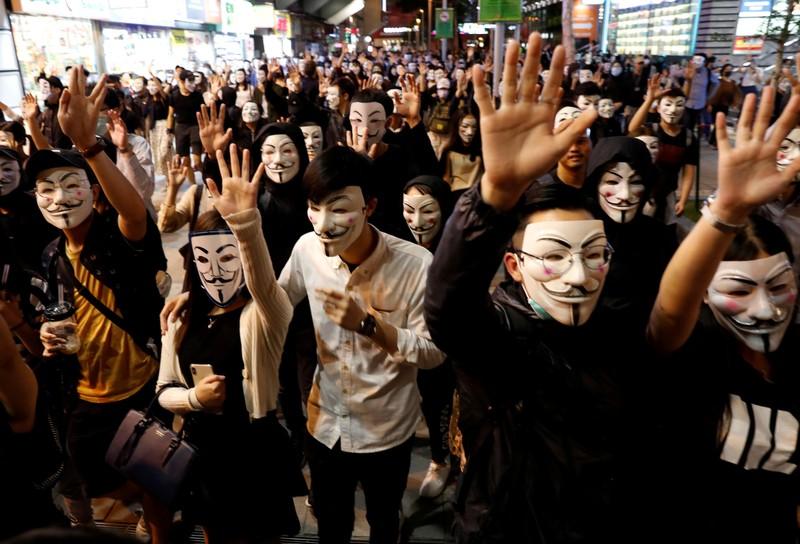 WASHINGTON (Reuters) - A push in the U.S. Congress for legislation to support pro-democracy protests in Hong Kong and pressure China to refrain from a violent crackdown faces an array of obstacles, raising questions about the prospect it will ever become law.

The fate of the legislation could depend in part on whether lawmakers who represent states with companies heavily invested in the Chinese market can overcome concerns about Beijing's retaliation against U.S. businesses.

The outlook is further clouded by a cautious response on Hong Kong by the Trump administration at a crucial juncture for U.S.-China trade talks and uncertainty over whether congressional leaders will make the issue a priority on a crowded end-of-year agenda.

The House of Representatives unanimously passed Hong Kong human rights legislation in mid-October, including a bill that would place Hong Kong's special treatment by the United States under tighter scrutiny, drawing accusations from Beijing that the lawmakers had "sinister intentions."

A Senate committee approved a similar measure in September, but it has not been scheduled for a vote by the full body, which is required before legislation can be sent to President Donald Trump. The White House has yet to say whether he would sign or veto it.

Even as Hong Kong activists have set their hearts on stronger U.S. action, which they see as vital to a movement that has drawn millions to the streets, the issue remains largely up in the air in Washington.

The bill's delay - against a backdrop of increasingly dangerous clashes between protesters and police - has been a source of frustration for lawmakers whose overwhelming support for the legislation cuts across party lines.

“Your guess is as good as mine as to why something that enjoys that broad, bipartisan support - and on an issue that’s acute and happening now - has not reached the floor of the U.S. Senate,” Republican Senator Marco Rubio, a leading China hawk and the bill's chief co-sponsor, told Reuters.

Looming over the Hong Kong crisis is the bitter trade war between the world’s two biggest economies. Trump has said he and Chinese President Xi Jinping will soon sign a “Phase One” trade deal, his administration's top priority with Beijing.

At an Oct. 11 meeting in the Oval Office, Trump told Chinese Vice Premier Liu He he would keep quiet on the Hong Kong protests as long as progress was being made on trade, according to two people briefed on the discussions.

The White House did not respond to a question on whether Trump made such a promise or if the administration was concerned the Hong Kong situation could complicate trade talks.

While Trump has since avoided publicly criticizing China over Hong Kong, Vice President Mike Pence and Secretary of State Mike Pompeo have spoken out against Beijing’s human rights record in Hong Kong and elsewhere, including its treatment of Uighur Muslims in Xinjiang. [L2N27L0TM]

The legislation reflects an increasingly hard-line sentiment among some of Trump’s fellow Republicans and many Democrats over what they see as Beijing’s tightening grip on Hong Kong.

Protesters are campaigning against what they see as Chinese meddling with the freedoms promised under the "one country-two systems" formula when Britain returned Hong Kong to Chinese rule in 1997. China denies doing so, and has blamed Western countries for stirring up trouble.

The U.S. bills would amend existing law to require annual certification from the State Department that Hong Kong remains sufficiently autonomous from Beijing to justify the

unique treatment by Washington that has helped it to develop into a major financial centre.

China has threatened unspecified countermeasures, prompting the American Chamber of Commerce in Hong Kong to warn of “counterproductive consequences” of the legislation that could hurt U.S. businesses.

That has given rise to speculation that some senators, especially those in agricultural states or with major China-dependent businesses, would prefer a go-slow approach and might even work behind the scenes to block the legislation.

Mark Simon, a Hong Kong-based executive for Next Media, a media group funded by pro-democracy businessman Jimmy Lai, is pessimistic about the Senate bill's near-term prospects after a recent round of meetings with members of Congress in Washington.

Simon expressed concern that as many as nine senators might have objections to the bill – though none has said so publicly. "The U.S. Senate, by refusing to stand up for Hong Kong, is editing our political process in order to sell some grain, pork, and planes," he told Reuters.

Rubio said he had not heard objections from fellow senators, but noted it could be "somehow wrapped up in the broader trade issues and fear that it could unravel that.”

Despite activists' clamouring for U.S. action, some experts say it could be counterproductive.

Steve Tsang, director of the China Institute at the University of London’s School of Oriental and African Studies, said the legislation "would play into Beijing’s hands by claiming it as evidence of the existence of a ‘foreign black hand’ behind the protests in Hong Kong."

Bills similar to the current legislation have been introduced and gone nowhere in the past three Congresses, but the protracted crisis in Hong Kong has helped the measures advance further than previously.

The White House did not respond to requests for comment. But a U.S. official speaking on condition of anonymity said the administration was prepared to let the congressional process run its course.

It is unclear whether Senate Majority Leader Mitch McConnell will set a vote on a bill during an already jammed schedule in the final weeks of the 2019 session, including the threat of a federal government shutdown and looming impeachment proceedings against Trump.

One way to get around those obstacles, congressional aides say, would be to attach the Hong Kong legislation to a broader Senate bill on defence or the budget.