By Philip Pullella VATICAN CITY (Reuters) - Pope Francis, in his Easter Sunday address, condemned as 'such cruel violence' the bombings in Sri Lanka that killed more than 100 people and were timed to coincide with the most important day in the Christian liturgical calendar. Francis, speaking to a crowd of about 70,000 people in St. 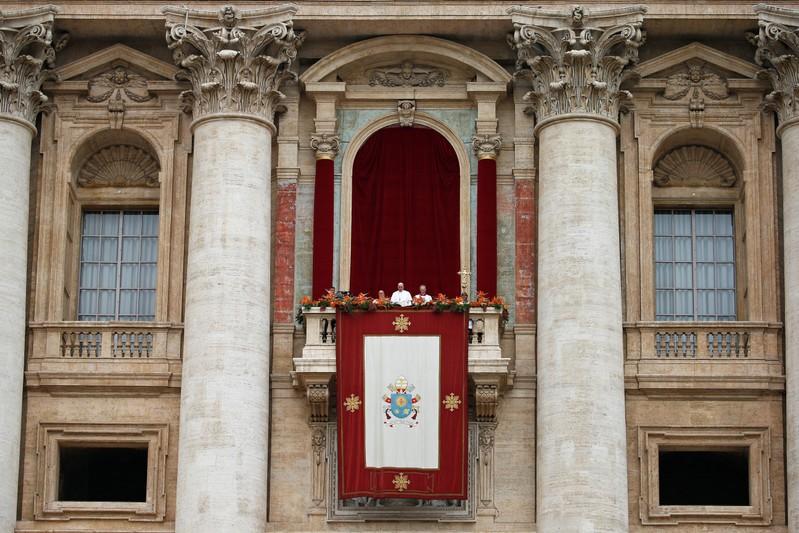 VATICAN CITY (Reuters) - Pope Francis, in his Easter Sunday address, condemned as "such cruel violence" the bombings in Sri Lanka that killed more than 100 people and were timed to coincide with the most important day in the Christian liturgical calendar.

Francis, speaking to a crowd of about 70,000 people in St. Peter's Square, also urged politicians to shun a new arms race that was budding and to welcome refugees fleeing hunger and human rights violations.

The blasts in Sri Lanka, which hospital and police officials said killed at least 138 people and wounded more than 400 people, followed a lull in major attacks since the end of the civil war 10 years ago.

"I learned with sadness and pain of the news of the grave attacks, that precisely today, Easter, brought mourning and pain to churches and other places where people were gathered in Sri Lanka," Francis said in his traditional Easter Sunday "Urbi et Orbi" (to the city and the world) message.

"I wish to express my affectionate closeness to the Christian community, hit while it was gathered in prayer, and to all the victims of such cruel violence," the pope, who visited Sri Lanka in 2015, said.

Speaking from the central balcony of St. Peter's Basilica, he appealed for peace in conflict areas.

"Before the many sufferings of our time, may the Lord of life not find us cold and indifferent," he said, speaking in Italian after celebrating a Mass in the square.

"May he make us builders of bridges, not walls. May the One who gives us his peace end the roar of arms, both in areas of conflict and in our cities, and inspire the leaders of nations to work for an end to the arms race and the troubling spread of weaponry, especially in the economically more advanced countries," he said.

Francis has made defence of migrants a key feature of his pontificate and has clashed over the immigration with politicians such as U.S. President Donald Trump and Italy's Interior Minister Matteo Salvini who leads the anti-immigrant League party and has closed Italy's ports to rescue ships operated by charities.

"May the Risen Christ, who flung open the doors of the tomb, open our hearts to the needs of the disadvantaged, the vulnerable, the poor, the unemployed, the marginalized, and all those who knock at our door in search of bread, refuge, and the recognition of their dignity," Francis said.

He called for a solution to the conflict in Syria that responds to "people's legitimate hopes for freedom, peace and justice" and favours the return of refugees.

Francis urged dialogue in order to end fighting in Libya, appealing to both sides to "choose dialogue over force and to avoid reopening wounds left by a decade of conflicts and political instability".

He called for politicians in Venezuela "to end social injustices, abuses and acts of violence, and take the concrete

steps needed to heal divisions and offer the population the help they need".

Francis encouraged the fragile peace process in mostly Christian South Sudan, whose leaders attended an unprecedented spiritual retreat earlier this month at the Vatican where he begged them to avoid returning to a civil war.