WASHINGTON (Reuters) - It was the night before Christmas, and U.S. President Donald Trump was on the phone with children, peppering them with questions about whether they were looking forward to the holiday 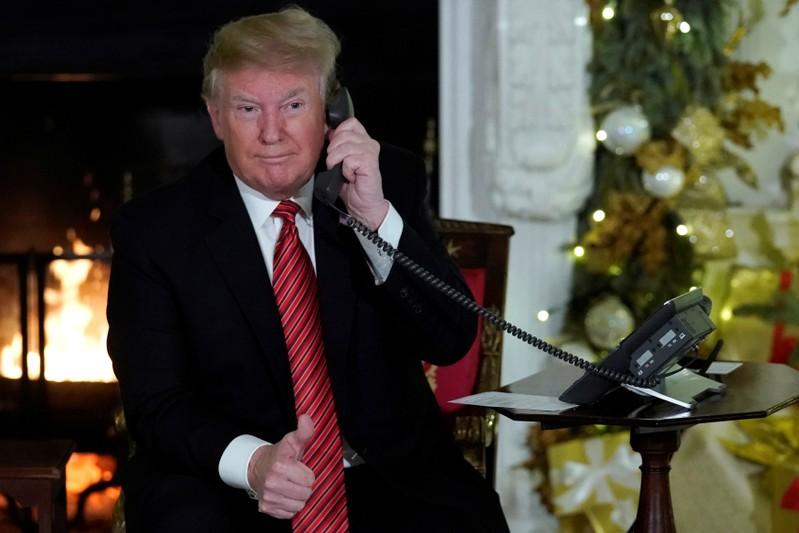 WASHINGTON (Reuters) - It was the night before Christmas, and U.S. President Donald Trump was on the phone with children, peppering them with questions about whether they were looking forward to the holiday.

Every Christmas Eve, the North American Aerospace Defense Command in Colorado Springs, Colorado, claims to track Santa Claus' flight across the globe, a tradition dating to 1955, when a department store printed the phone number of a NORAD colonel in a Christmas newspaper ad by mistake.

This year, though, the NORAD calls came at a precarious time for the president, who is mired in crises, from a government shutdown that has affected a quarter of federal agencies and departments to a stock market selloff amid Trump's public criticisms of the Federal Reserve.

The NORAD calls were the first time Trump has been seen in public since the shutdown began. NORAD said on Friday it would continue the tradition in the event of a shutdown, adding in a tweet that military personnel would be supported by 1,500 volunteers.

Trump, who had been scheduled to leave for his Florida vacation home on Friday, has opted instead to stay at the White House during the shutdown so far, which occurred after he and top lawmakers failed to end an impasse over funding for his proposed wall along the border with Mexico.

Instead of enjoying the warmth of the Florida sun, Trump has spent the lead-up to the holiday meeting with lawmakers and Cabinet officials.

"I am all alone (poor me) in the White House waiting for the Democrats to come back and make a deal on desperately needed Border Security," Trump tweeted on Monday.

Trump's Republican Party holds majorities in both congressional chambers until Jan. 3, when Democrats take control of the House of Representatives.

But with the children, Trump appeared to try to keep things light as he sat beside his wife, Melania, in front of a roaring fireplace beneath a portrait of former President Abraham Lincoln.

"Are you still a believer in Santa?" he asked his interlocutor.

But even Christmas could not keep out news about the shutdown. Asked by reporters if any progress had been made on government funding talks, Trump said there was nothing to report.