Washington: President Donald Trump cranked up the heat on Attorney-General Jeff Sessions, scorning him as "very weak" and refusing to say whether he'll fire the nation's top law enforcement officer and his onetime political ally. It was an extraordinary public rebuke, and even fellow Republicans pushed back forcefully.

All through a day of anything-but-subtle tweets and statements, Trump rued his decision to choose Sessions for his Cabinet and left the former senator's future prospects dangling. "We will see what happens," Trump said. "Time will tell. Time will tell."

His intensifying criticism has fuelled speculation that the Attorney-General may step down even if the president stops short of firing him. But several people close to the former Alabama senator have said he does not plan to quit.

In private, Trump raged to confidants that Sessions had been disloyal in recusing himself from the federal investigation of Russia's meddling in the presidential election and the possibility of collaboration with the Trump campaign. Sessions himself had met with Russian Ambassador Sergey Kislyak before the election as a representative of the Trump campaign and thus stepped aside from the probe.

As he has previously, Trump said he would have "quite simply picked someone else" for the job if he'd known Sessions would recuse himself. He called Sessions' decision a "bad thing for the presidency," changing a word from his previous comments that it had been bad for "the president." He also said the Attorney-General ought to get cracking on stopping leaks from federal intelligence agencies.

The president's first broadside of the day came in a tweet: "Attorney General Jeff Sessions has taken a VERY weak position on Hillary Clinton crimes (where are E-mails & DNC server) & Intel leakers!"

Trump's harsh words drew a strong response from a number of Sessions' former Senate colleagues, suggesting that all Republicans may not fall in line this time behind the president.

Former South Carolina Senator Jim DeMint said he understood Trump's frustration with "the endless media obsession over Russia" and his inability to get his agenda through Congress. But he cautioned that "pushing Jeff Sessions out won't get Congress to move forward on his policies or stop liberals attacks. And Trump would lose a great ally and widely respected advocate for the rule of law."

Statements of support came from Family Research Council President Tony Perkins and Jenny Beth Martin, who leads the Tea Party Patriots House Speaker Paul Ryan took a hands-off approach, saying simply: "The president gets to decide what his personnel is."

Some White House aides and Trump confidants have begun discussing how to move on beyond Sessions, while others have cautioned the president against firing a figure popular among conservatives — especially during the heat of the Russia probe.

Should Sessions depart, several scenarios could unfold. If Trump follows his own executive order outlining a succession plan, Deputy Attorney General Rod Rosenstein would become acting attorney general until a successor was nominated and confirmed by the Senate. That would leave the president, at least initially, with another Attorney-General of whom he has been sharply critical in both public and private for his handling of the Russia probe. 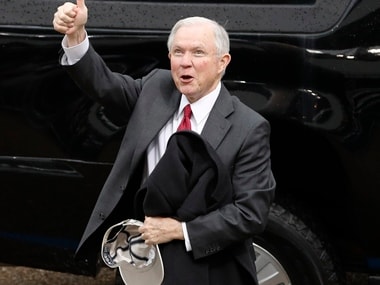 But Trump also could invoke his authority under the federal Vacancies Act to temporarily fill the slot with someone of his choice who has already been confirmed by the Senate to another position. That could include Cabinet members or other top Justice Department officials— but only if the Attorney-General resigned as opposed to being fired, said University of Texas law professor Stephen Vladeck.

Another option: A recess appointment would allow Trump to appoint anyone of his choosing to be Attorney-General if the Senate recesses for 10 days or more in August. This would allow the president to bypass Senate confirmation until 2019. But the length of an August recess remains uncertain, and Democratic Senator Chuck Schumer of New York has vowed to fight such an appointment.

Sessions' exit could also raise the spectre of Trump asking Rosenstein — or whomever he appoints to fill the position — to fire Robert Mueller, the special counsel leading the investigation into Russia's meddling in the 2016 election and potential collusion with Trump's campaign. That would seem to fulfil the vision of the Justice Department that Trump's critics believe he articulated during the campaign: a place that, at his direction, will punish his political enemies.

The White House was intent on tightening the vise on Sessions. Anthony Scaramucci, the president's new communications director, said in an interview with radio host Hugh Hewitt that Trump is "obviously frustrated" with Sessions. When Hewitt said it was clear that Trump wants Sessions gone, Scaramucci replied, "You're probably right."

White House Deputy Press Secretary Sarah Huckabee Sanders told Fox News' "Fox & Friends" that the president was "frustrated and disappointed" with Sessions for recusing himself from the Russia probe.

"That frustration certainly hasn't gone away. And I don't think it will," she said.

Trump often talks about making staff changes without following through, so those who have spoken with the president cautioned that a change may not be imminent or happen at all.