DOJ declines to prosecute Comey despite finding that he leaked info 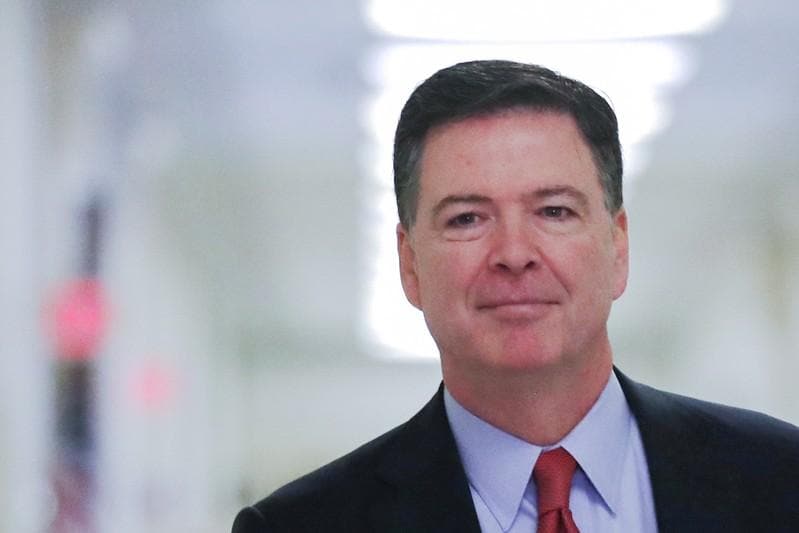 WASHINGTON (Reuters) - The U.S. Justice Department has decided not to prosecute former FBI Director James Comey despite an internal investigation that found he improperly leaked information to the news media, the department's internal watchdog said on Thursday.

The Justice Department's Office of Inspector General said Comey asked a friend to share the contents of a memo with the New York Times to pressure the department to launch an independent investigation into his conversations with President Donald Trump.

In the memo, Comey described a meeting in which Trump allegedly asked him to drop the FBI's investigation into Michael Flynn, who at the time was his national security adviser. Flynn has since pleaded guilty to lying to the FBI about his conversations with Russian officials.

Comey signed off on an investigation into the Trump campaign's possible ties to Russia during the 2016 election and later emerged as a prominent critic of the president after Trump fired him in May 2017. Trump and many of his allies say that investigation should never have begun.

The Justice Department appointed a special counsel, Robert Mueller, to handle the investigation after Comey left. That probe unearthed numerous contacts between the campaign and Russian officials but concluded that there was not enough evidence to establish a criminal conspiracy.

Mueller's final report did not reach a conclusion as to whether Trump's efforts to interfere with the probe amounted to criminal obstruction of justice, but it also did not exonerate the president. Attorney General William Barr concluded that he did not see enough evidence to bring obstruction charges.

The Inspector General said on Thursday that while Comey's memo did not contain classified material, he set a dangerous example when he shared sensitive information to create public pressure for official action.

"Were current or former FBI employees to follow the former Director's example and disclose sensitive information in service of their own strongly held personal convictions, the FBI would be unable to dispatch its law enforcement duties properly," the report said.

Comey said on Twitter that people who have accused him of sharing classified information should apologize.

"To all those who've spent two years talking about me 'going to jail' or being a 'liar and a leaker'—ask yourselves why you still trust people who gave you bad info for so long, including the president," he said.

It is the second time Comey has been criticized by the Inspector General's office, which concluded last year that he made a "serious error of judgment" when he announced shortly before the 2016 election that he was re-opening an investigation into Democratic candidate Hillary Clinton's use of a private e-mail server when she was secretary of State.

Trump said on Thursday: "Perhaps never in the history of our Country has someone been more thoroughly disgraced and excoriated than James Comey in the just released Inspector General's Report. He should be ashamed of himself!"

White House spokeswoman Stephanie Grisham called Comey a "liar and a leaker" and said his decision to share information with the press led to a "baseless, politically motivated, two-year witch hunt."

Comey wrote seven memos during the first few months of Trump's presidency, detailing one-on-one meetings in which Comey says Trump demanded loyalty and tried to influence the actions of the FBI, which is supposed to enforce the law in an impartial manner.

The Inspector General's report said Comey should not have held on to the memos after he was fired because they were official FBI documents. Comey gave one of them to his friend Dan Richman and told him to share it with a New York Times reporter, according to the report. Richman declined to comment.

Congress made redacted versions of those memos public last year.

FBI spokesman Brian Hale said the report underscored the need for all agency employees, regardless of position, to obey rules about official records. The Justice Department declined to comment.

Some Republicans said the Inspector General's report provides more evidence that the FBI was motivated by political considerations when it started investigating the Trump campaign's contacts with Russia.

"This is the first of what I expect will be several more ugly and damning rebukes of senior DOJ and FBI officials regarding their actions and biases toward the Trump campaign of 2016," Senate Judiciary Committee Chairman Lindsey Graham said in a statement.

The Inspector General's office is currently examining the FBI's conduct during the investigation, and Barr is also overseeing two inquiries into the origins of the Mueller probe: one led by John Durham, the top federal prosecutor in Connecticut, and another involving senior intelligence officials.

Although the Justice Department will not prosecute Comey, he could face other disciplinary action because the Inspector General's report has been referred to the FBI and the department's Office of Professional Responsibility, which investigates employee misconduct.

Democrats in Congress are split as to whether Trump should be impeached for the actions detailed in Mueller's report, while Republicans have largely stood by the president.