By Elizabeth Piper LONDON (Reuters) - Parliament cannot be allowed to hijack Brexit, Trade Minister Liam Fox said on Sunday, in a warning to lawmakers who want to take more control over Britain's departure from the European Union. With just weeks to go before Britain is due to leave the EU, Prime Minister Theresa May will return to parliament on Monday to set out how she plans to try to break the Brexit deadlock after her deal was rejected by lawmakers last week 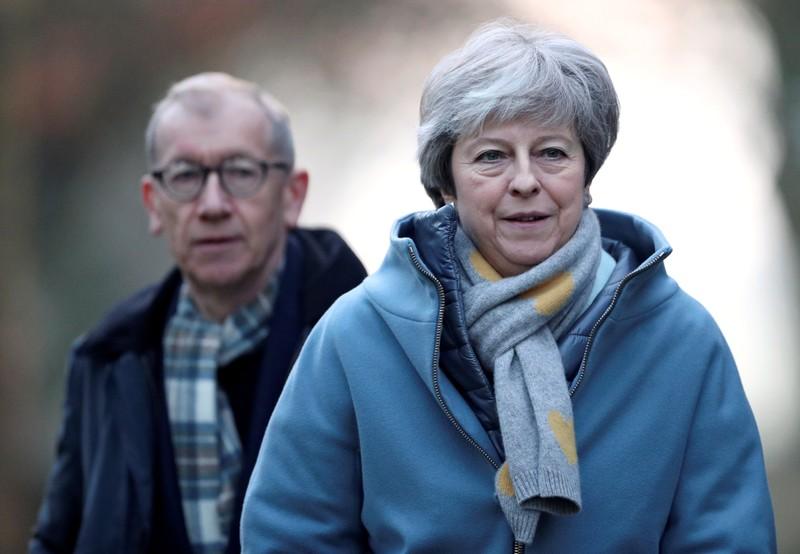 LONDON (Reuters) - Parliament cannot be allowed to hijack Brexit, Trade Minister Liam Fox said on Sunday, in a warning to lawmakers who want to take more control over Britain's departure from the European Union.

With just weeks to go before Britain is due to leave the EU, Prime Minister Theresa May will return to parliament on Monday to set out how she plans to try to break the Brexit deadlock after her deal was rejected by lawmakers last week.

She will also speak to ministers on Sunday on a conference call, a government source said, as the prime minister tries to navigate a way through the competing visions for the future from a second referendum to staying in the EU.

Time is running out for Brexit, Britain's biggest shift in foreign and trade policy in more than 40 years, but so far there is little that unites a divided parliament beyond its rejection of May's deal that envisages close economic ties with the EU.

Britain's main opposition Labour Party is pressing for a new election and for May to rule out the possibility of a no-deal Brexit, while others in parliament are lobbying for anything from a second referendum to leaving without an agreement.

Fox, a Brexit supporter, told the BBC's Andrew Marr Show that May's divorce agreement with the EU was still the best basis for a deal and warned lawmakers against trying to take more control of Britain's departure.

"Parliament has not got the right to hijack the Brexit process because parliament said to the people of this country: 'we make a contract with you, you will make the decision and we will honour it'," Fox said.

"What we are now getting are some of those who were always absolutely opposed to the result of the referendum trying to hijack Brexit and in effect steal the result from the people."

Britain voted with a 52 percent majority to leave the EU in a 2016 referendum that exposed deep divisions across the country, divisions that still split cities and towns, and the country's parliament, almost three years on.

After seeing her deal rejected by more than 200 lawmakers last week, May has opened talks with other parties to try to find a way to break the deadlock.

But with Labour refusing to take part until May rules out leaving without a deal, some lawmakers fear those talks will change little and instead have said they will launch attempts next week to force the government to change course.

Several are trying to make sure Britain does not "accidentally" leave without a deal on March 29, a scenario some businesses say would be catastrophic for the economy.

"What happens when you have a hung parliament is that power does pass from government ... to parliament and that's what we are seeing play out," Nicky Morgan, a Conservative former minister, told Sky News.

She said she was backing a bill that would force the government to extend Article 50, which triggered Britain's two-year talks to leave the EU, if it cannot get an agreement approved by parliament by the end of February.

Dominic Grieve, another Conservative lawmaker, is also looking at ways to stop Britain from leaving without a deal.

With much of the focus now on Labour, its Brexit spokesman Keir Starmer said there was now only really two options that could find majority support - a future close economic relationship with the EU or a second referendum - and that it was increasingly inevitable that Article 50 would be extended.

"We've arrived at phase three and therefore we need to be realistic about what the options are," Starmer told the BBC.

"Let's ... reduce it to the options that are at least capable of getting a majority and that is a close economic relationship and a public vote."