BROWNVILLE, Neb. (Reuters) - Emergency officials in Southern U.S. states kept a wary eye on the Missouri and Mississippi rivers as massive flooding that killed four people and caused more than $1 billion in estimated damages to homes, businesses and crops threatened to extend south 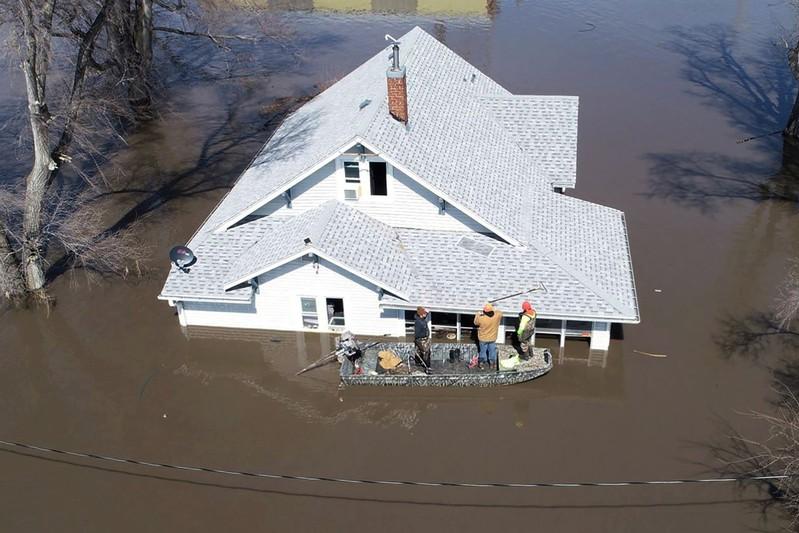 BROWNVILLE, Neb. (Reuters) - Emergency officials in Southern U.S. states kept a wary eye on the Missouri and Mississippi rivers as massive flooding that killed four people and caused more than $1 billion in estimated damages to homes, businesses and crops threatened to extend south.

Floodwaters resulting from a late-winter storm last week and warming spring weather that melted snow quickly this week inundated a large swath of Midwestern farm states Missouri, Nebraska and Iowa along the Missouri, North America's longest river. States of emergency have been declared in all or parts of the three states.

In the South, Mississippi, which lies downstream from the floodwaters, declared a state of emergency as it prepared for the inundation to spread.

In Arkansas, emergency officials said they were monitoring the situation but did not believe flooding would reach crisis levels.

"The majority of our lakes are not overfilled yet," meaning there were still safe places for floodwater to flow to, said Melody Daniel, a spokeswoman for the Arkansas Department of Emergency Management.

Kansas and Missouri emergency officials did not immediately respond to requests for comment.

The National Weather Service expects warm weather in the north-central United States to continue into Thursday and Friday, triggering more accelerated snow melt, meteorologist Rich Otto said in a phone interview. About an inch (2.5 cm) of rain is predicted for Saturday in the region.

In northwestern Missouri, where waters were still rising and rivers had not yet crested, farmer Howard Geib, 54, had a close call.

"I was driving out to get one more load of corn from the bins when the levee broke, and there was a wall of water coming at me," said Geib, 54, whose farm is near a town called Craig.

"I was on the phone with my son-in-law, who was driving out to help, telling him, 'Stop! Stop! Turn around!'"

Vice President Mike Pence toured some of Nebraska on Tuesday and promised to help expedite federal help to the region.

In Plattsmouth, Nebraska, just south of the junction of the Platte and Missouri Rivers, a convenience store manager said residents were struggling with the disaster and hoping the worst was over.

"There's a lot of people that lost a lot of stuff, but the water's starting to go down, so we're moving in the right direction," said a woman who identified herself only as Kathy at Casey's General Store, which she said had escaped flood damage.

Four people have been killed by floodwaters in Nebraska and Iowa since the weekend, officials said.

Authorities said they had rescued nearly 300 people in Nebraska alone, with some rivers continuing to rise.

The flooding killed livestock, destroyed grains and soybeans in storage and cut off access to farms because of road and rail damage.

Nebraska officials estimated flood damage for the state's agricultural sector at more than $1 billion, according to Craig Head, vice president of issue management at the Nebraska Farm Bureau. Head said that was likely to grow as floodwaters recede.

"It's really too early to know for sure how bad this is going to get. But one thing we do know: It's catastrophic for farmers," said Matt Perdue, government relations director for the National Farmers Union.

Nebraska officials estimate the floods have also caused $553 million in damage to public infrastructure and other assets, and $89 million to privately owned assets, according to the state's Emergency Management Agency on Tuesday.

Roads leading to the Nebraska Public Power District's Cooper nuclear plant near Brownville were engulfed by floodwaters from the Missouri, but the facility was still operating safely at full power on Wednesday.

Offutt Air Force Base near Omaha, which houses the U.S. Strategic Command, remained heavily flooded, though base officials posted on Twitter that the facility was still "mission-capable." The Strategic Command's mission includes defending against and responding to nuclear attacks.

"We're looking for it to recede by late tomorrow," Drew Nystrom, a spokesman for the base, said on Wednesday. "It's gonna take a concentrated effort and many months to get everything back to normal."