Despite thumping electoral win, Sheikh Hasina must guard against complacency and autocratic impulses

After the change of power in the Maldives, 2018 ended with one more positive development for Narendra Modi government's neighbourhood policy. Bangladesh's ruling Awami League returned to power for a third consecutive term. Sheikh Hasina is all set to become the Prime Minister of Bangladesh for the fourth time. It is no surprise that Modi was the first foreign leader to congratulate Hasina.

The General Election results have reflected a one-sided show of strength, almost as if there was no political party other than the Awami League in the contest. The party's main rival, the Bangladesh Nationalist Party (BNP), participated in the election with its leader Khaleda Zia in prison and despite the non-fulfilment of its major demand of the dissolution of the current Parliament before the polls.

The Hasina government has received brickbats for silencing free-thinking intellectuals. None of the killers of liberal bloggers have been arrested either. Rules governing the Internet have been modified in order to limit freedom of speech. However, the change Hasina has been presiding over seems better for ordinary Bangladeshis. Although she is often accused of running an authoritarian government, her regime has implemented policies that have spurred economic growth and provided political stability. Known for her hardline approach to religious extremism, Hasina has paid particular attention to empowering women. 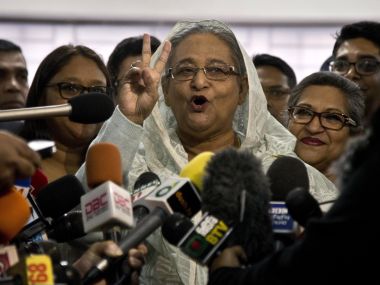 She has received international praise for sheltering more than 7,50,000 Rohingya refugees who were forced out of Myanmar. Due to impressive socio-economic policies, the Opposition parties struggled to offer any cohesive economic vision during the electoral campaign. Although they attacked official corruption and promised double-digit growth, there were no details about how this would be achieved. Critics termed the lofty promises contained in their manifesto as too good to be believed. Therefore despite the challenge to the Awami League by the Opposition alliance, there will be no change as far as the outcome is concerned. The Hasina regime is here to stay for another five years.

But Hasina's grand electoral triumph has not been without blemish. The outcome has prompted the BNP-led Opposition alliance to demand scrapping the polls amid calls for a fresh election. However, the observers from India, SAARC and the Organisation of Islamic Cooperation (OIC) have endorsed these elections. It may be noted further that the BNP-led alliance had boycotted the 2014 parliamentary vote, alleging that free elections were not possible under the Hasina government.

The new Bangladeshi Parliament will be almost without representation of the Opposition parties. What really makes any government truly democratic and participatory in nature is the presence of a strong Opposition in the Parliament. The virtual absence of the BNP in the Parliament does not augur well for Bangladesh, which requires the further institutionalisation of  ademocratic ethos and institutions. The monolithic one-party system is ultimately corrosive for the overall health of any democracy, more so of a developing country like Bangladesh, as it leads to the curtailment of civil liberties and leads to political institutions being subjugated by the all-powerful executive and the denial of the freedom of the press.

It would be such a huge tragedy if Hasina gets projected as a dictator immediately after one of the spectacular electoral victories she has achieved for the Awami League.

However, Opposition leaders are unlikely to sit idly amidst this one-sided victory, the margin of which seems suspiciously mammoth. They are expected to step up their demands for holding fresh elections under a caretaker administration in order to avoid the repeat of 'electoral malpractices'. Otherwise, they face political oblivion during the next five years. The BNP's decision to boycott the oath-taking ceremony of the newly-elected parliamentarians is clearly intended to put pressure on the Hasina regime to accede to the Opposition demands.

It is beyond belief that a political party or a coalition, however strong or broad-based, could actually win more than 90 percent of the parliamentary seats. This seems to have led the United States and European Union to ask the Bangladesh authorities to pay heed to the Opposition's demands. The US State Department, in a statement, has noted "with concern credible reports of harassment, intimidation, and violence in the pre-election period that made it difficult for many Opposition candidates and their supporters to meet, hold rallies, and campaign freely. We are also concerned that election-day irregularities prevented some people from voting, which undermined faith in the electoral process. We strongly encourage all parties to refrain from violence and request the Election Commission work constructively with all sides to address claims of irregularities".

The European Union, while praising the "mobilisation of voters and the participation of the Opposition in the elections for the first time in 10 years", has also has asked Bangladesh to investigate election-related irregularities. In a statement, it said that "violence has marred the election day, and significant obstacles to a level playing field remained in place throughout the process and have tainted the electoral campaign and the vote. The relevant national authorities should now ensure a proper examination of allegations of irregularities and commit to full transparency in their resolution". It would be difficult for the Hasina government to deflect the mounting international pressure to investigate the Opposition's allegations.

The BNP's desperation to re-enter mainstream politics can be understood by the fact that the party has been out of power since 2006 and out of Parliament since 2014. However, the BNP and its allies simply don't have the organisational wherewithal to mobilise the masses in protests. This is something the Hasina government knows too well. Still, huge disenchantment within the Opposition parties may force their cadres to adopt desperate measures, raising the possibility of protests turning violent. Moreover, given the uneasy state of affairs, neither the emboldened ruling party nor the enfeebled Opposition alliance seems ready to reconcile.

However, any contemptuous attitude towards the Opposition leaders and repressive measures towards their legitimate demands would be tantamount to the removal of the last vestige of justice and democracy from a country whose founding was meant to symbolise these very virtues.

India would do well to advise Hasina that her response should not lead to a situation where the Bangladeshi people start losing faith in democracy. Winner-takes-all politics would only undermine her great achievements on the development and education fronts, while overshadowing the successes her government has achieved in reducing poverty. Although the BNP in recent years has attempted to remove India's misgivings, the return to power of the BNP would have been a matter of concern for New Delhi as the party has often been sympathetic to Islamist extremist elements and anti-India groups.

One cannot forget so easily that Bangladesh's relations with India had reached their lowest point during the BNP's rule when the Jamaat-e-Islami (JeI) was a coalition partner in the government. A majority of Bangladeshis were not happy when the war criminals of the 1971 genocide were enjoying power. It was this popular sentiment against collaborators that led people to support the War Crimes Tribunal and the execution of many JeI leaders. There are several media reports of Pakistan's ISI having increased points of contact with its political allies in Bangladesh just before the recent elections, and also some reports of BNP leaders having sought Chinese intervention in the elections through the ISI.

India and Bangladesh have improved relations in recent years to the extent that Dhaka may well be projected as New Delhi's closest regional partner. Bangladesh is critical as far as India's security as well as 'Act East' policy is concerned. Various militant groups active in India's North East used to exploit the porous India-Bangladesh border and take shelter in Bangladesh. But the Hasina government has ensured that these militant groups are denied any safe haven in Bangladesh, which has led to more trust between New Delhi and Dhaka. Thus, the outcome in favour of Awami League has undeniably been a matter of great satisfaction for New Delhi.

According to India's Ministry of External Affairs, Modi's conversation with Hasina was very cordial during which the Indian prime minister "reiterated the priority India attaches to Bangladesh as a neighbour, a close partner for regional development, security and cooperation, and a central pillar in India's 'Neighbourhood First' policy". India-Bangladesh relations are likely to improve further due to policy continuity that the Hasina government will ensure.

The success of sub-regional groupings like BIMSTEC (Bay of Bengal Initiative for Multi-Sectoral Technical and Economic Cooperation) and the BBIN (Bangladesh, Bhutan, India, Nepal) Initiative greatly depends on Bangladesh's participation. Formed in 1997, BIMSTEC remained dormant till 2016 when the Modi government began to make a strong pitch for its revival. Not surprisingly, India has become a staunch promoter of BIMSTEC, particularly on issues of connectivity, people-to-people contact and increased regional investment. According to a reliable estimate, coastal shipping has the potential to make cargo movement between ports in India, Bangladesh, Myanmar and Thailand much cheaper than the present sea movement. 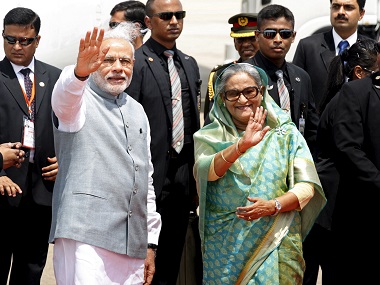 Dhaka's participation in these sub-regional groupings opens huge potential for Bangladeshi exports. A huge market in Bangladesh, which is set to emerge soon as a middle-income country, can be a bonanza for Indian investors. New Delhi has granted Dhaka the highest concessional Line of Credit almost amounting to $8 billion. Interestingly, a tripartite MoU for cooperation in the construction of the Rooppur Nuclear Power Plant has been signed between India, Bangladesh and Russia.

Although New Delhi has liberalised the visa regime for Bangladeshi tourists visiting India, more steps need to be taken to enhance people-to-people contact. Fulfilment of various promises made to Bangladesh should be New Delhi’s priority. The Teesta water-sharing deserves attention of Indian policymakers as its finalisation would earn more goodwill for India in Bangladesh.

However, India's room to manoeuver is not unlimited, despite what many in New Delhi would like to believe. China has been expanding its reach in Bangladesh that continues to witness a phenomenal surge in Chinese investments in all sectors of economy. Although Hasina has always given extraordinary significance in forging a strong and robust partnership with India, she has been extremely careful to maintain good relations with China as well. For Dhaka, economic and military aid from Beijing is indispensable for Bangladesh's infrastructural development and for meeting its defense requirements respectively.

Hasina will continue to balance Bangladesh's relations with India and China. It remains to be seen how China allays India's apprehensions due to its growing footprint in Bangladesh. If India, Bangladesh and China agree on how to achieve regional cooperation, it will also help advance the so-called 'Wuhan' consensus.

Bangladesh continues to be the brightest spot for the Modi government's neighbourhood policy despite attempts by pro-Pakistan jihadist groups and the ISI-sponsored elements to derail flourishing bilateral ties. While India enjoys immense goodwill in Bangladesh due to its role in its creation, theirs is a complex relationship due to salience of the issue of illegal migration in India's domestic political debates. It is therefore imperative for the Modi government that this sensitive issue is not exploited for short-term electoral gains during the forthcoming parliamentary elections. Moreover, India’s Act East policy presupposes a stable, secular and friendly Bangladesh which will play a key role in the development of India's North East.