Despite change at the White House, U.S. allies will remain wary after Trump

By Matt Spetalnick and Michelle Nichols WASHINGTON/NEW YORK (Reuters) - Seated in front of photographers in the Oval Office in 2017, German Chancellor Angela Merkel leaned toward U.S. President Donald Trump during their first meeting: 'They want (us) to have a handshake.' But Trump ignored her and Merkel was unable to hide a look of incredulity as she turned to face the cameras. Trump's treatment of traditional U.S. 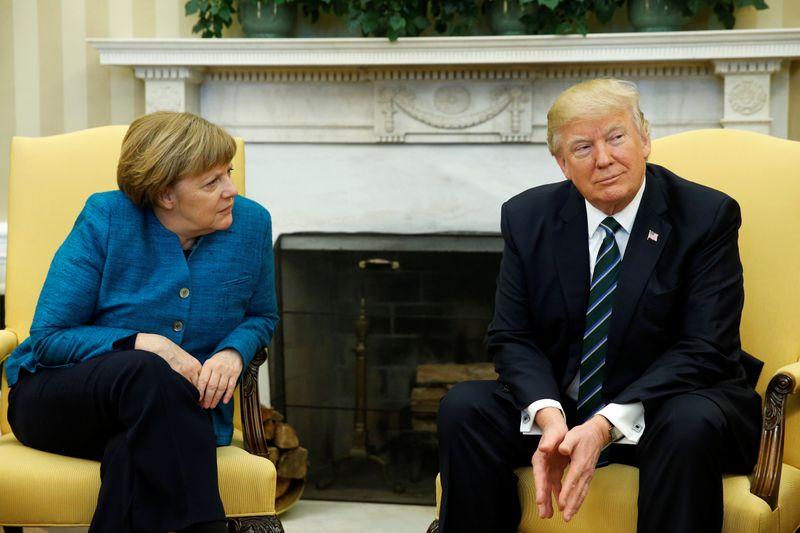 By Matt Spetalnick and Michelle Nichols

WASHINGTON/NEW YORK (Reuters) - Seated in front of photographers in the Oval Office in 2017, German Chancellor Angela Merkel leaned toward U.S. President Donald Trump during their first meeting: "They want (us) to have a handshake." But Trump ignored her and Merkel was unable to hide a look of incredulity as she turned to face the cameras.

Trump's treatment of traditional U.S. allies, on a personal and policy level, has left presumed President-elect Joe Biden with shell-shocked American friends likely forever wary of Washington's credibility - no matter who resides in the White House, say some diplomats and analysts.

"The transatlantic relationship has never been this bad. The trust between the U.S. and Europe is not there anymore," said a senior European diplomat, speaking on condition of anonymity. "It can be repaired, but ... I'm not sure it will be the same."

Biden, who was vice president under Trump's predecessor Barack Obama, pledged before the Nov. 3 election to stand up for U.S. allies and "make it clear to our adversaries the days of cozying up to dictators are over," referring to Trump's friendliness with North Korean leader Kim Jong Un and Russian President Vladimir Putin.

"You just can't reset to four years ago. In particular in both Europe and Asia, how we are smarter about rebuilding alliances to deal with the threats from China and Russia is going to be a major challenge for Biden," said Michael McFaul, former U.S. ambassador to Russia under Obama and now a senior fellow at Stanford University's Hoover Institution think tank.

Biden has promised to hold a global "Summit for Democracy" to fight corruption, defend against authoritarianism, and advance human rights. Though there may have been a collective sense of relief among U.S. allies after his narrow election victory, he has acknowledged that "picking up the pieces will be an enormous task" after Trump.

"Memories of Trump will remain and create a certain degree of background anxiety in what future U.S. presidents might do," said Michael O'Hanlon, of the Brookings Institution think tank in Washington, describing it as an "alliance PTSD."

U.S. friends and partners are also mindful that once Biden take office on Jan. 20, he is expected to focus heavily on twin domestic challenges of fighting the coronavirus pandemic and the U.S. economic crisis caused by it.

Trump championed an "America First" policy and while he said that didn't mean "America alone" there were several occasions where his administration was isolated, including on votes in the 15-member United Nations Security Council.

The United States split with allies over Trump's decisions to move the U.S. embassy in Israel to Jerusalem, leave the Iran nuclear deal, quit a global climate accord, challenge sexual and reproductive health and rights for women and leave the U.N. Human Rights Council and the World Health Organization.

Biden had vowed to rejoin the nuclear deal if Iran returns to compliance, return to the climate accord, abandon plans to leave the WHO and end a U.S. rule that bans funding of aid groups that discuss abortion.

"Now in Europe, leaders and people have realized that you conclude agreements with the U.S. and four years later, the following administration throws the agreements in the garbage," the senior European diplomat said. "So there is a question of credibility and reliability of the U.S."

A senior Trump administration official said it was unfair to conclude that the "America First" approach had hurt Washington's key alliances, insisting that Trump had just taken a tougher stance than Obama that had made relationships stronger and that most key allies had grown accustomed to his abrasive style.

A central issue for Trump has been NATO. He has pushed members, particularly Germany, to spend more and eroded faith in a pillar of post-war European security - that U.S. forces would defend members against any Russian aggression.

"Such points of contention do not explain why the U.S. administration has shown contempt for and sought to humiliate an erstwhile close ally," former German ambassador to Washington, Peter Wittig, wrote in Foreign Affairs magazine last month. "The house of the West has lost its guardian."

Biden wrote in the same magazine earlier this year that his foreign policy would "place the United States back at the head of the table" because "the world does not organize itself."

The United States' northern neighbor and ally Canada, has also had a rocky relationship with Trump. Roland Paris, Canadian Prime Minister Justin Trudeau's former foreign policy adviser, said if Biden made an unequivocal commitment to NATO it would help salvage some of the bad feelings.

"And in turning to allies to develop a more common approach to the challenges posed by China and Russia could also help to rebuild some of the trust that was lost during the Trump years," he told Reuters.

Biden has described U.S. commitment to NATO as "sacred."

In Asia, South Korea endured Trump questioning the value of their alliance and demanding Seoul pay more for U.S. troops stationed there. South Korean officials and analysts expect a change of tone, particularly on one of the world's top issues - North Korea.

While Trump and North Korean leader Kim met three times, no progress was made toward Pyongyang giving up its nuclear weapons. In contrast, Biden has vowed "a sustained, coordinated campaign with our allies and others, including China," a Pyongyang ally, to push for denuclearization.

However, Biden can be expected to continue at least one of Trump's policies - an effort that in the past two months has secured agreements by three Arab states, the United Arab Emirates, Bahrain and Sudan, to start normalizing relations with U.S. ally Israel.

It is widely seen as one of Trump's few foreign policy successes, though Biden has made clear he will do more to restart talks between Israel and the Palestinians, who consider the moves by their Arab brethren a betrayal of their cause for statehood.

Despite a new U.S. administration, Michael Kergin, a former Canadian ambassador to Washington, said traditional allies would remain wary of the United States.

"Publicly there will be a lot of positive things said," Kergin said. "But from a strategic calculus, countries have already started to look around at alternatives and will weigh (matters) very carefully as they go forward in their relationship with the United States."