By Lefteris Papadimas LESBOS, Greece (Reuters) - Despairing migrants left without shelter on the island of Lesbos after a fire destroyed Greece's biggest refugee camp faced off against police on Friday as authorities began setting up hundreds of tents to try to contain the crisis. With more than 12,000 former occupants of the overcrowded Moria reception centre now camping out in fields and along roadsides without food or water and threatened by a possible spread of coronavirus infections, the need for a solution has become increasingly urgent 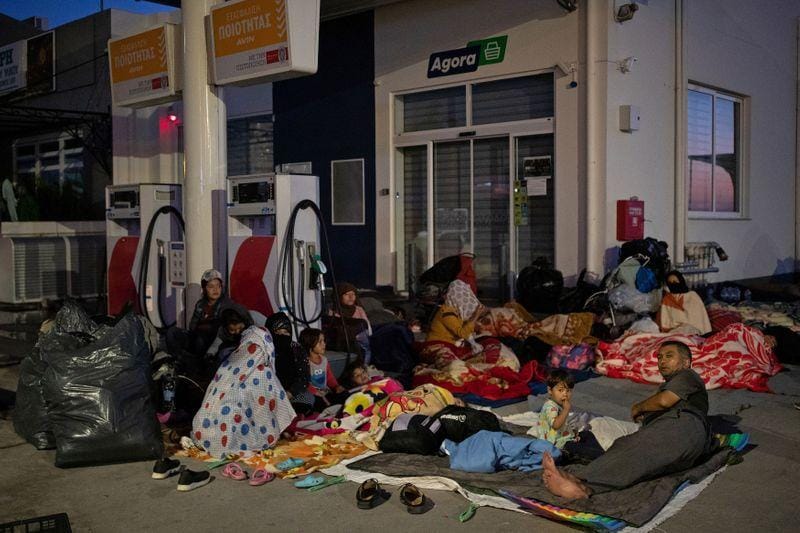 LESBOS, Greece (Reuters) - Despairing migrants left without shelter on the island of Lesbos after a fire destroyed Greece's biggest refugee camp faced off against police on Friday as authorities began setting up hundreds of tents to try to contain the crisis.

With more than 12,000 former occupants of the overcrowded Moria reception centre now camping out in fields and along roadsides without food or water and threatened by a possible spread of coronavirus infections, the need for a solution has become increasingly urgent.

But the Greek government has been forced to tread warily due to growing anger among residents of an island whose location a few miles off the Turkish coast has kept them on the frontline of Europe's migrant crisis for years.

"Moria is a monstrosity," Dimitris Koursoubas, a senior official responsible for migration in the northern Aegean islands, said, saying the fire which destroyed the camp on Wednesday presented a "tragic opportunity" to find a solution.

"We want all the migrants out, for national reasons. Moria is over," he said.

The migrants, most from Africa, Syria or Afghanistan, have been desperate to get off the island and a group of several hundred gathered a few miles outside the main port of Mytilene, near a supermarket where helicopters landed tents and supplies.

Shouting "Freedom!" and "No police!" and waving handmade signs reading "No new camp", or "Please Help Us!" they faced off against police who blocked them going down the road into town.

Greek officials say they believe the fire in the Moria centre was lit deliberately by migrants reacting to quarantine measures after COVID-19 was detected in the camp last week.

The emergency has once again highlighted Europe's patchy response to a multi-year crisis that has seen more than a million migrants reach its shores, often on board flimsy vessels and fleeing wars and poverty in the Middle East and beyond.

"The clock has run out on how long Europe can be without a migration policy. Now is the time to change this," Margaritis Schinas, the European commissioner responsible for migration and asylum policy, said at a news conference in Berlin.

Mediterranean countries such as Greece and Italy, where most migrant boats arrive, have long demanded that other EU states take in more asylum seekers, but Hungary and Poland, among others, have refused to share the burden.

German Interior Minister Horst Seehofer, speaking alongside Schinas, said France and Germany had agreed to take in most of around 400 minors who have been moved from Lesbos to the Greek mainland.

But there has been no wider agreement on resettlement and Greek authorities have refused any mass transfers off Lesbos.

For the migrants seeking shade from the blazing late summer heat, many of whom lost whatever possessions they had in the blaze, the outlook is bleak.

"I want somebody to help us because this is too much, you know, I wake up in the morning, I think things will change but nothing changes," said Pamela, a Congolese woman who escaped the fire with just her children and has since slept in the open.

"All my things are gone, I don't have anything, no clothes, like nothing."

The World Health Organization said it was sending two emergency medical teams. Officials also said 200,000 rapid COVID-19 tests had been brought to the island to handle a possible upsurge in cases.

In the chaos following the blaze, authorities have lost track of at least 35 people who had tested positive.