Deployment of second Ebola vaccine would not be quick fix, experts warn

By Fiston Mahamba, Kate Kelland and Aaron Ross GOMA, Democratic Republic of Congo (Reuters) - The resignation of Congo's health minister in the midst of the country's worst Ebola outbreak could clear the way for a second experimental vaccine to be deployed. But the new shot would likely take months to win the trust of frightened locals and show results, health officials say 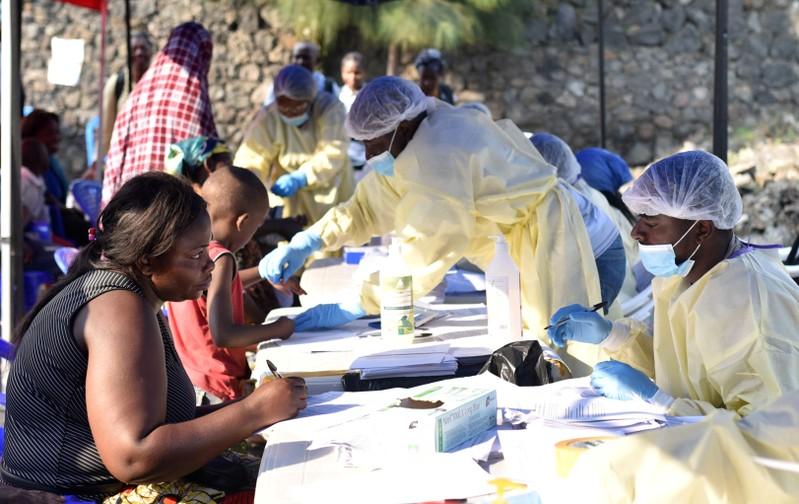 GOMA, Democratic Republic of Congo (Reuters) - The resignation of Congo's health minister in the midst of the country's worst Ebola outbreak could clear the way for a second experimental vaccine to be deployed. But the new shot would likely take months to win the trust of frightened locals and show results, health officials say.

The World Health Organization recommended the two-dose shot to complement a vaccine by U.S. drugmaker Merck

Proponents, including medical charity Medecins Sans Frontieres (Doctors Without Borders) and the Wellcome Trust, said the new vaccine could be deployed to areas not yet affected by Ebola to create a firewall against the virus, which the WHO declared an international health emergency last week.

But Ilunga said the J&J vaccine had not been proven effective and could confuse people in eastern Democratic Republic of Congo, where wild rumours are hampering the response.

"Congolese have the right to have the gold standard, the best vaccine," he told Reuters on Thursday, in his first public comments since resigning. "They don't need to be the subject of experimentation."

"You can't have a group of promoters, producers of the vaccine (and) university researchers wanting to introduce the vaccine without contacting the health authorities," he said, without elaborating further.

Paul Stoffels, J&J's chief scientific officer, denied there were any efforts to secretly introduce the vaccine and said the company had been in full communication with Congolese authorities.

But scepticism about new medicines can resonate strongly on a continent where some pharmaceutical trials have faced accusations in the past of failing to obtain informed consent and providing subpar care to participants.

For example, some U.S. government-funded trials of HIV drugs in the 1990s were accused of double standards for giving placebos to women in Africa when effective therapies existed, a practice that is not generally allowed in the United States and other Western nations on ethical grounds. Researchers defended the use of placebos as scientifically necessary.

Jean-Jacques Muyembe, an epidemiologist and Ebola expert named to lead Congo's response team, dismissed Ilunga's concerns and said authorities would revisit whether to deploy a second vaccine. However, he downplayed the importance of the decision.

"I don't think that a vaccine is what's holding back the response," he told Reuters, noting that previous Ebola outbreaks had been contained quickly without a vaccine.

"We could use or not use. It won't change the evolution of the epidemic," he said.

The nearly year-long outbreak has infected more than 2,500 people and killed more than 1,700, numbers topped only by a 2014-16 outbreak in West Africa that killed more than 11,300. This month, a case was detected in Goma, a city of 2 million on the border with Rwanda, heightening fears about the spread of the haemorrhagic fever.

Efforts to contain it have been undermined by mistrust of health workers and violence by armed militias. Treatment centres have been attacked.

Local campaigners say people are scared and confused about the various medicines being used. In addition to the vaccine, four experimental treatments are being given to Ebola patients.

All are still unlicensed, which means they can only be used in clinical trials overseen by Congo's health ministry.

"We should not introduce a second vaccine when we don't yet have scientifically-proven conclusions from the one currently being tested," said Matina Mwanack, the administrator of an advocacy group in the eastern Congo city of Butembo called Families United Against Ebola.

"(We) have suffered a lot from the lack of needed information about the vaccines and treatments being tested."

Omar Kavota, who heads a group of religious and political leaders in eastern Congo, said "introducing a second vaccine would amplify rumours", including over why some patients got one while others received the second.

Muyembe said communicators had been appointed to make the process more transparent.

Proponents of a second vaccine argue it can only be tested in a live outbreak, since it would be unethical to deliberately infect trial volunteers. They propose deploying it where the disease has not yet spread, while the Merck vaccine continues to be used to protect contacts of suspected cases.

"Both vaccines should work hand in hand," said Peter Piot, director of the London School of Hygiene and Tropical Medicine and one of the scientists who first discovered the Ebola virus.

Since the West African outbreak, J&J has tested its vaccine on more than 6,000 volunteers in a dozen trials, confirming its safety and ability to generate an immune response.

It requires two injections 56 days apart - another obstacle cited by Ilunga - in an area where fighting causes frequent displacement, but should last longer.

"The goal is to give a long-term safe profile for people who may never be exposed to Ebola," said J&J's Stoffels, adding that 1.5 million doses were available.

Josie Golding, head of epidemics at the Wellcome Trust, said "we could run out of Merck vaccines" if the outbreak extends into a second year. Health authorities have already begun using smaller doses to ration supplies.

Congo's health ministry disputes there is a shortage of the Merck vaccine. The company said it expects to have about 900,000 doses available over the next six to 18 months, in addition to the 195,000 doses it has already donated.

The ministry has also considered potential vaccines developed by China's CanSino Biologics <6185.HK> and the Russian research institutes Rospotrebnadzor and Gamaleya, but those discussions are less advanced.

(Mahamba reported from Goma, Kelland from London and Ross from Dakar; Additional reporting by Stanis Bujakera in Kinshasa and Manas Mishra in New York; Editing by Tim Cocks, Alexandra Zavis and Giles Elgood)