By David Morgan and Richard Cowan WASHINGTON (Reuters) - Democrats on Wednesday aimed to show how Donald Trump laid the groundwork for the deadly attack on the U.S. Capitol by falsely claiming the election was stolen as they opened their case charging the former president with inciting insurrection. 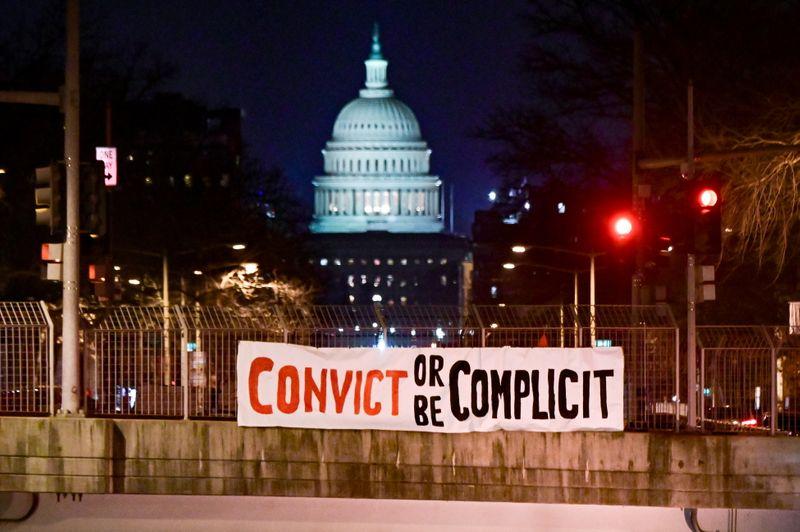 WASHINGTON (Reuters) - Democrats on Wednesday aimed to show how Donald Trump laid the groundwork for the deadly attack on the U.S. Capitol by falsely claiming the election was stolen as they opened their case charging the former president with inciting insurrection.

House of Representatives managers prosecuting the case, an uphill task in a divided Senate, will show never-before-seen footage in an attempt to get Republicans in the chamber to confront the mayhem and danger they all faced on Jan. 6, senior aides said.

"We will be using footage never seen before that shows a view of the Capitol that is quite extraordinary and a view of the attack that has never been public before," one aide said.

The House has charged Trump, a Republican, with inciting an insurrection by exhorting thousands of supporters to march on the Capitol, where Congress was gathered to certify Democrat Joe Biden's electoral victory.

In an assault that stunned the world, the rioters stormed the Capitol, sending lawmakers into hiding and leaving five people dead, including a police officer.

Democrats on Tuesday showed a graphic video presentation of the siege, only to find some Republican senators looking down or fixated on papers at their desks as audio of the mob’s screams and shouts echoed through the chamber. Senators from both parties act as a jury in a U.S. presidential impeachment trial.

Trump had made multiple false assertions that he lost the election only because of widespread fraud.

"You're going to hear the provocation. You are going to hear how Trump inflamed his base leading up to it with his lies about the election being stolen; how they have to 'stop the steal.' He wanted a landslide," the senior aide said in a briefing before the trial resumed at noon EST (1700 GMT). "Jan. 6 was the culmination of his conduct not a beginning of it."

On Tuesday, the Senate voted that the trial could move ahead even though Trump's term ended on Jan. 20. Six out of 50 Republican senators broke with their caucus to side with Democrats.

Tuesday's vote shows Democrats face long odds to secure a conviction that would bar Trump from seeking public office again. A two-thirds majority in the Senate must vote to convict, which means at least 17 Republicans would have to defy Trump's still-potent popularity among Republican voters.

The nine Democratic House members acting as Trump's prosecutors accuse him of encouraging his backers to block the peaceful transfer of power, a hallmark of American democracy.

Trump's behavior "could have easily disrupted the transfer of power in the United States" for the first time in its history, U.S. Representative Jamie Raskin said as he opened the proceedings on Wednesday, calling the trial "a moment of truth for America."

Prosecutors in one Georgia county are investigating Trump's attempts to overturn the state's election results, according to a letter seen by Reuters. On Monday, the office of Georgia's Republican Secretary of State Brad Raffensperger opened its own probe into a call made by Trump on Jan. 2 pressuring him to "find" more votes.

Trump's lawyers argue that the former president's rhetoric is protected by the First Amendment's guarantee of free speech and that the individuals who breached the Capitol, not Trump, were responsible for their own criminal behavior. They also say the trial is only aimed at ending Trump's political career.

"We are really here because the majority in the House of Representatives does not want to face Donald Trump as a political rival in the future," Bruce Castor, one of Trump's lawyers, told senators on Tuesday.

Party leaders have agreed on a fast-moving schedule that could lead to a vote on conviction or acquittal by early next week. It was still not clear whether either side would present witnesses.

Democratic Senator Richard Durbin told CNN on Wednesday: "We have plenty of witnesses. We have 100 witnesses sitting in the chairs and the senators."

Some Democrats had expressed concern that a prolonged trial could delay progress on Biden's agenda, including a proposed $1.9 trillion coronavirus relief package.

Biden was not planning to watch the trial, the White House said, and spent Tuesday meeting business leaders in the Oval Office. Asked about the proceedings, the president said he was focused on his own job.

"The Senate has their job; they're about to begin it. I'm sure they're going to conduct themselves well," he said.

Trump is the first U.S. president to be impeached twice. His first impeachment trial, which stemmed from his efforts to pressure Ukraine to investigate Biden, ended in an acquittal a year ago in what was then a Republican-controlled Senate.

No U.S. president has ever been removed from office via impeachment. Bill Clinton was impeached in 1998 and Andrew Johnson in 1868 but they also were acquitted. Richard Nixon resigned in 1974 rather than face impeachment over the Watergate scandal.