Deforestation in Brazil's Amazon lessens in August but remains high

By Jake Spring BRASILIA (Reuters) - Deforestation in Brazil's Amazon rainforest fell in August, from the same month a year ago, preliminary government data showed on Friday, even as fires in the region are worsening. Roughly 1,359 square kilometers (525 square miles) of jungle were cleared in August, an area larger than Los Angeles, according to space research agency Inpe. 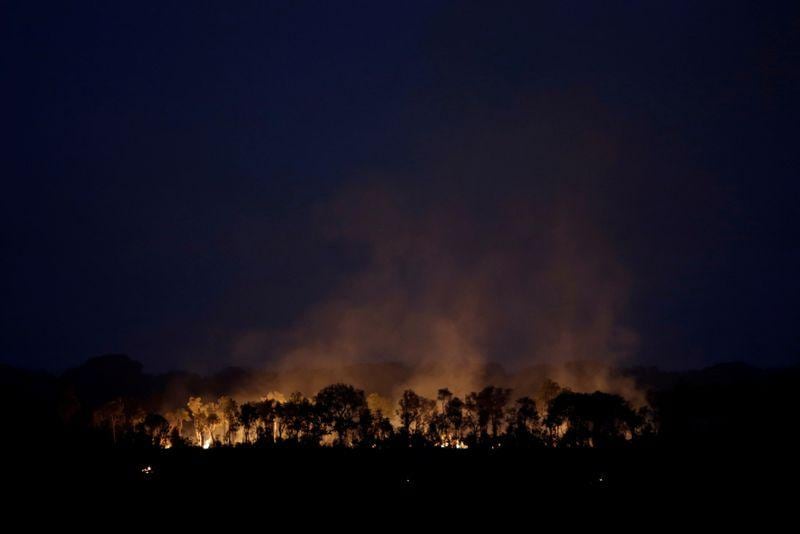 BRASILIA (Reuters) - Deforestation in Brazil's Amazon rainforest fell in August, from the same month a year ago, preliminary government data showed on Friday, even as fires in the region are worsening.

Roughly 1,359 square kilometers (525 square miles) of jungle were cleared in August, an area larger than Los Angeles, according to space research agency Inpe. That is the fifth highest month on record, though 21% lower than August 2019.

In the first eight months of the year, deforestation dropped 5% from the same period last year, to about 6,100 square kilometers.

While monthly deforestation eases from a record peak last year, environmentalists, scientists and international investors say the destruction remains out of control.

The asset management wing of Nordea, one of the Nordic's largest banks, said the continued destruction calls into question whether the trade deal between the European Union and South American trade bloc Mercosur should go forward.

The deal, pending ratification, is seen as a boon for Brazilian agricultural exports, but European politicians have raised concerns that it could boost environmental destruction.

"The level of deforestation is still much too high," said Eric Pedersen, head of responsible investments at Nordea Asset Management, which manages 223 billion euros in assets.

"The issue is now whether there is still time to show sufficient improvement for the EU-Mercosur agreement to be ratified as planned. The indications we are getting is that this really is an open question right now."

Environmental advocates and scientists blame the policies of right-wing President Jair Bolsonaro for soaring deforestation, with the five highest months on record for deforestation all occurring since he took office in January 2019. They say Bolsonaro has rolled back environmental protections and called for development of the Amazon, emboldening illegal loggers and land squatters to destroy the forest.

Bolsonaro defends his policies, saying development will raise the region out of poverty. He has authorized the military to combat deforestation and forest fires from May to November this year.

Meanwhile, fires in the Amazon in the first 10 days of September are up 85% compared with the same period last year, according to Inpe data.

Deforestation and forest fires this year have emitted 226 million tonnes of carbon dioxide, equivalent to annual emissions of 48.8 million cars, according to a calculation by IPAM and U.S.-based Woodwell Climate Research Center.