Prague: Voters flocked to polling stations on Saturday, the second and final day of a Czech general election expected to sweep into power a billionaire populist dubbed the "Czech Trump" and boost anti-European Union parties.

Betting on his anti-euro, anti-migrant and anti-corruption ticket, ANO (Yes) movement chief Andrej Babis, topped opinion polls by a wide margin ahead of the ballot which ends on Saturday afternoon. 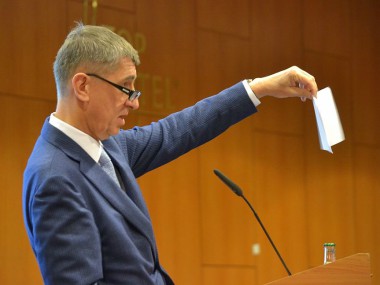 "I think his policy is for the people," pensioner Alena Kolarova told AFP in Prague after voting, praising Babis for "restoring order in public finances and tax collection" during his three-year stint as finance minister that ended in May.

Babis said he expected his EU country of 10.8 million people to "enter a new stage" after voting on Friday, adding it needed "a government which will really tackle people's problems."

Far-right and far-left anti-EU parties are eyeing strong gains which could lead to a fragmented parliament with up to nine parties and few natural coalition allies.

Analysts warn of instability and that the Czech Republic's system of liberal democracy could be disturbed.

ANO has already held key posts in the outgoing rocky centre-left coalition under Social Democrat prime minister Bohuslav Sobotka, with Babis serving as finance minister from 2014 to May this year.

A 63-year-old Slovak-born chemicals, food and media tycoon, Babis captured around 25-30 percent support in recent surveys, putting ANO ahead of its current coalition partner, the left-wing Social Democrats, who have just 12.5 percent.

Parties protesting against liberal democracy are poised to win a majority in parliament for the first time since communism fell in 1989, the leading Hospodarske Noviny daily said in a Friday editorial.

"And for the first time we face the threat that an openly xenophobic, extremist movement will earn more than 10 percent" of the vote, it added, pointing to the far-right anti-EU Freedom and Free Democracy (SPD) of Tokyo-born entrepreneur Tomio Okamura who won backing from France's far-right National Front.

The daily called the elections a "turning point... both for the country's internal functioning and its anchoring in the European Union."

Despite their country's economic success, many Czechs who are heavily in debt or working long hours for low wages feel they have been left behind and are turning to anti-system parties to vent their frustration, Hospodarske Noviny added.

With joblessness at 3.8 percent in September, the Czech economy which is heavily reliant on car exports is slated to grow by 3.6 percent this year.

While Babis has vowed to steer clear of the eurozone and echoes other eastern EU leaders who accuse Brussels of attempting to limit national sovereignty by imposing rules like migrant quotas, he favours a united Europe and balks at talk of a "Czexit".

Babis's main rival, Social Democrats leader and Foreign Minister Lubomir Zaoralek, said Friday he hoped that the future government would ensure that the Czech Republic does not drift to the EU's periphery.

Opinion surveys showed the anti-EU Communists could win 10.5 percent, ahead of Okamura's SPD with 9.5 percent and the anti-establishment Pirates party with 8.5 percent.

The leader of France's far-right National Front Marine Le Pen sent Okamura a letter of support, saying that their parties want to create "a Europe of nations and liberties."

On Saturday, voting for the 200-member lower house of parliament began at 6 am GMT and ends at 12 pm GMT, with no exit polls scheduled and results expected in the evening.

Officials pegged voter turnout at over 40 percent on Friday.