MADRID (Reuters) - Authorities on the Spanish island of Mallorca ordered the closure of three popular party streets on Wednesday in a bid to prevent drunken tourists from flouting coronavirus restrictions and risking a fresh outbreak. 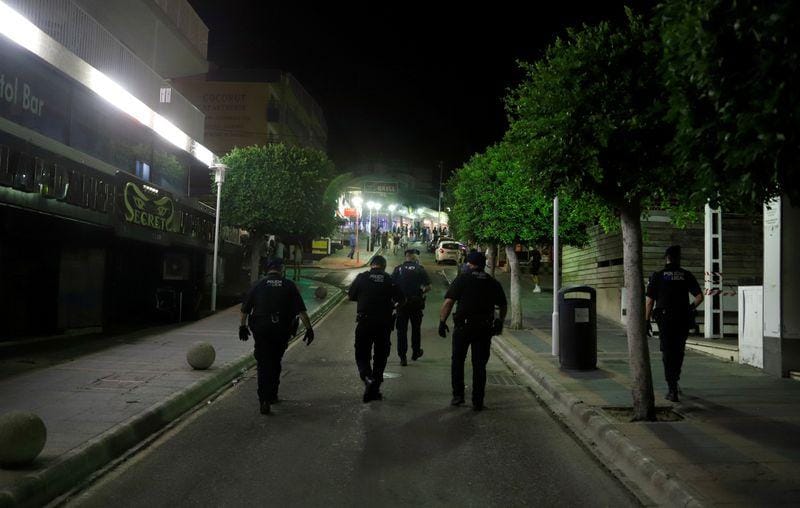 MADRID (Reuters) - Authorities on the Spanish island of Mallorca ordered the closure of three popular party streets on Wednesday in a bid to prevent drunken tourists from flouting coronavirus restrictions and risking a fresh outbreak.

The move comes after several widely circulated videos showed German and British tourists partying in packed bars without face masks and, in one case, jumping up and down on a parked car.

"The objective is to prevent antisocial behaviour which could jeopardise what has been achieved in terms of a safe restart for the tourism sector," the Balearic Islands' regional government said in a statement.

Shops, bars and restaurants on Punta Ballena street in the resort of Magaluf, notorious for attracting young, rowdy Britons, will be closed for an undetermined period of time.

Attracting nearly 14 million visitors in 2019, the Balearic Islands are one of Spain's most popular tourist draws.

Since European borders were reopened in July, the regional government has sought to market the islands as a safe destination, particularly to the German and British tourists who make up the bulk of its visitors.

Last week it became the second Spanish region to make face masks compulsory even when social distance can be guaranteed.

But in Germany, the videos of loutish behaviour raised concerns that holidaymakers were risking infection, which could then be imported back home.

German Health Minister Jens Spahn warned on Monday that the risk of a second wave of coronavirus infections was still real and that the population should not become overconfident.

Many of Germany's first coronavirus cases were among tourists who fell ill after visiting the Austrian ski resort of Ischgl, which marketed itself as the "Ibiza of the Alps".

In an interview with German daily Die Welt published on Wednesday, Karl Lauterbach, a Social Democrat lawmaker and professor of epidemiology, called for mandatory COVID-19 tests for holidaymakers returning from Mallorca to prevent the unnoticed spread of the coronavirus.

(Reporting by Nathan Allen in Madrid and Maria Sheahan in Berlin; Editing by Alison Williams)