Crackdown widens after call for new protests in Egypt 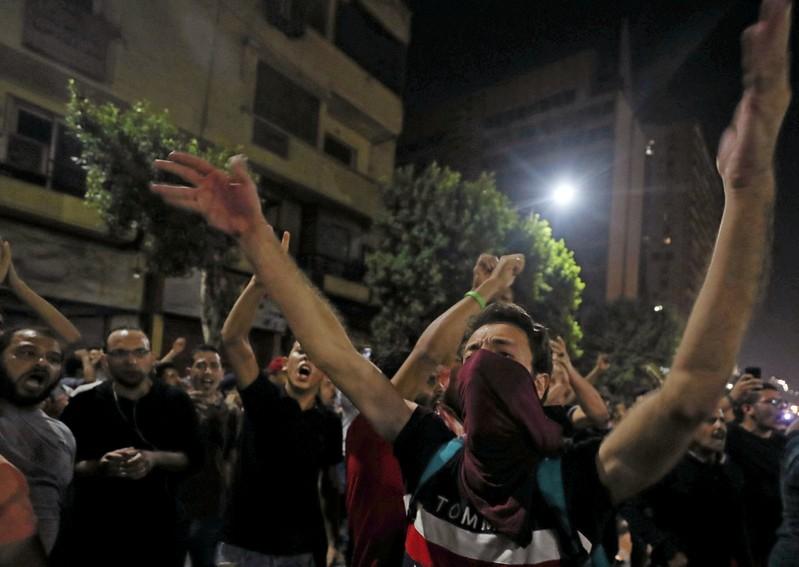 CAIRO (Reuters) - At least 1,900 people have been detained since protests against President Abdel Fattah al-Sisi began in Cairo and other Egyptian cities last Friday, the head of a rights monitoring group said on Thursday.

The public prosecutor’s office said in a statement issued late on Thursday that prosecutors "questioned a number that doesn't exceed one thousand suspects who participated in the demonstrations".

Gamal Eid, head of the Arab Network for Human Rights Information, said the arrests had been made between Friday and Wednesday and described them as part of the "most violent campaign in Egypt's (modern) history".

An interior ministry spokesman could not immediately be reached for comment.

Protesters chanting "Leave, Sisi" gathered in Cairo and other cities last Friday following online calls for demonstrations against alleged government corruption. The protests continued in the Red Sea city of Suez on Saturday.

The demonstrations took place in five governorates, the public prosecutor’s office said. Some of the detainees confessed to belonging to the outlawed Muslim Brotherhood, the office said in the first detailed official account of the protests.

Some foreigners were also detained, including a Palestinian who "confessed to belonging to the Palestinian Islamic Jihad movement" and a Dutch man who was caught with a drone equipped with a high-definition camera, the statement said.

There have been calls for new protests this Friday, though government supporters are also planning mass rallies to show their support for Sisi.

Security forces have stepped up their presence in main squares in major cities and have been checking mobile phones for political content.

The protests have unnerved investors and led to a pro-Sisi campaign in Egypt's strictly controlled media.

On Thursday the front page of private pro-government newspaper Al Dostour carried pictures of 33 opposition figures, activists, journalists and writers under the headline: "Beware of them."

Among them was Mohamed Ali, a former contractor and actor who posted a series of videos ahead of the protests from his home in Spain, accusing Sisi and the military of corruption. Sisi has dismissed the allegations as "lies and slander".

Sisi, who came to power after leading the overthrow of Islamist former President Mohamed Mursi, has overseen a broad crackdown on dissent that has extended to liberal as well as Islamist groups, and which rights groups say is the most severe in recent memory.

Sisi's backers say the crackdown was needed to stabilise Egypt after the turmoil that followed the country's 2011 uprising.

Authorities frequently link security threats to the Brotherhood, most of whose leadership has been jailed or fled abroad.