By Makini Brice WASHINGTON (Reuters) - (This version of the story corrects to show the judges did not say when they would rule in 22nd paragraph) U.S. President Donald Trump on Wednesday again threatened to close part of the southern border and send more 'armed soldiers' to defend it if Mexico did not block a new caravan of migrants travelling toward the United States. 'A very big Caravan of over 20,000 people started up through Mexico,' Trump wrote on Twitter. 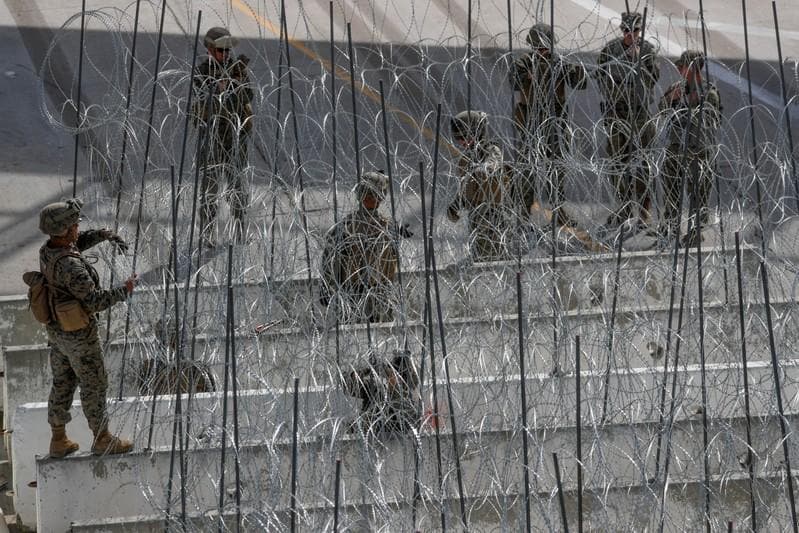 U.S. President Donald Trump on Wednesday again threatened to close part of the southern border and send more "armed soldiers" to defend it if Mexico did not block a new caravan of migrants travelling toward the United States.

"A very big Caravan of over 20,000 people started up through Mexico," Trump wrote on Twitter. "It has been reduced in size by Mexico but is still coming. Mexico must apprehend the remainder or we will be forced to close that section of the Border & call up the Military."

Trump also said, without offering details, that Mexican soldiers recently had "pulled guns" on U.S. troops in what he suggested was "a diversionary tactic for drug smugglers."

"Better not happen again! We are now sending ARMED SOLDIERS to the Border. Mexico is not doing nearly enough in apprehending & returning!" Trump tweeted.

It was not clear what Trump meant by "armed soldiers" since at least some of the troops on the border already are armed. It also was unclear what specific caravan Trump was alluding to.

U.S. officials, speaking on the condition of anonymity, said they are expecting a request from the Department of Homeland Security in the coming days for additional troops, although that number is expected to be in the low hundreds. About 5,000 active duty and National Guard troops already are at the border.

The U.S. Defence Department said earlier this month that six Mexican military personnel questioned two U.S. Army soldiers near Clint, Texas, about 30 miles (48 km) southeast of El Paso. The U.S. military said the Americans were in an unmarked car and an inquiry had found that they were in U.S. territory.

Newsweek magazine, citing the military report filed on the incident, said the U.S. soldiers were briefly held at gunpoint by the Mexicans, who took one American soldier's gun and put it in the car.

The two U.S. soldiers were travelling in an unmarked vehicle, according to a brief statement issued later on Wednesday by the Mexican foreign ministry, which added to the confusion.

Trump has made a tough stance on immigration a cornerstone of his presidency. He called the situation at the southern border a national emergency as a way to get money to build a border wall after Democrats in Congress thwarted traditional means of funding.

Officials arrested or denied entry to more than 100,000 people along the Mexican border in March, more than twice as many as during the same period last year, according to U.S. Customs and Border Protection.

In March, Trump threatened to close the border if the Mexican government did not immediately stem illegal migration, although later he praised Mexico for efforts to stop people from crossing illegally into the United States.

Mexico has returned 15,000 migrants in the past 30 days, a senior government official said on Tuesday, pointing to an uptick in deportations in the face of pressure from Trump to stem the flow of people north.

In San Francisco, three U.S. Court of Appeals judges heard arguments on whether to shut down the government's programme of sending immigrants back to Mexico to await their asylum proceedings rather than staying in the United States.

A lower-court judge ordered a halt to the programme on April 8 but the 9th U.S. Circuit Court of Appeals stayed that order and was considering whether to extend the stay or lift it during the appeals process.

Civil rights groups convinced the lower court that the programme, known as Migrant Protection Protocols, violated U.S. obligations not to send asylum seekers to a country where they face fears of persecution.

"How can you want to comply with this obligation if you don’t at least ask this person, 'Hey, by the way, before we send you to Mexico, do you have a fear of returning there?'" Judge Paul Watford asked a Department of Justice attorney.

The three judges did not say when they expected to rule.

The Trump administration says the policy is one way to reduce the number of asylum seekers being released into the United States for the months or years it can take their deportation cases to be decided.

The Trump Administration began the programme on Jan. 29 and since then 1,928 people, mostly from Central America, have been returned to Mexico to await asylum hearings.