(Corrects price paid by China Three Gorges for Brazil dams in paragraph 33 to 13.8 billion reais not 4.8 billion reais.) By Jake Spring BRASILIA (Reuters) - The Chinese government is trying to make peace with Brazil's leading presidential candidate, Jair Bolsonaro, whose China-bashing threatens to chill a profitable trading relationship that has benefited both countries. Chinese diplomats based in Brasilia have met twice with top Bolsonaro advisors in recent weeks, according to participants in the meetings. Their aim is to highlight cooperation with Latin America's largest country, whose grain and minerals have fuelled China's rise while lifting millions of Brazilians from poverty in the resulting commodities boom. 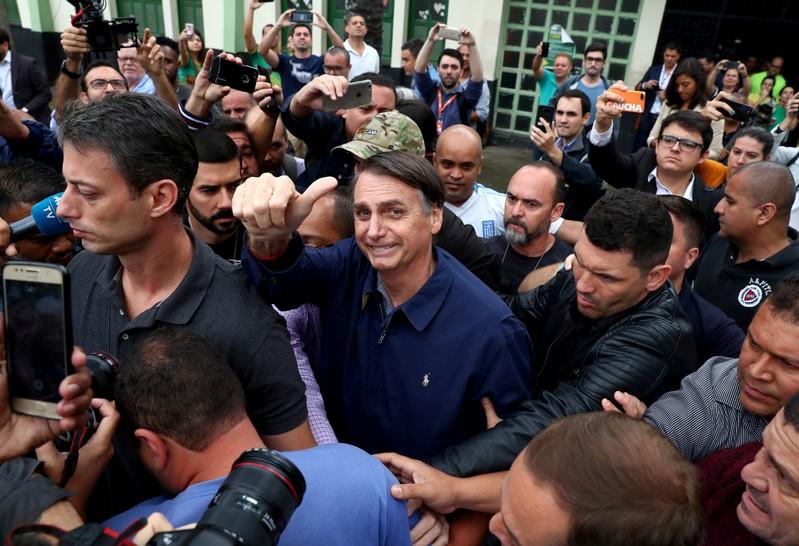 BRASILIA (Reuters) - The Chinese government is trying to make peace with Brazil's leading presidential candidate, Jair Bolsonaro, whose China-bashing threatens to chill a profitable trading relationship that has benefited both countries.

Chinese diplomats based in Brasilia have met twice with top Bolsonaro advisors in recent weeks, according to participants in the meetings. Their aim is to highlight cooperation with Latin America's largest country, whose grain and minerals have fuelled China's rise while lifting millions of Brazilians from poverty in the resulting commodities boom.

Bolsonaro has portrayed China, its largest trading partner, as a predator looking to dominate key sectors of its economy.

With its own economy slowing, China cannot afford to become embroiled in another costly trade war like that which has erupted between Beijing and Washington.

Two-way trade between China and Brazil stood at $75 billion last year, according to Brazilian government statistics. China has invested $124 billion in Brazil since 2003, mostly in the oil, mining and energy sectors. China is eager to bankroll railway, port and other infrastructure projects here to speed the movement of its Brazilian grain.

But the far-right Bolsonaro, much like U.S. President Donald Trump, has criticized China repeatedly on the campaign trail, saying the Chinese should not be allowed to own Brazilian land or control key industries. An ardent nationalist, Bolsonaro is expected to win a landslide victory in balloting this Sunday.

"The Chinese are not buying in Brazil. They are buying Brazil," Bolsonaro has warned repeatedly.

Companies in the crosshairs include China Molybdenum Co Ltd, which bought a $1.7 billion niobium mine in 2016 that Bolsonaro says Brazil should develop itself.

Niobium is used as an additive to steel to make it stronger and lighter. It is used in cars, buildings, jet engines and a host of other applications. Brazil controls about 85 percent of the world's supply and Bolsonaro wants his nation to reap the benefits.

Bolsonaro is also on record opposing a planned privatisation of some assets of state-owned utility Centrais Eletricas Brasileiras SA (Eletrobras) on concerns that Chinese buyers would win the bid.

Officials at China Molybdenum declined requests for comment. But six senior executives at Chinese companies operating in Brazil told Reuters they were watching Bolsonaro's remarks with varying degrees of concern.

"We are worrying a bit about some of his extreme views," one Chinese infrastructure executive told Reuters. "He is on guard against China."

Bolsonaro's friendly leanings toward Taiwan are likewise vexing to Beijing, which considers Taiwan a renegade province. Bolsonaro in February became the first Brazilian presidential candidate to visit Taiwan since Brazil recognised Beijing as the sole Chinese government under the One China policy in the 1970s.

The Chinese embassy in Brazil issued a letter condemning Bolsonaro's Taiwan trip as an "affront to the sovereignty and territorial integrity of China."

Bolsonaro's combative stance is in stark contrast to the rest of Latin America, whose leaders have welcomed Chinese investment, loans and commodities purchases.

And it could eventually put him at odds with Brazil's powerful farm and mining industries, for whom China is an indispensable customer.

Brazil's farm sector, meanwhile, has reaped the benefit of China's feud with Trump. Beijing has sharply reduced purchases of American soybeans, filling the gap with Brazilian grain. Brazilian exports of soy to China are up 22 percent by value this year with about 80 percent of its soy shipments now destined there.

The U.S.-China trade war has given Brazil leverage for now. But Jorge Arbache, former secretary for international affairs at Brazil's planning ministry, said Brazil would do well not to overplay its hand.

Brazil "does not have the luxury of giving up its biggest trade and investment partner," Arbache said. "There's not one economy in the world that can occupy the space China occupies."

The Chinese team portrayed their nation as a partner that does not compete with Brazil economically, according to Qu, who attended the meeting, and one other person familiar with the matter.

Guedes was offered a trip to China to strengthen his knowledge of the world's second-largest economy, Qu said. He said Chinese diplomats made it clear they would like to meet Bolsonaro in person, although no meeting has been set.

Lorenzoni said he met with two Chinese diplomats and that there would be further talks after the election. He said China is a vital partner and the two countries would maintain good relations.

If elected, Bolsonaro's first major meeting with the Chinese would come early in his presidency. Brazil hosts the BRICS summit in 2019, an event that Chinese President Xi Jinping is likely to attend.

Bolsonaro is content with China purchasing commodities. But the former Army captain is wary of the Asian nation's recent shopping spree in Brazil's energy and infrastructure sectors.

Brazil is now expected to put a number of government concessions and assets up for bid next year, including railways and state-held energy assets.

Bolsonaro has said he is against selling Eletrobras generation assets because it would "leave Brazil in Chinese hands."

The Chinese infrastructure executive said his company was worried that Bolsonaro might change the government auction rules to disadvantage Chinese bidders. He and other Chinese executives who spoke to Reuters declined to be identified.

To date, Bolsonaro has been vague about how he would carry out actions to stop Chinese investment he sees as undesirable. Brazil has no equivalent of the U.S. Committee on Foreign Investment, which reviews the national security implications of foreign investment in American companies.

Bolsonaro also needs to tread carefully with the huge agribusiness caucus that controls more than 40 percent of seats in Brazil's Congress.

The nation's farmers are overwhelmingly supportive of Bolsonaro, but have made clear that maintaining good relations with China, their largest export customer, is paramount.

"The economy is much more important than propaganda to get votes," said an executive at an agricultural company who declined to be identified. "You can't change it that easily without severe repercussions."