Coronavirus cases proliferate in more than a dozen U.S. states

By Maria Caspani and Anurag Maan (Reuters) - More than a dozen U.S. states have doubled their COVID-19 case loads in the last 14 days compared with the previous two-week period, as the pandemic spreads relentlessly across much of the country 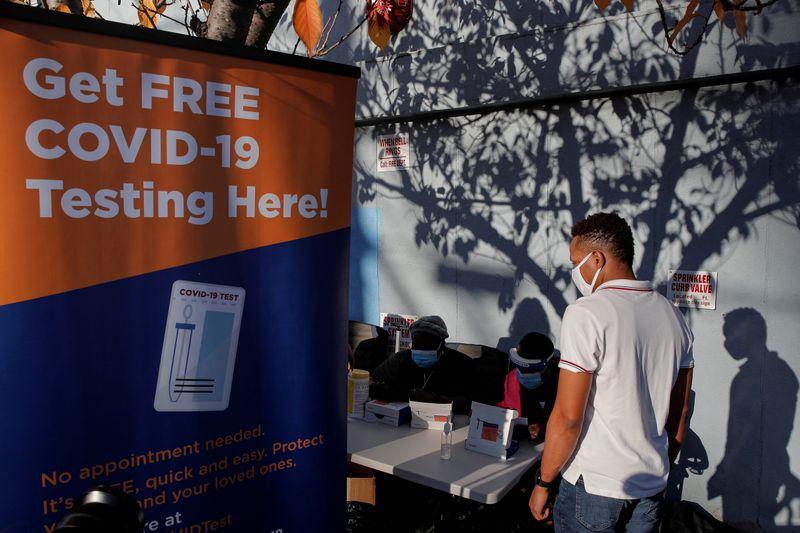 By Maria Caspani and Anurag Maan

(Reuters) - More than a dozen U.S. states have doubled their COVID-19 case loads in the last 14 days compared with the previous two-week period, as the pandemic spreads relentlessly across much of the country.

A Reuters tally showed coronavirus cases soared by more than 100% in 13 states in the past two weeks.

In the Midwest, Iowa was the worst affected state, followed by Minnesota, Michigan and Illinois.

Illinois has emerged as the pandemic's new epicenter in the region as well as across the country. In the past two weeks, the state reported about 130,000 cases, the highest in the country and more than hard-hit Texas and California.

Total COVID-19 cases across the United States hit an all-time daily high for a second day in a row on Wednesday at 142,279 and crossed the 100,000 mark for an eighth consecutive day, Reuters data showed.

The number of people hospitalized with the virus surged to at least 64,939 by late Wednesday, the highest ever for a single day during the pandemic, increasing by more than 41% in the past two weeks. The death toll rose by 1,464 to a total of 241,809.

Officials in several states including New York, California and hard-hit hot spots in the Midwest reimposed restrictions to try to stem the spread of infection as winter months loom and people gather indoors more, heightening the risk of contagion.

In Michigan, the Detroit public school system - the state's largest - announced on Thursday a temporary suspension of in-person education until Jan. 11.

The district said it will hold all classes online starting next Monday due to the rapid increase in the infection rate.

New York City Mayor Bill de Blasio said on Thursday that the country’s largest school system was preparing for a possible shutdown if the city’s rising infection rate hits a trigger point, but said a closure might still be averted.

“We’re not there yet, and let’s pray we don’t get there,” de Blasio told reporters. De Blasio has said schools will close if the percentage of city residents testing positive, now at a seven-day average of 2.6%, surpasses 3%.

Vaccine developers have offered some good news this week, with Pfizer

Health experts are hopeful that a vaccine might become available in the coming months for the most vulnerable populations and for healthcare providers.

But with a more lengthy timeline for the general public, many are urging strict adherence to well-known virus mitigation measures like wearing a face covering, washing hands and maintaining a safe social distance.

"We hope that by the time you get into the second quarter, end of April, early May, May-June - somewhere around that time, the ordinary citizen should be able to get it," Dr. Anthony Fauci, a top U.S. health official, told the ABC "Good Morning America" program on Thursday.

"What we need to do is what we've been talking about for some time now but really doubling down on it."