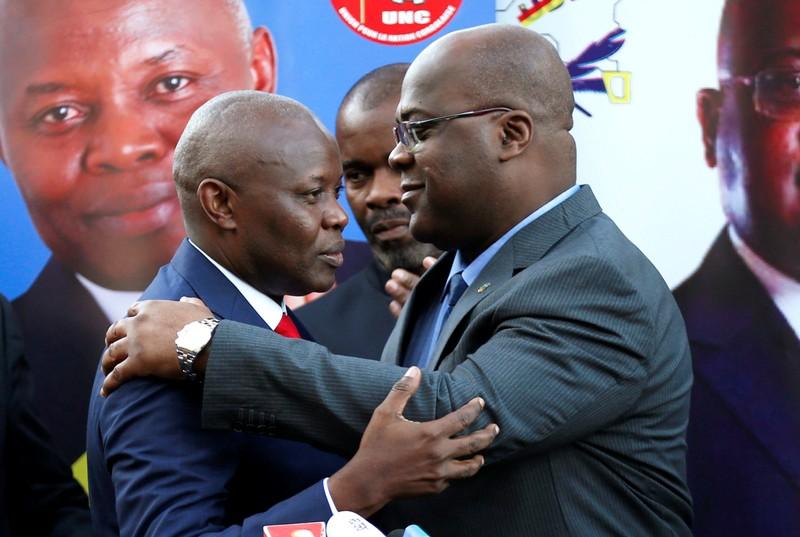 Tshisekedi, 55, the president of Congo's largest opposition party, the Union for Democracy and Social Progress, will stand against opposition leader and businessman Martin Fayulu and former interior minister Emmanuel Ramazani Shadary, who is backed by Kabila.

"I decide today to support Mr. Tshisekedi as the president of Congo," Kamerhe said at a joint news conference with Tshisekedi in Nairobi to cheers from supporters. "This is the winning ticket."

Tshisekedi and Kamerhe had agreed on Nov. 11 to support Fayulu in a rare moment of unity for Democratic Republic of Congo's splintered opposition, whose infighting in recent years has often played into the hands of Kabila.

That deal ended the next day after scores of Congolese opposition supporters demonstrated in the capital Kinshasa against the choice of former Exxon Mobil manager Fayulu.

An opinion poll in October showed opposition leaders were favoured by about 70 percent of voters but Fayulu trailed his rivals on eight percent.

Tshisekedi led with 36 percent ahead of Kamerhe (17 percent) and Shadary (16 percent).

Western governments and investors regard the election, which could lead to the Central African country's first ever democratic transfer of power, as crucial toward ending political instability that is impeding investment in Congo. The country of 80 million people is rich in natural resources but mired in humanitarian crises.

Kabila has ruled since his father was assassinated in 2001 with elections meant to have happened before his mandate expired in 2016.

The delays have left many doubting it would ever take place. Questions remain over how it will be conducted.

Congo's influential conference of Catholic bishops warned this week that an Ebola epidemic and clashes with rebel militia in eastern Congo could threaten the validity of the vote.

"We must do everything to avoid a parody of an election whose results would not be accepted and which would, moreover, plunge our country into violence," the National Episcopal Conference of Congo (CENCO) said in a statement.

Presidential elections in 2006 and 2011 were marred by accusations of fraud and violence after the results were announced.

CENCO also questioned the use of a new electronic voting system, which the opposition says is more vulnerable to vote-rigging than paper and ink and could be compromised by the unreliability of Congo's power supply.

To ensure the electoral results stand up to scrutiny, the electoral commission must make sure ballots are counted manually after they are printed by the machines, CENCO said.