By Stanis Bujakera and Fiston Mahamba KINSHASA (Reuters) - Security forces in eastern Democratic Republic of Congo fired live rounds and tear gas on Thursday to scatter demonstrators who burned tyres and ransacked an Ebola centre in protest at their exclusion from the presidential election. 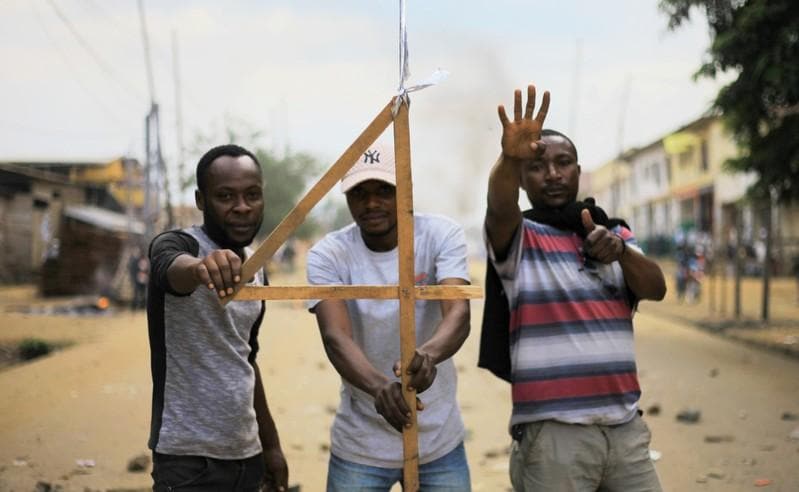 By Stanis Bujakera and Fiston Mahamba

KINSHASA (Reuters) - Security forces in eastern Democratic Republic of Congo fired live rounds and tear gas on Thursday to scatter demonstrators who burned tyres and ransacked an Ebola centre in protest at their exclusion from the presidential election.

The electoral commission (CENI) announced on Wednesday that it was cancelling voting in Sunday's election in the opposition strongholds of Beni, Butembo and their surrounding areas due to an ongoing Ebola outbreak and militia violence.

In another sign of the government's hardening stance in the run-up to the vote, the foreign ministry announced the expulsion of EU ambassador Bart Ouvry after the European Union renewed sanctions against officials including the ruling coalition's presidential candidate, Emmanuel Ramazani Shadary.

The EU Commission was not immediately available on Thursday evening to comment on the expulsion.

Sunday's vote is meant to pick a successor to President Joseph Kabila, who has ruled since 2001. If successful, it would mark Congo's first democratic transition after decades marked by authoritarian rule, coups and civil war.

Politicians in Beni denounced the CENI's decision as an attempt to boost Shadary and they called for protests.

"There was a group of demonstrators who wanted to enter the CENI office ... to demand the cancellation of the decision," said Giscard Yere, a Beni resident. "But the police officers and soldiers who were there fired to disperse the demonstrators."

Demonstrators also attacked the office of the government agency coordinating the response to the Ebola virus in Beni, said Aruna Abedi, the deputy director of the Ebola response.

"Protesters tried to force the door of the centre," Abedi told Reuters. "They were chanting songs hostile to the government and demanding elections. They threw projectiles."

Colonel Safari Kazingufu, the police commander in Beni, said three policemen were wounded while trying to restore order, including around the Ebola centres. Seventeen protesters were detained in connection with the attack on the centre, he said.

Beni, Butembo and their rural surroundings have been battling an Ebola outbreak - now the second-deadliest in history - since August. It is believed to have killed more than 350 people so far.

But health authorities had repeatedly said the outbreak would not prevent the vote from going ahead, and locals say it is being used as a pretext to disenfranchise them.

Returning to eastern Congo on Thursday to a hero's welcome after receiving the Nobel Peace Prize, Denis Mukwege, a vocal critic of the government, told a cheering crowd: "The emergency now is to save the electoral process which is deadlocked. The CENI and authorities of our country must fulfil their responsibilities."

The CENI has also cancelled the vote in the western city of Yumbi because of ethnic violence there last week that killed more than 100 people.

The opposition coalition behind presidential candidate Martin Fayulu has called for a nationwide general strike on Friday to protest over the cities' exclusion from the vote.

"It's too much, the CENI has crossed a red line," Fayulu campaign director Pierre Lumbi told journalists, calling on the CENI to cancel the decision.

The campaign of another popular opposition candidate, Felix Tshisekedi, also denounced the CENI's decision but stopped short of calling for it to be revoked.

The election to replace Kabila was meant to take place in 2016 but has been repeatedly delayed.

This has triggered violent protests in which security forces killed dozens of people. It has also stoked militia violence in Congo's eastern borderlands with Rwanda and Uganda as armed groups moved to exploit a perceived power vacuum.

(Reporting By Stanis Bujakera with additional reporting by Fiston Mahamba in Goma and Juliette Jabkhiro in Dakar; Writing by Aaron Ross and Alessandra Prentice; Editing by Mark Heinrich and Gareth Jones)