Colombian ex-president's defense team asks for case to be transferred

By Luis Jaime Acosta BOGOTA (Reuters) - The defense team for former Colombian President Alvaro Uribe, who is under investigation for alleged witness tampering, has asked for the handling of the case to pass from the Supreme Court to the attorney general's office. Uribe, who says he is innocent, resigned his Senate seat this week after being placed under house arrest at his country home earlier this month 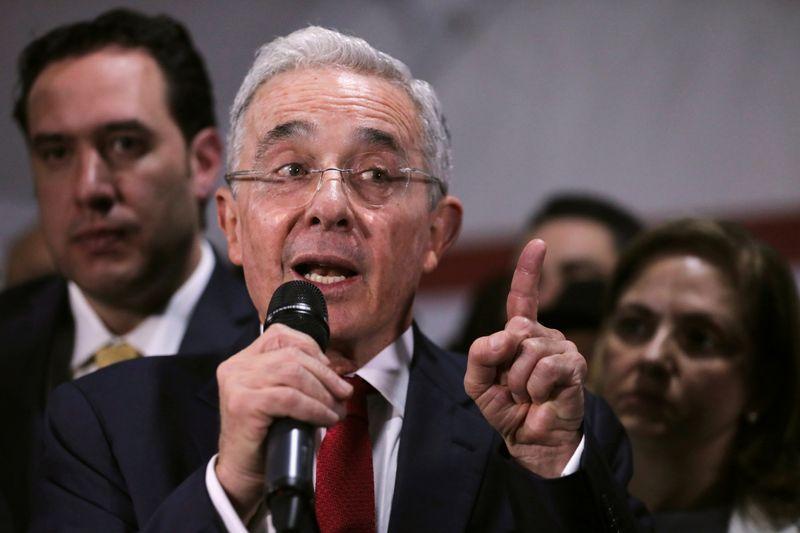 BOGOTA (Reuters) - The defense team for former Colombian President Alvaro Uribe, who is under investigation for alleged witness tampering, has asked for the handling of the case to pass from the Supreme Court to the attorney general's office.

Uribe, who says he is innocent, resigned his Senate seat this week after being placed under house arrest at his country home earlier this month.

The Supreme Court handles criminal proceedings involving lawmakers and high-ranking officials, but may face jurisdictional issues now Uribe is no longer a legislator.

Uribe's critics have alleged his Senate resignation is a ploy to place the case with a potentially less-rigorous legal body.

A court source and a member of Uribe's team both confirmed the request was presented by the defense team to the court on Wednesday afternoon. The court has five days to respond.

The Supreme Court cited the potential for obstruction of justice when it unanimously ordered the detention of Uribe, perhaps the South American country's most divisive politician. One of Uribe's sons has characterized the measure as a kidnapping.

It is the first time ever a Colombian court has detained a former president.

Uribe said in his Senate resignation that eight procedural guarantees had been violated and wiretaps which form part of the case were illegal.

Uribe's seat is expected to be taken up by whichever remaining candidate on his party's list from the 2018 elections got the highest number of votes.

The former president and several allies stand accused of engaging in witness tampering in an attempt to discredit allegations Uribe had ties to right-wing paramilitaries.

Kingmaker Uribe has shepherded two successors to power since the end of his second term in 2010, including current President Ivan Duque, who has repeatedly said he believes his mentor is innocent.