By Helen Murphy and Julia Symmes Cobb BOGOTA (Reuters) - Colombia's presidential election on Sunday will decide the future of peace with Marxist rebels and the nation's economic model as candidates from across the political spectrum compete with promises of jobs, safer streets and a crackdown on graft. Right-wing contender Ivan Duque, a protégé of former President Alvaro Uribe, has long been polling ahead of five other candidates with about 40 percent of the vote. 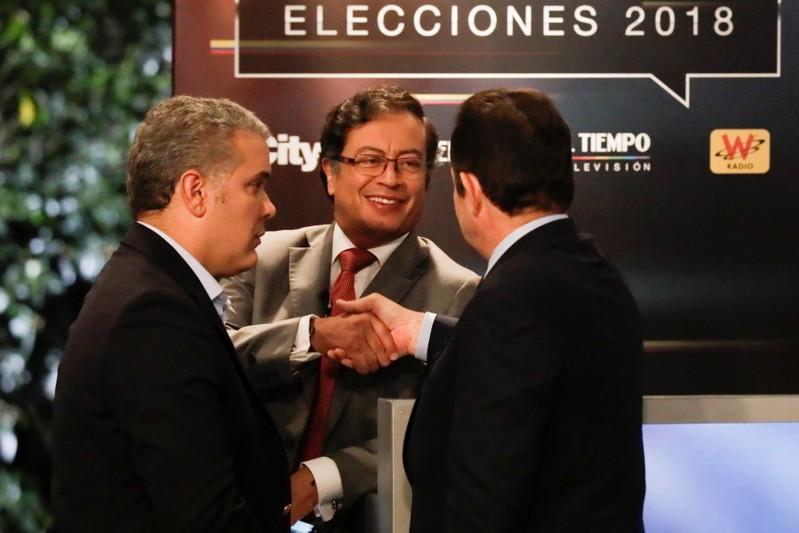 BOGOTA (Reuters) - Colombia's presidential election on Sunday will decide the future of peace with Marxist rebels and the nation's economic model as candidates from across the political spectrum compete with promises of jobs, safer streets and a crackdown on graft.

Right-wing contender Ivan Duque, a protégé of former President Alvaro Uribe, has long been polling ahead of five other candidates with about 40 percent of the vote.

Running second with about 30 percent is leftist former M19 rebel Gustavo Petro, a combative populist who has galvanized support from millions of young people fed up with Colombia's right-wing status quo.

If no candidate gets over 50 percent, the top two will go to a second round on June 17. Unreliable polls mean centrist Sergio Fajardo and center-right German Vargas may have a shot.

At stake is whether Latin America's fourth-largest economy will abandon its traditionally market-friendly posture, as well as the future of the peace deal with Revolutionary Armed Forces of Colombia (FARC) rebels.

Campaigning has been marked by candidates' accusations that their rivals will either collapse the economy or force Colombia back to the battlefield.

"These elections are among the most important we've lived since we've had a political consciousness," said Jorge Valderrama, who manages Colombia, Central America and the Caribbean for head of BNP Paribas. "The country's model is going to be decided."

Business-friendly Duque has promised to overhaul the peace accord signed in 2016 with the FARC, appealing to those who say the deal was too lenient and want former guerrilla commanders jailed for crimes committed during their half-century insurgency.

Petro, by contrast, has promised a complete overhaul of the economy to take power away from the social and political elites he says have dominated Colombia too long. His tax changes would raise duties on dividends, eliminate loopholes and hike charges on unproductive land.

Investors have expressed worries about Petro's plans to spend big on education and healthcare and eliminate extractive industries. Colombia's top exports are oil and coal.

"Petro is a grave danger," said Bertha Infante de Garavito, 80, a residential building manager in Bogota, who fears his policies could drag Colombia into the kind of economic crisis seen in neighboring, socialist-run Venezuela. "The exact same thing will happen to us."

Though he was never a combatant, Petro belonged to the M19 urban rebel group, which demobilized in 1990. He has often been hailed as an example of how ex-rebels can successfully transition to peaceful politics.

But he has also been slammed for poor management while mayor of Bogota. He was ousted from office for allowing garbage to pile on the streets for days.

Given that, Fajardo may be able to win enough support from centrists who dislike Petro to reach the second round. Vargas is backed by two strong party machines and incumbent President Juan Manuel Santos, which may yet turn out significant numbers of voters for him.

The peace deal, which won Santos a Nobel Peace Prize, saw thousands of guerrilla fighters hand over their weapons and join a reintegration process.

But Vargas has an abrasive public image and a lack of charisma that puts off many voters.

Duque, 41, is seen as more personable but has been dismissed by many as too young and inexperienced to run a nation of 50 million people with a struggling $324 billion economy.

A one-term senator, Duque worked at the Inter-American Development Bank in Washington until 2014, when Uribe asked him to return to Colombia and take a seat in Congress.

Analysts worry his tax cuts could create a revenue gap and some believe he will be heavily influenced by Uribe, known for his harsh offensives against the FARC and presiding over a buoyant economy during his 2002-2010 administration.

Petro supports the peace deal, as do Fajardo and Vargas.

Duque will have an easier time with Congress if elected - following congressional elections in March, his Democratic Center party has more Senate seats than any other and is in second place in the lower house. Petro's party has only six seats in Congress and he would face an uphill battle to pass legislation.